A recent study of 1,000 38-year-olds shows ‘biological age’ ranges from 30 to 60. What’s your aging rate? I mean, how old are you really? Hint: your chronological age doesn’t count.

WHAT DO you most notice at high school reunions?

Yes, everyone is about the same age, but there’s a pronounced disparity between how the oldest-looking and youngest-looking appear. After you’ve gotten a few reunions under your belt you come to realize that people can age very differently.

Many of us, in effect, have different aging rates.

But appearances can be deceiving, you say, and how one looks externally many have nothing to do with what’s going on internally: “You can’t tell a book by its cover”. Well, contrary to that adage, when it comes to aging, it’s likely that if you look old, you are from a biological perspective.

A group of Duke University students proved the point. They were asked to look at pictures of people in a study I’m about to present to you, and asked to rate who among them were aging more quickly than the rest. By and large, the students were spot on. (1)

Perhaps you know some sailor that’s always on the open sea getting all that salt and sun on his skin, and over the years had developed that “weathered” look, but other than that is really fit and not aging too quickly.

Yeah, could be… but more it’s more likely that if you look old on the outside, the inside stuff is not doing any better.

The Aging Rate Is Observable As Young As 28

You figure that by the time someone is, say, 50 years old, enough time has passed for those who’ve made poor lifestyle choices to look older than their healthier counterparts.

What’s shocking is that you don’t need 50 years to accumulate such a gap. In a study recently published in the Proceedings of the National Academy of Sciences, researchers discovered that the biological age of our bodies could begin to significantly depart from their chronological age as early as 28!

It’s called the “Dunedin Study”, after the city in New Zealand where the research was conducted. This is the study where the Duke students picked out the fast agers from the rest.

In the Dunedin Study, scientists tracked 26, 32 and 38-year-olds, and found that while most of them aged at a normal pace — one year’s worth of physiological changes for each chronological year — some of them aged surprisingly slower or faster.

What’s more, the older their biological age, the worse they fared on physical and mental acuity tests. The fast-agers showed worse balance and poorer motor coordination, and reported having more trouble with tasks such as climbing stairs or carrying groceries.

Moreover, those who were aging fast also showed evidence of cognitive decline. Their IQ scores, which according to previous studies have been shown to remain relatively constant throughout a person’s life, were lower by age 38. (2)

I’ve often said that chronology doesn’t necessarily equal biology, and this study underscores this contention. Some people age more than the norm for their chronological years, and some less, and that’s the biology of it.

Generally speaking, people who get excessive sun exposure, smoke, drink more than two servings of alcohol per day, are chronically stressed, don’t move much, get poor nutrition and insufficient sleep are going to age faster.

Nearly one thousand people born in 1972-73 in Dunedin were tracked. Their “biological age” was calculated 20 years after their 18th birthdays based on the above measured biomarkers.

This graph tells the tale: 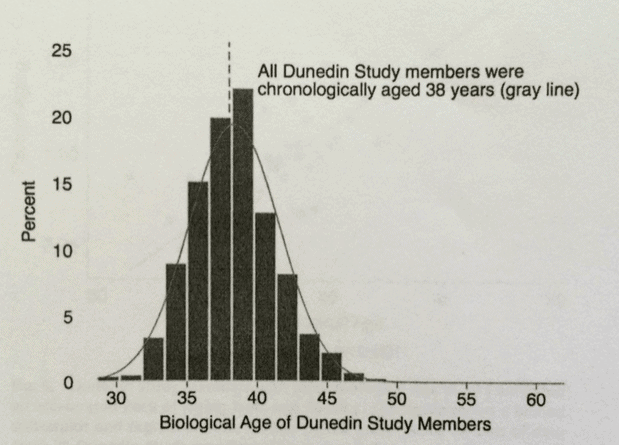 As you would anticipate, most people aged similarly – meaning, that their biological age approximated their chronological age, and that’s why you see that the tallest vertical bars in the graph are between 35 and 40.

But like with many things measured, you get a lot of data clustered around some norm, as well as the inevitable outliers. Some 38-year-olds were biologically 50 and over; whereas some others were less than 30.

Think about it for a moment. If only 20% of how fast we age is due to genetics, then one might presume that 80% of the slow and fast agers are experiencing their respective aging rate due to the choices they make.

Yes, as you would expect, behavior matters greatly.

Watch Dr. David Agus’ commentary on the Dunedin Study, and makes suggestions on which good habits underscore a slow aging rate.  As he says, the earlier you start, the better the outcome.  That said, now is the only moment you have to work with, so start now.

In a moment, I’m going to list six steps you can begin to take now to slow your aging rate, and also reveal my 12 Ageproof Building Blocks. But first — as I’ve written in Reverse Engineer Longevity — Three Ways Your Environment Creates A Long and Strong Life, and Want 10 Extra Years? It’s Easier than You Think!, there are many thousands of people around the world in the so-called “Blue Zones” that age better than the rest of us.

Lessons From The Blue Zones

The advantage the Blue Zoners have is not genetic, and even if that were the case, as mentioned, we know from studies evaluating identical twins (the same genes) with unhealthy vs healthy habits that genetics accounts for only 20% of our aging rate.

If not genetic, why do so many people in the Blue Zones age better than those in the rest of the world?

Their advantage is their culture. Whether they’re in Okinawa (Japan), Ikaria (Greece), Sardinia (Italy), or the Nicoya peninsula (Costa Rica), all these long-lived, hale people share certain characteristics, a blueprint if you will, for how to to live a long and strong life.

These people do not have to develop will power or discipline. The way they grow up and their environment cultivates within them the habits they need to slow down their aging rate.

How do they do it, these Blue Zoners?

Let’s let Dave Buettner address that question. He’s the guy who researched, and has written about the Blue Zones for National Geographic.  What follows are a series of Buettner’s quotes lifted from Gulf News:

“People in the Blue Zones areas don’t run marathons or do hot yoga. They move throughout the day by walking, gardening and chopping wood. They wake up with a sense of purpose and could articulate it in what we might call a personal mission statement. Each day they take time to unplug and de-stress and downshift. It can be meditating, napping or spending time in nature”.

“They eat smaller portions and next to no processed food. Essentially, they stop eating when they are about 80 per cent full. They eat plant slant of mostly vegetables, grains and fruit. They are not pure vegetarians, but they typically eat meat about three times a month mostly during holidays and celebrations.”

“Face to face time with people matters… They keep their aging parents close, they have monogamous healthy spousal relationships, and they nurture children… Spending time with family and close friends, especially across generations, contributes to health, longevity and success of all the family members.”

“… research show[s] that obesity, smoking, happiness and depression spread from a person to person-through social networks, much like a virus during an epidemic. People need fun, interesting activities to enjoy with their friends. A community or workplace campus that provides interesting places to play and be active or inspire curiosity and learning adds exponentially to the well-being of its members. Since we know that social networks are contagious we look for ways to connect like-minded people.”

“It’s the culmination of small changes that over time make the biggest impact on health.”

What Can You Do Right Now?

You can take six steps to help ensure that you’re among those on the left side of that bar graph, the one about whom your fellow “reunioners” will gasp,

Step #1: Scroll back up to that bar graph and decide where you want to live your life.  If the answer is “on the left hand side where your biological age is less than your chronological age, then go to step #2.

Step #2: Identify the lifestyle habits you have that will keep you in the middle of the graph, or push you to the right.  These can include a stress-packed life, smoking, insufficient sleep, poor nutrition, no exercise, obesity, etc.

Step #3: Choose one bad habit at a time to eliminate, recruit someone to help you and slowly, incrementally reduce that habit till it’s gone. (Read How To Make Tiny Habits Big (and a back-up plan).)

Step #4: Identify and make a list of the good habits that you want to be part of your lifestyle. Choose one at a time, and recruit someone to help you and slowly, incrementally build that habit.  (Read 4 Steps To Make Your Goals Smart and Achievable.)

Step #5: Familiarize yourself with the 12 Ageproof Building Blocks listed below, which are the centerpiece of a book I’m writing, and make your environment be like a Blue Zone.

Step #6: Become a Subscriber to this site so you can learn more about how to live a long and strong life, age at a slower rate, and be alerted when the book is available. (Go here.)

Go Deeper, Youngster >
Share. Someone you know will be thankful.