Get Younger and Better with Kirtan Kriya Meditation

Improve your biomarkers associated with aging and feel a hell of a lot better every day with Kirtan Kriya Meditation.  Get prepared to soar! 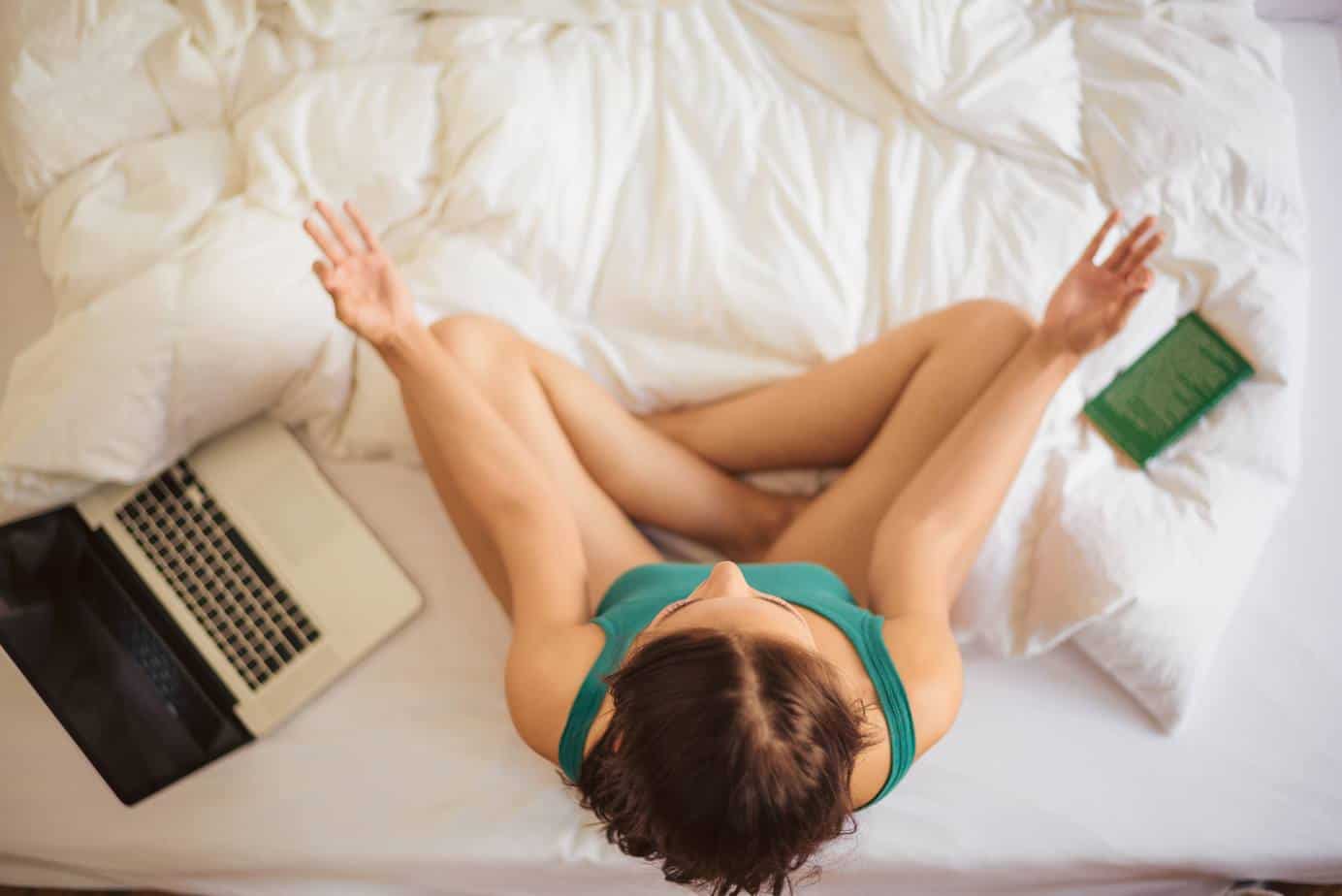 WOULD YOUR self-image allow you sit and chant for 12 minutes?

Frankly, even though I’m a practiced meditator I would have answered something like, “Self-image or not, chanting is not my thing”.

That’s before I read Dr. Kelly Brogan’s article, Change Your Life in 12 Minutes A Day, and then looked up a particular meditation chant track she recommended by Nirinjin Kaur called Kirtan Kriya. Within three minutes of listening to it, I began to tear up. I have no idea why — perhaps it was just one of those strange moments — but I was intrigued.

And so should you be.

Because teary-eyed or not, according to this study on yogic meditation (among others), doing this type of meditation for 12 minutes a day can yield the following benefits in just eight weeks with no side-effects or cost:

According to Dr. Brogan, since 2003 Dharma Singh Khalsa, MD and his team have been carrying out research on a kundalini yoga meditation called Kirtan Kriya.  Published trials catalogued here, demonstrate changes in brain perfusion, decreases in inflammatory gene expression, and dramatic increase in telomerase (a longevity enzyme) that correlates with subjective sense of wellbeing, energy, sleep, memory, and even a 65% improvement in depression scales.

The Kirtan Kriya track is playing right now as I write this. After a minute or two, I found myself softly chanting the mantra.

The short version (above) ended much too quickly, so I found and am now playing the longer one.

Get Your Head Straight With Kirtan Kriya Meditation

This whole meditation is of particular interest to me given that the first biohack I wrote about in my forthcoming book on aging better is called Create Your Day in 5 Minutes with Biohack #1.

The reason the first biohack (among 12) involved in slowing down the aging process has to do with mindfulness and meditation is that if you don’t get your head straight, everything else in life will be crooked.

In the “5 Minutes” article, I wrote about Jean, a caretaker I know:

“She takes care of her two children, her husband and elderly mother who lives with her family.  Jean also works full time.  Every minute of her day is spent in the service of others, and she’s exhausted.

“Although I don’t know this to be true, like many caretakers, Jean may be chronically stressed in a way that affects her adrenals and the length of her telomeres. That this could be true is not ignited by some stretch of the imagination, but by the dictates of biology, as we we’ll discover.

“In the past, Jean would bolt from bed early in the morning to turn off the alarm clock, and then robotically rush to attend the needs of everyone in her household, while somehow getting herself ready for work as well.

“That’s no longer the case.  She’s now first preparing herself for the day by intentionally crafting it. Each morning, Jean spends five minutes doing a mindfulness practice that creates her day, one no longer rushed, mindless or harried.”

Those bulleted benefits cited above after eight weeks of consistent Kirtan Kriya Meditation practice are what Jean is now experiencing, and so could you. 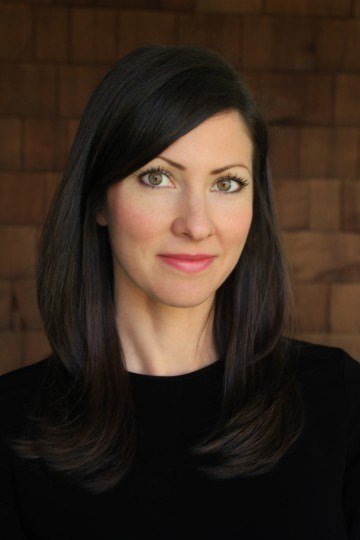 Dr. Brogan writes that in her medical practice, she seeks to help patients experience transformative changes, not simply the suppression of symptoms.

She knows of what she speaks.

Kelly Brogan, M.D. is a Manhattan-based holistic health psychiatrist, and author of the NY Times Bestselling book, A Mind of Your Own. Her “holistic” bend attracts her to meditation, but it’s the effectiveness of mediation that leads her to whole-heartedly endorse it.

After years of following the literature on mindfulness meditation, all I was left with was a sense of frustration and guilt that I could never commit to “watching my thoughts”. It wasn’t until I began with 3 minutes of a kundalini yoga meditation that it stuck. My monkey mind had found the perfect hammock to chill out in.

Kundalini yoga, which includes, Kirtan Kryia, is a one-stop shop for mental, physical, and spiritual transformation. In Dr. Brogan’s case it has turned her from, in her words, “… a neurotic, controlling, agro workaholic into someone who experiences grace, bliss, and a trust in the process so deep that I no longer even relate to ‘stress’”.

It’s likely that you’re going to live for the next eight weeks. At the end of those eight weeks, you can either be just as you are now, as wonderful as that may be, or you can be an improved version of yourself.

Consistent practice of this mediation can develop four characteristics to enable you to reach peace of mind, says Dr. Dharma Singh Khalsa:

A reasonable question to ask is,

“How does focused chanting make you so healthy and righteous?”

Dr. Brogan takes a shot at answering this question. She says:

Speaking to that last bullet point above, I have some pictures to share of brains before and after Kirtan Kriya Meditation. These come from an article written by Dr. DK Khalsa presented by the Journal of Alzheimer’s Disease in this pdf file.

Stay with me here, because in order for you to get what you’re seeing, I’ll need to do some explaining. This is worth paying attention to if you appreciate knowing that the various declarations made here are backed-up by science.

Strangely, moving the fingers in a set pattern is part of what makes changes in the brain. (This is addressed further below.) When you utilize the finger-tips in conjunction with the sound, specific areas in the brain (as seen on SPECT scans) are activated and indicate significant cerebral blood flow changes during the practice of Kirtan Kriya. Such blood flow activation in the brain may have a beneficial effect or provide protection against neurodegeneration.

As shown in the picture below, the frontal lobes exhibit increased cerebral blood flow.

The next picture shows that the posterior cingulate gyrus (PCG) is also activated. This is relevant because the PCG is highly connected to other important anatomical areas and one of the most metabolically active regions in the brain, and it is critically important for many types of memory and emotional functions. 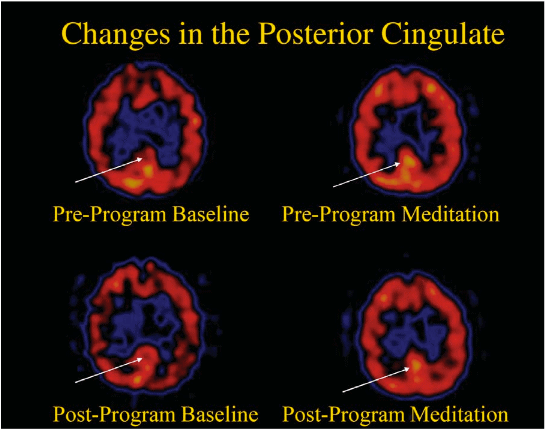 Reduced cerebral blood flow and hypometabolism (abnormally low metabolic rate) in the PCG are early signs of dementia/Alzheimer’s and is frequently present before a clinical diagnosis is evident, indicating a particular vulnerability to neurodegeneration.

The last brain picture shown below is a before and after look at person’s brain who practices Kirtan Kriya Meditation. The brain on the left is smaller and has dimples in the top part of it. These dimples signify a lack of blood flow. The after scan shows a symmetrical brain with increased blood flow, potentially representing an improvement of function. 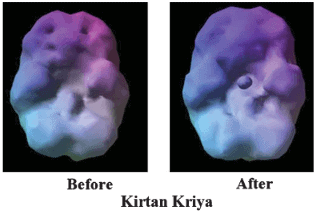 If all this has been too sciency for you, just remember this:

Kirtan Kriya Meditation is very very good for you!

How To Do Kirtan Kriya Meditation

By now you’re probably bursting with the desire to experience this meditation, right? You looked everywhere and were delighted to find 12 extra minutes lurking in the corner.

The videos above were audio only, so a description about how Kirtan Kriya Meditation is done would be helpful so you can experience it.

Since Kirtan Kriya Meditation is new to me, let’s rely on an adept practitioner to guide us; namely, Dr. DK Khalasa per his description in Stress, Meditation, and Alzheimer’s Disease Prevention: Where The Evidence Stands (this is the pdf file mentioned above.)

Sit comfortably in a chair with your feet flat on the floor. The essence of the posture is to be comfortable and sit with the spine straight and set to its natural curvature.

Close your eyes. Breathe naturally as the meditation unfolds. Through the nose is best. Let you abdomen, lungs, chest and back expand with each inhalation and contract with each exhalation.

Kirtan Kriya Meditation uses the sounds, Saa, Taa, Naa, Maa. Refer to the video above for the cadence.

With the hands on the knees, the thumb is touched to each of the other four fingers in sequence. Both hands perform the same movements simultaneously:

The sound is visualized coming down from the top of the head, and out the middle of the forehead in the center, lined up with the nose like a capital letter “L”.

One may think of this action as sweeping through like a broom. 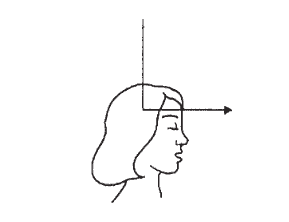 The sounds Saa Taa Naa Maa are utilized while also performing the movements with the fingers of both hands. At the same time, the sound is visualized flowing in through the top of the head and out the middleof the forehead in an L shape.

When outside thoughts intrude, simply return your focus to the sounds and visualization.

This will complete the 12-minute meditation.

A digital clock, timer, or watch can be used to time the exercise, rather than an alarm.

To come out of the exercise, inhale very deeply through the nose, stretch your hands above your head,and then bring them down slowly in a sweeping motion as you exhale through the nose. Take a couple of deep nasal breaths before opening your eyes and resuming your normal activity.

So, just do this:

That’s what I’ll be doing.

The Kirtan Kriya Meditation tract is still doing its chant thing as I finish this; it sure made writing this easier.

Saa Taa Naa Maa to you.

P.S.  Want more information about how meditation can improve your life and reduce your aging rate?

P.P.S. A book that may interest you: