Just “Exactly” How Fat Are You Anyway? 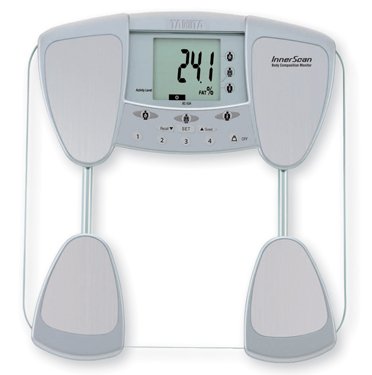 What would you do to find out what percent of your body is fat?  Archimedes came up with a pretty infallible test.  Most of the rest are proxies, pretenders at best.  In this post, I examine how worthless the BMI measure is for many, and what the military has to say on the matter. Check out the equations, BMI widget and charts. 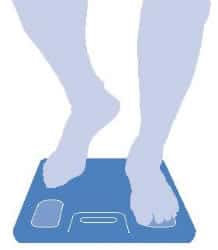 OVER THE last two days, I’ve been obsessed with measuring fat.

Not how much fat is in a particular food whispering to me.  Not how much covers my own real estate, nicely spread out, I might add.  But how much – measured as a percent of body mass – is in, and on, every body?

This is a long story, and over time I’ll get it out on this blog in sufficient detail to make you batty, but suffice to say for today:

I want to find a way to quickly, easily and accurately measure body fat!

What’s led me to this quest is part of that aforementioned long story; this part:

As I’ve gotten older, this boomer body that once was the high temple of athleticism has over the years, very slowly, certainly imperceptibly month-to-month, gotten fatter.

If you’re seeking to answer that very same question, then read on…

About 15 years ago, my perennial 34” waist sized pants inched up to size 36.  Now big deal, because you know what?  My upper body got a bit larger too.  So the whole package looked about the same.  Same proportions.

Yes, the resistance training (aka weight lifting) kept the muscle going and the muscle kept the fat from sagging, but you know what?

It’s been dawning on me that if I take off my shirt and peer bare-chested at the mirror, it seems like some cruel artist took a thick paint brush dripping with fat and layered it on sufficient for me to more resemble the Pillsbury dough boy than ever before.

(Ahh, well, I did have that one pre-teen year when my father was stationed in Ethiopia that I was miserable, and – apparently – ate myself into to a so-called “husky” pant’s size.)

There are reasons for this beyond my own fault.

Yes, it’s not my fault that as I got older certain aspects of my socialization shifted, like from charging up Mt. Tamalpais on mountain bikes with my buddies to swirling some red wine around a glass to see what kind of “legs” it presented.

And it’s not my fault that as I got older certain aspects of my biology shifted around a bit, producing relatively more estradiol than testosterone than before.

Certainly, it’s not my fault that I actually got older.  Can’t beat that, can you?

(Actually, you can surely slow it down, because chronology does not equal biology, as you can learn about here.)

“Just how fat are you now, Joe?”, I asked the plump figure in the mirror.

Right behind me against the wall, I have something that should be able to tell me, a Tanita BC534 Glass InnerScan Body Composition Monitor

.  This means a scale that can suggest what percent of your body is fat. 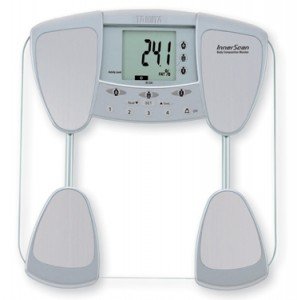 In the sentence above, I carefully selected the word “suggest” when describing what Tanita and every other scale does that attempts to measure body fat by a technique called Bioelectrical Impedance Analysis.

You push a button, step on the scale and an unfelt, harmless electrical current passes through your body with greater impedance in the lower water containing tissue, such as fat, than fat-free mass which contains more water. This difference is measured and out pops a reading of your body fat percentage.

The Interpretation of that electrical resistance is, in part, left to certain formulas, and they cannot account for shifting variables.

These variables include age, gender, ethnicity, body size, fitness level and how much water you’ve been drinking.  (It’s probably not enough water and that will make the scale suggest that you’re fatter than you are.  Or not.)

What it all boils down to is that you can not be certain that the egregiously high percent body fat number that gets displayed on the scale’s LCD panel after the electricity gently pervades your body is the right number.

And that’s a relief because when you see that truly big number pop up and your heart starts racing, you’ll soon remind yourself that it might just be wrong, that you might not be quite that fat.

“These damn scales just ain’t accurate!”, you’ll mutter to yourself, because no way you’re going to let anyone else near you and that scale.

Lordy Be, I’ve Got Cognitive Dissonance

So, I know what the Tanita will tell me and I’ve been slow to accept it.  “I simply can’t be that fat”, I sputter.

Although that image in the mirror might have shades of P. Boy… after a good weight lifting session, a roll in some olive oil, dimmed lights and some squinting — why, there’s my former lean mean muscle machine self peering back at me.

The psychologists call this “cognitive dissonance”.

I’ll give you the link, but this is worthy of copying the definition here cause it underscores my point (which assumes I know where all of this is going, but I don’t… not yet…), and that is:

Embarrassment… a bit, after all, I’m a health blogger!

Now, truth be told, if I’m willing to believe Tanita, she suggests I’m only about 10 pounds overweight, depending what is the right percent body fat for me.

Which leads me a step closer to the whole point of this post:

What Percent Fat is Too Fat?

There are two answers to this question – yours and scientists.

And you give yourself your own acceptable level, the athlete’s being lower than the couch surfer’s.

A quick scan of the above chart will show that it’s OK from a health perspective to be relatively fatter as you age, but that such healthy fat levels are quite a bit lower than those associated with being overweight and obese.

If my readers’ bodies have the overall fat distribution of the U.S. population, there’s a 6- in-10 chance that you are in the yellow or orange section of the chart, and a 3-in-10 chance you’re orange.

And yet, I bet that you really don’t know what color you are, speaking contextually.

And, I bet that if you could turn around and grab your Tanita sitting against the wall of your bathroom, push the button, stand on it, peer down at that insulting number which races your heart, you too wouldn’t believe it.

And the fact that you might be justified in not believing it is why for over the last two days I’ve been obsessed with measuring fat.

You and I — we just want another opinion.

BMI Nonsense, and The Search for the Perfect Fat Measuring Algorithm

“BMI” stands for “Body Mass Index”, and is a proxy for human body fat based on an individual’s weight and height. Unfortunately, BMI doesn’t actually measure the percentage of body fat; rather, it’s a simple numeric measure of a person’s “thickness” or “thinness” relative to an average distribution of people (adults) in the population. 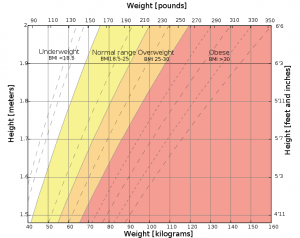 For your convenience, here’s a widget to calculate your BMI:

The odds are that your BMI fairly represents where you sit on the chart relative to the rest of the population.  But if you’re particularly short, or tall or muscular, or an athlete (weekend warriors are disqualified), then the BMI results for you are phooey.

BMI simply does not account for non-average muscle size, density or frame size.

I’m large framed, tall and lift weights regularly.  I wonder what BMI would say about me?

I popped my numbers into the BMI widget: 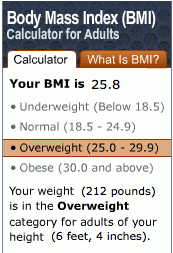 Which brings me back to my “cognitive dissonance”, for as you can see, with a BMI of 25.8, I’m considered overweight.

Overweight on the above Body Fat Ranges chart (OK, they call it “Overfat”) would put me at around 23% body fat.

Even Tanita isn’t that cruel!

I want another approach.  Enter stage right, the Navy and Air force (and others) to the rescue.

The Navy, Air Force and Whatever Algorithms

Let’s cut to the chase – these fine institutions recognize that BMI ain’t where it’s at, that there needs to be some way to factor in density, muscle and frame size.

The Navy, Air Force and others came up with proxies – decent representations – for density, muscle, fat and frame sized based upon thousands of data points that show a strong relationship between certain physical parts and these attributes.

Here are some examples of the equations:

The bad news is that I don’t have a handy widget for this to present you so you can calculate your own body fat via this method.

The good news is that you can use these formulas in Excel, plug in your numbers and get your results.

My result was 19% body fat… lower than what BMI suggests and Tanita whispers, but leaving me stuck in my cognitive dissonance nonetheless.

So, I’m going to stay obsessed with this… in fact, I’m seeking to come up with my own simple and accurate body percent fat calculation method… till I get what I want to hear… err, I mean, till I get it right.

Have you any thoughts on this matter?

If so, please submit them in the Comments section below.

Do You Have COVID Symptoms?

Inflammation and Age In The COVID-19 Pandemic