When life puts you in a hard place, you scramble to find out why.  The mind lurches backward, picking away at clues you may conjure, and then stumbles forward into a future projection of fear or fantasy.  Is there value to simply stay in the present? 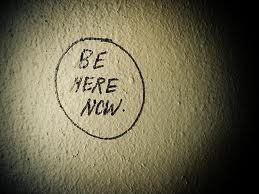 OVER THE past weekend I had a visit from an ole college friend now living in Copenhagen.  He married a Danish lass, and after starting the family in Portland, they decided that their two kids would get a better education and learn more of the world in Denmark.

Each year, “Tom” travels to the Bay Area (California) to visit his parents.  Both in their mid-eighties, they’re now at the stage of life where they need his and her sister’s help.  She lives in Mexico.

Unlike me, Tom’s always has been a diligent and consistent worker. After the last ten years with IBM, he was caught in a downsizing downdraft last month and spun out of employment.

We had lots to talk about; our venue was a long walk through the hills of Sausalito.

So, here we are, Tom and I drifting along in a modern stereotype: Two unemployed 50-something year-olds caught between the generation that made us and that which we made (in Tom’s case), like a deer in the headlights.

That was Tom’s voice. I had already answered the question for myself a thousand times, each with it’s own unsatisfying twist, as if one could be bend the light to illuminate.

We had both gone to good universities, graduated with technical degrees of sorts and did well in our careers for a while; he a longer while than me.

Now, we’re aimlessly wandering around hill and dale picking away at whatever shreds of understanding the winds of change have not blown away.

“One foot after another”, I replied to his question.

Tom didn’t even bother to grin at that remark, as his brain’s neurons were hopping synapses in a flurry.

“I was reading Ekhart Tolle”, the other day, he said.

“Which book, The Power of Now or A New Earth?”

“I mean, think about it,” Tom continued, “Right now we couldn’t want for anything. Right now.  Here.  The sun warms us, the air is fresh and fragrant, we’re getting exercise and that cappuccino we just drank was delicious!

“So, what Tolle is saying is that it’s only when we conjure up the past, which no longer exists, or project the future, which has yet to exist, do we get all wound up and off kilter.”

Four more strides in silence, then I responded:

“I’ve given this a lot of thought, Tom.  I read Tolle after having read several books on Buddhism.  The Buddhists say that to be alive is to suffer due to attachments, and that the solution to suffering is to drop the attachments to things.

“At the time I was reading this Buddhist stuff about 20 years ago, I was at my first inflection point in my career.  I was seeking to understand where I was in life and how to move forward.

“I was stuck at what I perceived to be a dichotomy in this Buddhist philosophy – if the aim is detachment, how do you cultivate the energy, focus and drive to create anything good in your life?

“What is produced without desire?  This was my quandary.

“Which ties into Tolle’s, (and Ram Dass) admonition to, in effect, be here now… not in what happened yesterday or may happen tomorrow.”

Tom looked up and at me thoughtfully, encouraging me to blab on.

“Well, assuming you’re not in pain, the present moment is a relatively suffer free zone.  The suffering the Buddhists refer to happens in the mind and it happens when the mind is sifting through the past or projecting an unhappy future.  Tolle says the same thing.

“This doesn’t mean that you can’t want something to happen in your life, but that you need to be detached from it unfolding exactly like you want it.”

Tom has a way of scrunching his forehead and twisting down his mouth in a wonderfully unique expression of a frown, which is what he did.

“OK, this is inane, but what if you had yourself all twisted in a knot over the blond next door.  You grew up together and you just knew that she was the one you had to marry or your life would be shit.

“She marries someone else, and, as you’ve determined it, you’re life proceeds to be shit.

“Rather than having been so attached to an outcome where only the blond next door could have been your wife, the Buddhist/Tolle slant would suggest that you focus instead on the feeling you want to cultivate in a marriage and seek to attract the person who could help provide that. This way, you would not have completely missed the sultry brunette that lived just a block away who wanted you.”

The next four strides extended into another mile in silence as two unemployed boomers were left to their respective thoughts about a future, with or without suffering.

I know which I’ll endeavor to have.