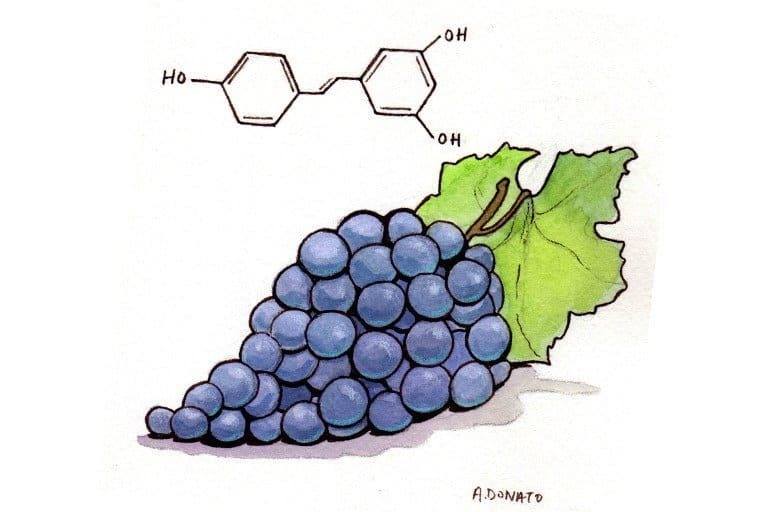 I want to tell you all about trans-resveratrol, but we need to begin with the plain vanilla variety, resveratrol. There’s been much written about resveratrol over the past few years. Some studies showed that it conferred sufficient health benefits among animals cohorts — even extending the lifespans of some. So promising was resveratrol that, as reported by life sciences journalist Luke Timmerman, the pharmaceutical giant GlaxoSmithKline paid $720 million to acquire Sirtis Pharmaceuticals, the one-time hot biotech with a plan to fight diseases of aging.

Sirtis sought to make drugs that act on sirtuins, a class of proteins that scientists believe play a role in aging, programmed cell death, and other key cell processes. It all looked good until it wasn’t. Glaxo shut down the company nearly five years after its acquisition.

That was seven years ago. In the intervening years, much more research has been done on sirtuins and resveratrol. Recently, as described by a 2019 study that looked at sirtuins on cellular senescence and aging, sirtuins have been shown to increase lifespan in some organisms (mainly yeast, worms and flies), and resveratrol has been shown to activate them. Studies on how activating sirtuins might increase human lifespan are less clear. Nonetheless, various sirtuin-activators, such as resveratrol, its cousin pterostilbene, and the NAD-precursors NMN and NR, have become very popular supplements to the anti-aging crowd, of which I’m an unrepentant member.

Resveratrol is a stilbenoid, a type of natural phenol, which is mildly toxic and produced by numerous plants in response to ultraviolet radiation, injury, fungal or bacterial infection. Resveratrol is concentrated in the skin and seeds of these plants, and has a remarkable range of biological activities, such as anticancer, cardioprotective, neuroprotective and antioxidant properties [1].

Resveratrol became well known for its “French Paradox”, a catchphrase first used in the late 1980s, that summarizes the apparently paradoxical observation that French people have a relatively low incidence of heart disease, while having a diet relatively rich in saturated fats. This is an apparent contradiction to the widely held belief that the high consumption of saturated fats is a risk factor for heart disease [2].

Apparently, the French were on to something. A large number of preclinical studies have proved that resveratrol could impact a variety of the diseases that many of us are afflicted with [3]. My search (on December 3, 2019) from the database of the new ClinicalTrials.gov shows that there are 162 clinical trials involving resveratrol that aim to investigate the pharmacological activity of resveratrol in treating cancer, diabetes, obesity, and other cardiovascular and neurodegenerative diseases.

But there’s a problem with resveratrol — all of the therapeutic benefits attributed to it are encumbered by its low bioavailability. In other words, most forms of resveratrol supplementation are not well absorbed by your body, and therefore its potential health benefits are blunted.

The good news is that researchers have focused on designing and synthesizing derivatives of resveratrol to enhance the bioavailability and its pharmacological activity. One of these is trans-resveratrol; it has been demonstrated to get into your bloodstream quicker and linger longer. And the best resveratrol supplement product you can get doesn’t stop with trans-resveratrol, but includes a propriety form of extract obtained from black pepper fruit extract called BioPerine®, which further enhances bioavailability, as you’ll soon see.

Why The Best Resveratrol Supplement is Trans-Resveratrol

The safety and tolerability of resveratrol as a medicinal product have been investigated in clinical trials [4,5]. Doses of resveratrol of up to five grams per day taken for a month have been found to be safe and well tolerated in humans [5,6]. But the absorption issue remains — the plasma (blood) concentration and tissue distribution are low [7,8].

Of the various types of chemical structures that make resveratrol, the main one that confers many of the health benefits in resveratrol studies is called, as mentioned, “trans-resveratrol”, but the type of reseveratrol in most resveratrol supplements is known as “cis-resveratrol”. These two look different, and are different.

The Chemical Structures of Trans and Cis-Resveratrol 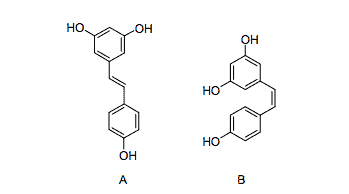 Study after study has demonstrated the superiority of trans-resveratrol over other types of resveratrol, such as cis-resveratrol:

This is not to suggest that regular resveratrol has no therapeutic value; it does. Consider this summary from Healthline.com that lists documented evidence of what even regular, low-absorption resveratrol might be able to do:

BioPerine® is a patented extract obtained from black pepper fruits (Piper nigrum) standardized to contain a minimum of 95% Piperine. It’s used safely and extensively as a bioavailability enhancer for over 20 years [21].

An in vivo study (taking place in a living organism) conducted by the University of Wisconsin showed that BioPerine® significantly improved the bioavailability of Resveratrol by 229% and the maximum serum concentration was increased by 1,544% [22].

Another study examined the effects of resveratrol and piperine supplementation in combination with exercise training on muscle mitochondrial capacity of the forearms of sixteen healthy young adults.

The volunteers were given pills containing placebo or resveratrol (500 mg) + BioPerine® (10 mg) combination for four weeks. All participants performed three sessions of sub-maximal endurance training of the wrist flexor muscles of the non-dominant arm every week. 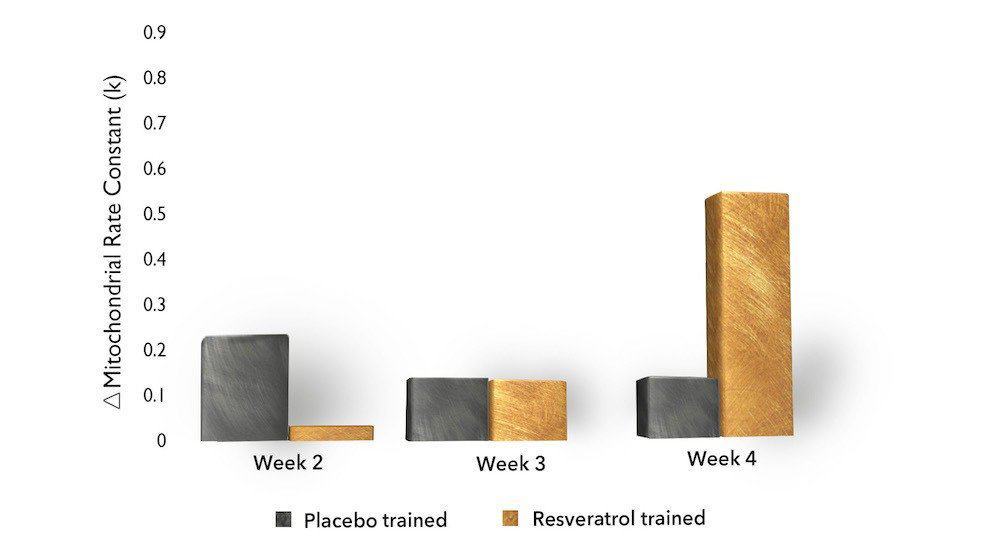 Clearly, supplementation with resveratrol and BioPerine® combination improves the bioavailability of resveratrol (true even trans-resveratrol), and might be helpful in enhancing skeletal muscle mitochondrial capacity during low-intensity exercise training.

You’d be hard pressed to find a supplement that contains both trans-resveratrol and BioPerine®. In my capacity as an advisor to the supplement company ProHealth, I couldn’t find one, so my advice to them was to make their own, and they did; simply enough, it’s called 1000mg Trans Resveratrol.

As you’ve already learned, the trans-resveratrol improves the potential health benefits of regular resveratrol by making it more bioavailable, which is further enhanced by BioPerine®. ProHealth includes organic quercetin in the formula for its antioxidant and anti-inflammatory effects [24], organic red wine extract at 50% polyphenols to enhance the health benefits conferred by trans-resveratrol, and decaffeinated organic green tea extract with 30% polyphenols for its catechin content, which are antioxidants that fight and may even prevent cell damage, says WebMD.

All of these ingredients contained in ProHealth’s 1000mg Trans-Resveratrol are potent polyphenols. As Dr. Joseph Mercola emphasises, antioxidant-rich polyphenols play an important role in preventing and reducing the progression of diabetes, cancer, and neurodegenerative and cardiovascular diseases. They also may be a helpful prebiotic that increase the number of beneficial bacteria in your gut, important for health, weight management, and disease prevention.

Apparently, agreeing with Dr. Mercola is that aforementioned Harvard geneticist and anti-aging researcher David Sinclair, who famously combines 1,000 mgs of NMN powder and between 500 and 1,000 mgs of resveratrol into his yogurt each morning [25]. He has a good reason for that combination.

As I wrote in NPR’s Morning Edition: Can the NMN Molecule Make You Young Again?, NMN (nicotinamide mononucleotide):

NAD+ is the coenzyme that NMN boosts to the levels experienced when we’re young and that’s thought to confer various health benefits associated with youth. Part of how this is accomplished, it’s thought, is through NAD’s activation of those “longevity genes” called sirtuins.

As this study opined:

“A link of resveratrol effects to Sirtuins, besides other cellular targets.. is well documented…The Sirt1 [one of the sirtuins] activator resveratrol extends lifespan… and protects against diseases such as insulin resistance… In summary, our results reveal a mechanism enabling resveratrol-like compounds to directly activate Sirtuins.”

The upshot of this is that trans-resveratrol along with NMN supplementation may activate the very genes, sirtuins, that help keep us young.