Tom Hanks just told the world that he has type-2 diabetes. He just found out. Perhaps 60,000,000 Americans are pre-diabetic and don’t know about it. Could that be you? 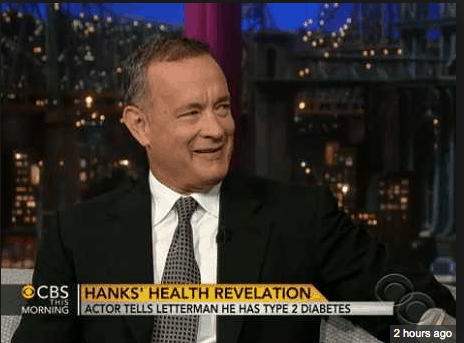 I JUST read on USA Today that Tom Hanks has adult-onset, or “type 2” diabetes. That surprised me, as he didn’t appear to have one typical attribute that we think of as a prerequisite — obesity.

When I read this news, I was surprised, but that feeling was trumped by empathy.

Hanks says that he’s been fighting high blood sugar since his thirties. I just discovered I may have the same issue, one that seems to have just recently appeared well into my fifties.

A bit more than a year ago at the urging of an older friend who jumps around like a teenager, I got some blood work done to assess my testosterone levels. As you may know, testosterone starts to go down as men age. My friend uses bio-identical, doctor-prescribed salve that keeps his testosterone in the range of a much younger, and might I add, more robust, man.

(My testosterone blood test results and what I’m doing to improve them can be read about here.)

Well, my testosterone numbers were lower than I want, but I was comforted that other markers of health, such as my cholesterol and blood sugar numbers were good.

A year later, a different story.

You’d think that during the year between blood tests I would be improving on all my blood numbers, because I’ve gradually been improving my diet by including frequent vegetable juice I prepare from my garden’s veggies, as well as my exercise routine.

But no, my blood test last August threw up some red flags (although my testosterone did improve), and one was blood sugar.

There are various blood sugar metrics, such as:

(Read about these here)

The one typically used as a first level indication of high blood sugar, or diabetes, is fasting glucose serum. The USA Today article I read did not report on what Tom Hank’s fasting blood sugar number is, but 100+ mg/dl is in the pre-diabetic danger zone.

Mine was 100 in the August test. I was dumbfounded, to say the least. The only mitigating factors were the second two metrics above listed, which for me were in the healthy range.

Tom Hanks wasn’t particularly fat and I’m certainly not, but both of us have high blood sugar numbers. If it can happen to us… well, you get the drift.

According to Dr. Mark Hyman, approximately 60 million Americans are pre-diabetic and don’t know it. That’s more than one-fifth the population.

“Why Controlling Glucose Is More Important Than Your Diet”, says Dr. Attia

“Reverse Prediabetes?” Two Scientist Show How To Do It (and one does)

Dr. Peter Attia – “How You Can Increase Healthspan”