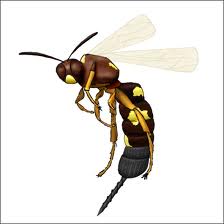 A story of wind and wasp.

Of Wind and Wasp

The wind crackles, bangs at the windows and makes the trees shiver. Stand behind a plane of glass, however, and you’ll get warm enough.

The wind be damned, I mounted my city cruiser and pedaled the one-mile distance to one of my favorite local café’s, Taste of Rome.  There, I settled into a cup of java and a book.

The rest of this story is about killing a bug.

I sat outside the café in an alcove protected from the wind. I was nearly finished with legendary investor Jim Roger’s book, A Gift to My Children

, when a wasp alighted upon the corner of a page I was about to turn.

I don’t particularly like or despise wasps.  I leave them alone if they give me the same consideration. But if one swarms around me, say, if I’m eating a tuna sandwich, and does not abide by my protestations, I have no compunction over killing it.

This one on Jim Roger’s book just stood there in the corner, unmoving.

I shook the book a bit. It didn’t move.

I brushed my hand over it in an attempt to scare it away.  It didn’t move.

I did not fear this wasp, but it made me uncomfortable.  I did want to turn the page.

After a couple of minutes, I curled my pointer finger behind my crooked thumb, aimed the about-to-be-launched finger at the wasp and “flicked” hard.

The wasp launched off the page with surprising velocity, but just as surprising, almost immediately, it furiously pumped its wings as its flight circled down into a helicopter crash to the sidewalk a few feet from my right foot.

There it lied compulsively moving its front legs repeatedly over its head as if to brush away the terrible bruise I gave it.

I immediately felt regret.  Obviously, this was a mighty blow to an insect. It mesmerized me as it continued to massage its head.

I looked away to glance at a toddler teetering by grasping an ice cream cone that was about to slip from his grasp; and when my gaze returned to the wasp, it was on its side, dead.

If you’re surprised at this reaction, let me tell you about it.

I have no idea what makes up a wasp. I have not the power to create one.  Though small in size, the complexity of this being is beyond anything I will ever fathom.  But just like a dull-minded boulder can bounce down a hill, hit and kill you, I killed this wasp that was doing nothing but inconveniencing me.

I could have watched that wasp when it was really close, standing on Jim Rogers’ book.  I could have marveled at it then, rather than after I had killed it.

I began to reach down for it to see if it was really dead.  Perhaps I could resuscitate it, I thought.

Just as I bent forward, someone turned the corner and took two steps, one of which was on the wasp.

There was now just a blank spot on the sidewalk where I was looking.

Steve Jobs to Murdock: Fox News ‘A Destructive Force In Our Society’