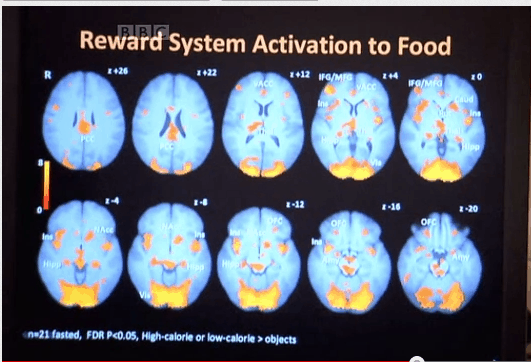 Episode 1 is a thorough and revealing BBC examination of what’s making people fat in the industries world. The focus here is sugar and it’s proxies. It’s a battle between lobbyists and everyone else. Here’s Episode 2.

This is your brain thinking about junk food

IN EPISODE 1, BBC correspondent Jacques Peretti travels to America to investigate the story of high-fructose corn syrup. Here’s a quick run down of some of what he discovers…

Sugar and it’s substitutes, like the pernicious high fructose corn syrup (“HFCS”), is in more foods than you’d imagine. Basically, if the food does not look like it would on the farm, chances are that it’s got something sugary in it.

Scientists think that HFCS does more than add empty calories to food — it actually triggers a disruption in leptin, which is the hormone that tells your brain that you’re full. When leptin is not functioning normally, you overeat.

If the scientists are right, the spike in the production and sale of sugar/HFCS-embedded in manufactured food precipitated the dramatic increase in obesity levels.

Furthermore, that sugar stuff is worse than fat in causing various chronic diseases, such as heart disease and obesity.

The food industry says that’s correlation; the scientists say that’s causality. As the video below shows, the industry has a history of getting it wrong.

Here’s Episodes 1 one on Youtube. Watch it soon before it’s taken down. If taken down, you can try going to Youtube and searching for “The Men Who Made Us Fat”, but know that this could get confusing because some versions separate what the BBC refers to as “Episodes” into 14+ minute “parts”. The video below is titled “(part 1)” but is actually Episode 1. (Whew!)

Tomorrow, I’ll post Episode 2 if it’s still available. (UPDATE: Here’s Episode 2.) Episode 3 has not been aired yet by the BBC, so there’s no version of it on Youtube.