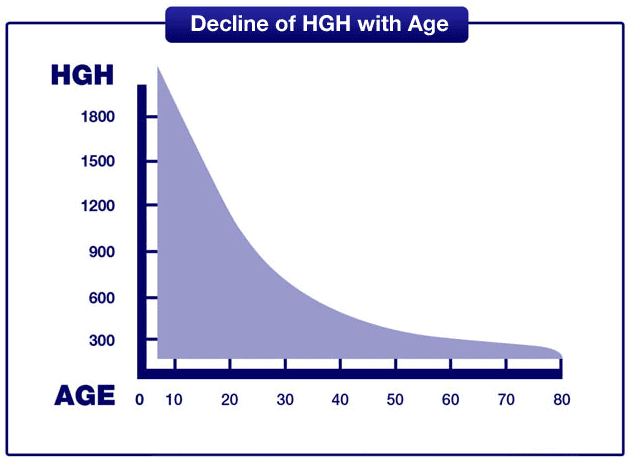 Watch Dr. Mercola and exercise physiologist Phil Campbell do a 20-minute exercise protocol that can stimulate your own production of HGH by 771%.  HGH levels and telomere length are indicators of life span and health. 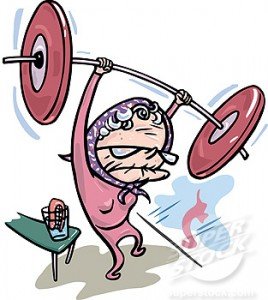 MY TITLE headline is compelling: How to Boost Your Human Growth Hormone in 20 Minutes! If I came across that title, it would certainly stimulate me to find out more about it, even as I wondered what the gimmick might be.

People are interested in Human Growth Hormone (“HGH”) because they’ve heard that it’s important for preserving youthful vigor, looks and strength.  HGH is on my radar because one of my main focuses in life is to live a long and strong life.

Attaining this without HGH would be an overwhelming challenge.

Just look at what happens to your body’s production of HGH over time: 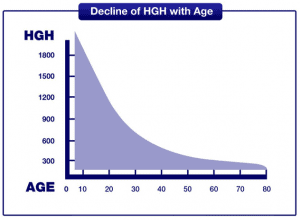 Even you twenty-somethings are at the halfway mark of HGH production.  At forty, you’re producing about half as much as at twenty, or about 3.5 times less than at your peak.  The rate of decline slows after forty, but the slope is still down.

Why Care About HGH?

There is debate about the value of stimulating the HGH levels of someone at the norm per the above chart.  WebMD has a succinct post, on the subject, which distills down to:

“It isn’t clear if human growth hormone may offer other benefits to healthy adults.”

The “other” in “other benefits” refers to an increase in muscle mass and a concurrent reduction in body fat; however, strangely, the increased muscle doesn’t seem to increase strength.

Could it be that strength wasn’t increased because WebMD’s review, like most evaluations of HGH, is based upon it being injected or introduced some other way into the human body?

That’s not what I’m writing about.

I’m reporting about stimulating more HGH naturally by your own body through doing a certain, precise type of exercise.

This is something I’ve been doing myself for about a month.

But before I get into the exercise bit and it’s effect on HGH production, a word from Dr. Mercola about HGH’s influence on health and longevity:

“If you’re over the age of 30, especially if you lead an increasingly sedentary lifestyle, you’ve likely entered a phase known as somatopause (age-related growth hormone deficiency). As your HGH levels decrease, your levels of insulin-like growth factor-1 (IGF-1) also decrease. This is another important part of what drives your body’s aging process.” The telomere story about its effect on longevity is deserving of it’s own post, or series of them, and, indeed I have written about them before and will continue to do so.

{See Three Months to Longer Life, How Exercise Slows the Aging Process and How to Live to 100.}

But I want to sneak telomeres in here because they too are favorably affected by the exercise protocol I’m about to divulge, which is what Dr. Mercola refers to as “Peak Performance”, and what exercise physiologist Phil Campbell calls “Sprint 8”.

Telomeres are found at the ends of chromosomes.  Their length foretell life span. They shorten as cells divide.  The shorter they are, the closer you are to meeting your maker.

Back to Dr. Mercola, who says:

Enter a Univeristy of Ohio study published in 2008, which maintains that the two interventions most consistently associated with increased lifespan in animal models are caloric restriction, and (as with HGH) the repression of the HGH/IGF-1/insulin axis:

“In humans as well as other species, a reduction in the GH/IGF-1 axis is correlated with increased percentage of total body and visceral fat, decreased muscle mass, decreased physical fitness, decreased immune function, and physiological declines in estrogen and androgen concentrations.”

“Thus, the natural declines in GH and IGF-1 that accompanies age-related degenerative processes implies that the GH/IGF-1 axis may be a causative determinant.”

So, what we have so far is the contention that HGH levels and Telomere length are both determinants of longevity and overall health, and that a certain type of exercise protocol can positively impact them.

Since Phil Campbell and Dr. Mercola have their own, different names for this exercise protocol that boosts HGH and telomere length, I’m going to pen one of my own:

Perhaps not poetic, but quite descriptive, my newly named BYB8 protocol (the same as “Peak Performance” and “Sprint 8”) has been tested to maximize the body’s own production of HGH.

This exercise protocol can boots HGH by 771% in just twenty minutes.

The name suggests the protocol, for to get the HGH boost you must bust your ass eight times.  And, indeed, the type of exercise you’re busting yourself over must involve your buttocks, one of our largest muscles.

1. The Exercise Type.  Choose an anaerobic exercise such as sprinting, running up stairs, running up a hill, biking, stationary biking, an elliptical exerciser or rowing machine.  (Note that any of these will, at least, engage your entire quadriceps, hamstrings and buttocks  — the big muscles in the body that you need to exhaust.)

As Phil Campbell puts it:

“There are many different ways you could do Sprint 8. As long as you can get totally exhausted in 30 seconds or less. That’s the key. If you can’t go longer than 30 seconds — no matter if you’re a professional athlete or just starting — that means you’re doing it correctly. It has to be so intense that after 30 seconds, you’re just praying for those last seconds to go by … “

2. Do 8 Sets, 30 Seconds Each.  After a warm-up, do the exercise as fast/hard as you can for 30 seconds.  Then slow way down (for instance, if you’re sprinting, walk) for 90 seconds and then leap to it again for 30 seconds, and so on eight times.

3. Ingest Protein. Within 30 minutes after the BYA8 session, ingest 20 to 30 grams of protein, either a protein drink (whey is good) or food.  You will accentuate HGH production and muscle-building if you cut carbohydrate ingestion now; in contrast, exercise recovery is accentuated if you do consume carbs.  Basically, it’s a trade-off, so do what supports your goal.

1. Ease Into It.  You will not be able to do 8 sets right away.  If you do, you’re probably not busting enough during the 30 seconds.  Particularly if you’re past 40 years of age or have been rather sedentary, begin slowly.  After warming up, try doing the 30 seconds at half power at first.  I’m doing four at full bust and four more slowly. Doing eight, even if just two sets are hard, is a good idea so that you’ll get accustomed to the protocol.

2. Rest.  Most of us will need at least two days of recovery.  For most of us, you will injure or exhaust yourself if you try to do BYA8 more often than every third day.

3. Eat Protein. You’ll need to eat more protein than usual to feed your muscles during the anabolic and growth phases post exercise; otherwise you won’t build enough muscle or recover sufficiently to keep the program going. (Anabolic recovery begins about 45 minutes after exercise, and the growth phase kicks in thereafter till the next catabolic, muscle break-down, creating workout.)

Now, before you get all “gun ho” about this, watch the video below.

You may also wish to read Dr Mercola’s views on HGH and exercise, a post he titled, Boosts Your Youth Hormone by 771% in Just 20 Minutes. There’s more juice on the subject there.

–> If you’re also going to use supplements, save time and money with this exceptionally comprehensive guide <–

Finally, as mentioned, I’ve jumped into and am busting my butt with this protocol. I’ll write about my experience once I have something definitive to report…

UPDATE 10/4/14: I’ve sprinted stairs now twice a week over the two years since this was originally posted. After four months, I injured myself by going too hard too soon, and not taking time off when I began to feel a twinge in my Achilles tendon. This caused a several month interruption, so what did I gain by not taking it slowly? Nada. I did get back to it, and reaping the benefits — leaner, stronger, more energetic. Read about this, but mostly about how supplements compare to HIIT when it comes to boosting HGH, in a post I just wrote called, HIIT It Hard for Your HGH Boost.

Let us know what you think of all this in the Comments below.  Are you interested a HIIT program?  If not, why do you hesitate?