Solar Storms Storming to Earth. How to Prepare. 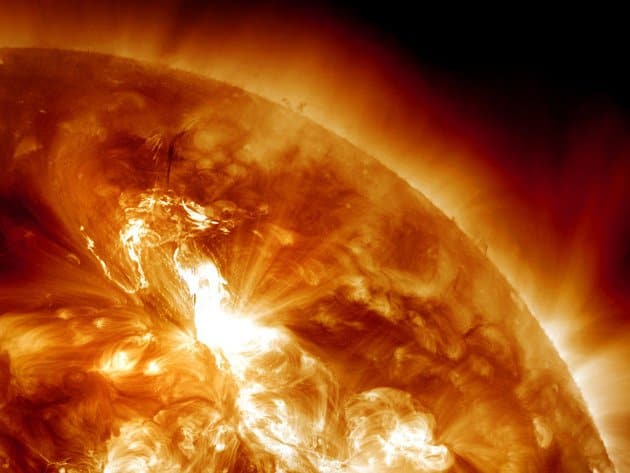 Solar storms are in the news again, and for good reason!  We’re at the top of a 100-year cycle for solar bursts, and our modern life would be in jeopardy if the solar storms became strong enough.  Here are the views of some scientists about solar storms that are coming, and what you can do to prepare. Watch.

[UPDATE. Here’s a list of resources to prepare for many calamities: How to Survive the Scary Future.]

HAVE YOU felt anything yet?

“A powerful solar eruption is expected to blast a stream of charged particles toward Earth” today, says NASA: “the strongest radiation storm since 2005 rages on the sun.” (More here.)

Scientists call these electromagnetic bursts “coronal mass ejections” (CMEs), or in common-person parlance, “solar storms”.  These charged particles that storm down upon Earth’s magnetic field lines are vigorously studied because of the systemic, life-threatening harm they could cause.

Basically, if the solar storm is strong enough, we’re talking the end of modern life, at least temporarily.  Everything that works via electronics/electricity – from power stations, refrigerators, cell phones, computers, the chips in your cars, the gas pumps that provide fuel for them, and the lights to see by, etc. – would be kaput.

How long could you be comfortable without these things? If the answer is, “not very”, then consider paying attention to the solar storm warnings that very credible scientists are making for 2012 and 2013, the potentially most devastating at this apex of a 100-year cycle.

“There is little doubt that the [solar storm] cloud is heading in the general direction of Earth,” Spaceweather.com announced in an alert. “A preliminary inspection of SOHO/STEREO imagery suggests that the CME will deliver a strong glancing blow to Earth’s magnetic field on Jan. 24-25 as it sails mostly north of our planet.”

Yes, perhaps a glancing blow right now – after all, your iPhone is still working, yes? – but this solar storm is expected to ramp up toward a near-term maximum peak in 2013.

Before I explore some protective measures, a solar storm survival guide, if you will, let’s watch physics Professor Michio Kaku give his admonition.

In the video below, Professor Kaku says that during 2012 and 2013, a 100 year cycle is expected to crest with its attendant dramatic solar flaring that could knock out satellites, power stations, all electronics, leaving the earth paralyzed.  The last such solar flare peak was in 1859 and was dramatically less impactful than a similar occurrence would be now given the lack of electronic-based power at that time.

OK, that was sobering, but let’s continue along this line…

Next up is a video of the sun’s massive “coronal hole”.  According to Wikipeida:

My basic interpretation: Coronal holes are where the sun’s magnetic field opens up and allows the solar wind to escape.  If you’ve opened the above link, “solar wind”,  you’ve read that a solar wind is:

“…a stream of charged particles ejected from the upper atmosphere of the Sun… These particles can escape the Sun’s gravity because of their high kinetic energy and the high temperature of the corona.

The solar wind creates the heliosphere, a vast bubble in the interstellar medium that surrounds the Solar System. Other phenomena include geomagnetic storms that can knock out power grids on Earth, the aurorae (northern and southern lights), and the plasma tails of comets that always point away from the Sun.”

My particular sensibilities suggest to me that the benefit/cost of doing some basic preparations is a rather large positive number; meaning, the benefits far outweigh the costs.

Whether you believe in solar storms or not, there’s enough natural and man-made disruptions potentially looming to do some basic preparations.  [Update: Like the Midwest tornadoes of early March, 2012]. Some extra long-lasting food in the pantry, potable water, wind-up radio and flashlights, LED lighting with ample battery supplies, camper stove with ample fuel, a family plan to seamlessly work through the solar flare-causing disruptions… these “investments” can pay huge dividends.

This next video provides some expert views of the impact of solar flaring and underscore the simple things to do to prepare for the potential impact of solar flares. (You’ll hafta watch it on Youtube, just click the arrow within the video for the link.)

Have you heard of a “Faraday Cage”?

A Faraday cage or Faraday shield is an enclosure formed by conducting material or by a mesh of such material. Such an enclosure blocks out external static and non-static electric fields.

Some people concerned about having their electronics destroyed by strong solar flares build these Faraday cages and store electronic devices in them.  There are even people who build a Faraday cage within their garages in order to protect their vehicles.

For other survival guidance for solar flares or any other systemic mishap, check out what I wrote during Japan’s earthquake and tsunami last March, 2011:

Japan Tsunami Creates Health Concerns… Are You Prepared? Clean water, food, medical supplies and shelter are among the top health concerns following a tsunami.  How would you fare if a tsunami or earthquake hit where you live?

Be Self-reliant – Be Prepared for Calamity Some resources to help bring you to self-reliance.

“10 Things to Learn from Japan” A Lesson for the World The calm, dignity, grace, order, self-sacrifice, ability, tenderness training, consciousness and media restraint so evident these past weeks in Japan as its people survive and rebuilt their society after the massive earthquake and tsunami presents a valuable lesson to the world.

And, as mentioned in the “Update” at the start of this post above, I highly encourage you to examine an extensive list of ideas for preparing for most any calamity as written by those who have done it. Find that info at How to Survive the Scary Future.

OK, so whether all this information alarms you or has you yawning (“Yeah, just another chicken little moment.”), couldn’t hurt to keep track of solar radiation storms and the like.  You can do that at spaceweather.com.

Do you think solar flares could be a significant enough problem that one should prepare for them? If so, please tells us in the Comments section below.