Juicing For Beginners. So Simple, A Child Could Do It. And Does

Three years ago, I introduced my young niece to juicing. She was both my videographer and taste tester.  Think I need to re-tune my juicing recipe for the youngins. Watch juicing for beginners.

IT HAPPENS every year.  Those resolutions.  And given our bulging girths, those resolutions tend to be peppered with some resolve about losing weight.  The result is that my blog posts about related topics light up with traffic.

About 18 months ago, I wrote a few posts about juicing, particularly about Joe Cross’s “Reboot Juice Cleanse”. They’ve been among the most popular posts on this blog.

This is particularly true with the dawning of the New Year. People hope to bring positive changes to their lives. Certainly, juicing is a great way to reboot your life, sorta speak, by kick starting a new diet and/or losing a few pounds.

Now, given that doing anything with a light heart makes that doing more doable, I hereby submit for your viewing pleasure a decidedly home made juicing for beginners video staring me and my nearly-six year old niece, Isabella.

She’s the videographer, so please excuse the absence of my head and some jittery video play.

Next up is the list of ingredients used in the juice made in the video above, along with suggested quantities of each for about two servings of ten ounces. This one of the recipes that I use for my almost-daily juice habit.

There’s some variation here, and many recipes and other info at the juicing reboot site.

This particular recipe is not for sweet-tooth’s, nor for those unaccustomed to foods or drinks with strong flavors. If you want to “lighten” it up, add less garlic and ginger and more carrot and apple.

I’m using the rock-solid Champion Juicer in the above video.

I also have a sleek looking Breville, the kind that Joe-the-Juicer (Joe Cross) uses.

You can read about the relative merits of these juicers, plus the Omega Juicer, in my post, A Kick-Ass Reboot Juice Habit For You!.

Whether you’re juicing for beginners or are an old pro, either juicer will do just fine.  The primary difference between them is that the Breville does the job faster, but the Champion is probably more bullet-proof.

Is rebooting your health via juicing worth doing? Well, this picture, as they say, is better than 1,000 words: 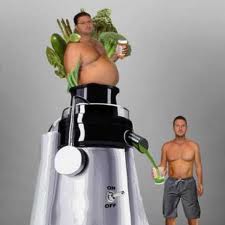 So, now that you see how simple and valuable juicing is, go for it. Experiment. Search for “cleansing” and “juicing” on this site, and get armed with more information.

Surely, a good way to start the New Year.