Short Home Workouts You Can Do Now With Surprising Results

You’re equipped for home workouts if you have a home and a body. Choose a 4, 7 or 10-minute workout, do it with intensity, and marvel at the surprising results. Watch the videos. 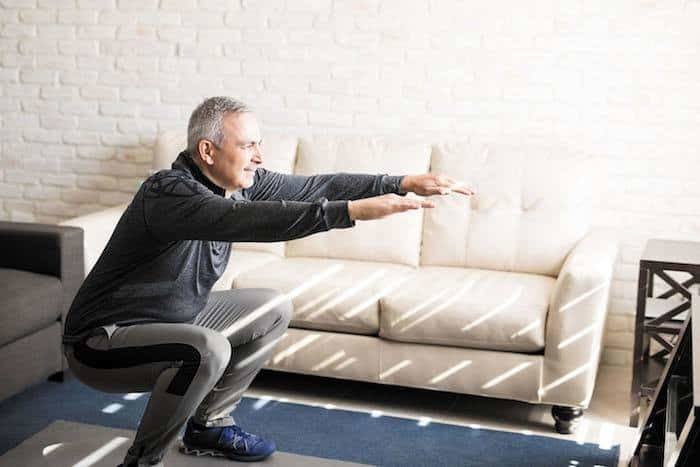 You have three home workouts from which to choose of varying duration:

Of course, you can do more than one round of each, or combine them, if you have the energy, because even though these home workouts are short in duration, their intense if properly done.

The aim is to have an exercise suitable for everybody. You decide what type of home workouts  you’re willing to do, and their duration. To help ensure that you do them on a regular basis — and make it fun — enlist a buddy to join you, either someone in your home, or via a video sharing app, such as Xoom, FaceTime or WhatsApp video.

Go climb a mountain (I did)

Focus On Your Heart Rate

As you’ll soon see, these home-based workouts require an effort that’s measured by heart rate. We’re looking to go well beyond the aerobic threshold, typically guided by the ability to talk while performing the exercise. That’s not possible during an anaerobic routine, where our focus is on getting your heart rate as high as 90% of maximum capacity.

How can you tell what’s 90% of your maximum heart rate?

Use this chart guide you:

If you’re over 70 years of age, use this formula: 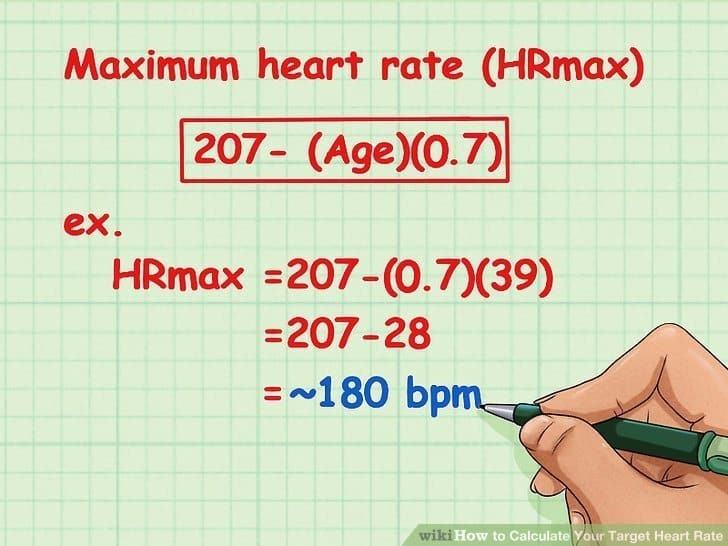 If you don’t have a way to monitor your heart rate, such as with a chest band or watch, to ascertain how fast 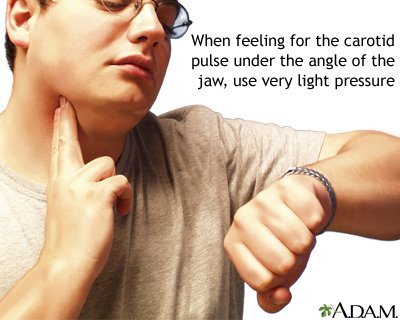 your heart is beating:

This can be awkward to do while your doing a near-all-out sprint of some kind (especially if you’re jumping rope). My recommendation is that you get a sense for what 90% (or whatever your target) is of your maximum heart rate by counting your pulse a few times and then rely on that body awareness.

HIIT It Hard for Your Home Workouts

HIIT refers to High-intensity interval training. It’s become popular because short bursts of strenuous exercise can have a big, positive impact on the body. HIIT concentrates the heart, lungs and metabolism benefits of, say, a 20-minute jog into a few minutes.

So, yes, you can save a lot of time with HIIT exercises, but there is a price — it’s grueling, if you do it right. Here’s how you know if you’re doing HIIT properly: 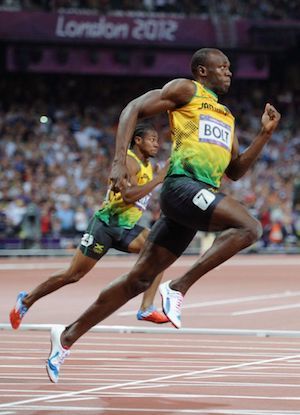 Usain Bolt holds the world record for the 100 meter sprint.

That last point is worth underscoring, especially as you get older and become more injury prone and take longer to recover:

You may apply HIIT to many of the aerobic activity you like, such as running (but remember my words of caution), biking, stair climbing, swimming, jumping rope and/or rowing.

According to exercise physiologist Dr. Phil Campbell, the most effective HIIT regimen is:

I’ve experimented with HIIT done both on stairs and stationary bike for about six years now, and I still can not go all out for eight rounds (sets) of 30 seconds. For the first month or so I began doing HIIT, my 30 second effort was between 50 and 70%. Once I got used to it, I went all out, but could only do that for about five sets: the first two built up to the full-out effort of the third, and the last (number 8) is often more of a whimpering session than a strong set. Take your time to condition yourself to this.

Less can be more if you perform your exercise anaerobically and consistently. By definition, an anaerobic exercise is activity in which the body incurs an oxygen debt. You experience this as huffing and puffing. When that happens while exercising, say between 30 seconds and a few minutes, the exercise is anaerobic and has taxed some large muscles, such as your legs and/or the chest and back.

Norwegian scientists have studied the effects of intense intervals lasting for four minutes, performed at about 90% of each volunteer’s maximum heart rate and repeated four times, with a three-minute rest between each interval, bringing the total time of exercise to 16 minutes. The researchers found that high-intensity aerobic interval training resulted in significantly increased VO2max compared with long slow distance and lactate-threshold training intensities.

The Norwegians did another study that compared the results of four minutes done four times in one exercise session described above to just one four minute session performed at 90% of maximum heart rate three times a week for 10 weeks.  Remarkably, the exercisers improved their endurance, blood sugar control and blood pressure as much as a comparable group of men who did a series of all-out exercise lasting for 16 minutes.

Least you get all giddy thinking that you only need to putz around for four minutes to achieve these results, let me disabuse you of that notion. Those four minutes are very, very hard. If you’re not used to sprinting or doing HIIT, you need to build up to such an effort. Certainly, it’s counterproductive to enthusiastically push too hard and wind up injuring yourself.

Depending on your conditioning, walk, jog or sprint up stairs, use a bike or jump rope. Do it for four minutes. Extra credit: After a three minute rest, do it again.

7 Minutes for the Fat Burn 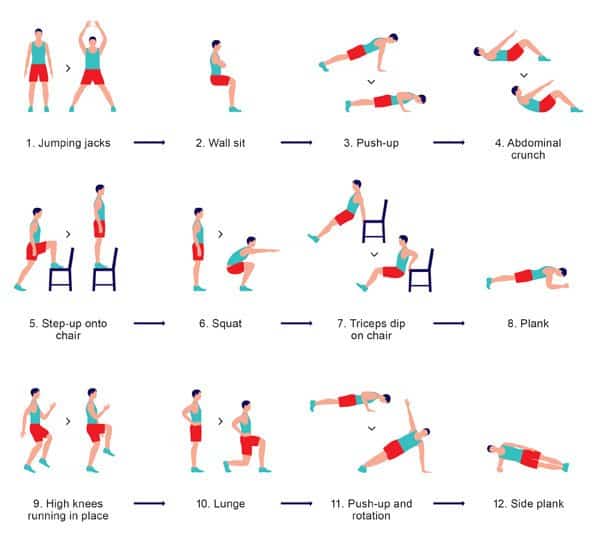 Seven minutes is all you may need to get fit if you use a specific sequence of exercises in a certain way.

An article in the May-June issue of the American College of Sports Medicine’s Health & Fitness Journal shows that 12 exercises deploying only body weight, a chair and a wall fulfills the latest mandates for high-intensity effort, which distills down to seven minutes of steady discomfort.

This seven minute exercise sequence, is referred to as “High Intensity Training Circuit” (HITC), which you perform each exercise in rapid succession, allowing 30 seconds for each. Your intensity level should hover at around an eight on a discomfort scale of 1 to 10, says the creator of this exercise routine, Chris Jordan, the director of exercise physiology at the Human Performance Institute in Orlando, Fla.

Some proven benefits of HITC training:

(Go here to see the studies backing these claims.)

Click here for a video of one man's 7-minute experience

Something for the back

You might have noticed that there’s no exercise for your upper body pulling muscles that workout your back, lats and biceps. Since this is a at-home exercise routine and you might not have a pull-up bar, consider incorporating one of these into your seven-minute routine: 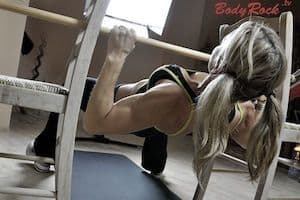 This workout option might be good for you if you like to run, bike, row or swim.

Typically, you might have done any of these exercises for their aerobic effect, rather than increasing the intensity, but reducing the time to achieve an anaerobic effect. (Read about the difference.) But now, it focus is intensity over a short duration — one minute.

In one study, overweight, sedentary volunteers completed this 10-minute workout three times a week — for a total of 30 minutes of exercise weekly. After six weeks, the volunteers had improved their endurance by 12%.

In this exercise regimen, there’s a total of one minute of intense exercise scattered within a 10-minute duration.

Do it in seven steps:

Try this routine three times a week, for a total of 30 minutes of weekly exercise.

Do You Have Resistance Bands?

So far, we’ve been examining home workouts using equipment you probably already have, such as your body, a set of stairs, or jump rope. But if you have exercise bands, or are willing to purchase some, you can expand the type of exercises you can do right at home.

In this we’re guided by a video done by Coop from Garage Gym Reviews:

Do You Have A Mountain Nearby?

About five years ago, I plodded behind my good friend and Swiss mountaineer, Anatole, as we hiked up a section of Mt. Rainier in Washington state.

While this isn’t among a list of home workouts, per se, if you’ve got a big hill or mountain nearby, go hike up it. You can go slow and steady to gain some aerobic conditioning, or do fast anaerobic spurts.  As you’ll see in the video, it was all I could do to simply slowly put one foot in front of another to keep up with Anatole.

Remember this one thing:

Choose a workout and do it regularly with someone who will hold you accountable.