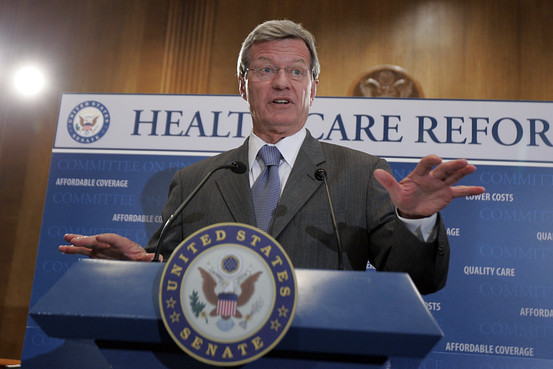 LORD KNOWS how it’s going to look when made into law, but one version of America’s health care system overhaul took an unprecedented step forward today when the Senate Finance Committee approved a $829 billion health-care measure that would extend health insurance coverage to an estimated 29 million people.

It’s taken a long time to get this far. Sixty-four long years ago, President Harry Truman stood before a joint session of Congress and implored that body “to assure the right to adequate medical care and protection from the economic fears of sickness.”

Today, 14 of 23 members of the Senate Finance Committee must have bent to the will of President Truman’s ghost, as 13 Democrats and one lone Republican, Olympia Snowe of Maine, voted to advance this particular health bill — one of two in the Senate and three in the House — to the general Senate body for a vote.

The other bill in the Senate has not yet advanced through its committee, and it will unlikely get any Republican support because it has a public option.  Republicans emphasize market-based competitive incentives to reform health care.

The House has three bills being exercised in their respective committees.  At some point they will all be voted upon in their respective chambers — House and Senate — and the finalists will then be merged in some compromised fashion for a final vote, whereupon it then gets sent to President Obama for a nay or yea.

Throughout this process, many liberals have excoriated the Democrat managers of this process for spending so much time and energy cultivating Senator Snowe’s acquiesce so that the Senate could get 60 votes (a filibuster buster) for the bill once the entire Senate votes on it.  The argument liberals make is that Snowe represents one-half of one percent of the total country and should not be the deal-maker, particularly since a better bill (from their perspective) could get 51 votes.

Snowe has said that she would oppose the bill if a public health insurance option is added; however, she has proposed adding a provision to the bill that would create state-based public plans if private insurers didn’t provide affordable insurance to enough people in a given state. I wonder how that would be measured.

In any event, this particular Senate bill’s price tag is estimated by the Congressional Budget Office to be $829 billion over ten years in keeping with the White House’s pledge to hold the cost of health care legislation under $900 billion. Six percent of the U.S. population though will remain uninsured — that’s 25 million people, excluding illegal immigrants, according to the Congressional Budget Office (“CBO”).

The expectation is that the bill be paid for by various cost-cutting measures, including $130 billion in new fees on various medical sectors, and an excise tax on high-cost insurance plans that would generate $201 billion in revenue.

There’s a long way to go before some final version is signed into law.  The sparks will be flying in both houses of Congress as these five bills wind there way through the process, including CBO cost estimates, until there’s enough consensus to be placed on President Obama’s desk.

In the end, I hope consensus doesn’t lead to nonsense.

[Thanks to Patrick Yoest, Dow Jones Newswires, for much of the data used in this post. His article is here.]
Share. Someone you know will be thankful.