There are a 1,000 things you can do to improve your longevity and live strong, but here we’ll focus on just three brought to you by Dan Buettner of “Blue Zones” fame.  He has a new book out to guide you along the way.  Read on… 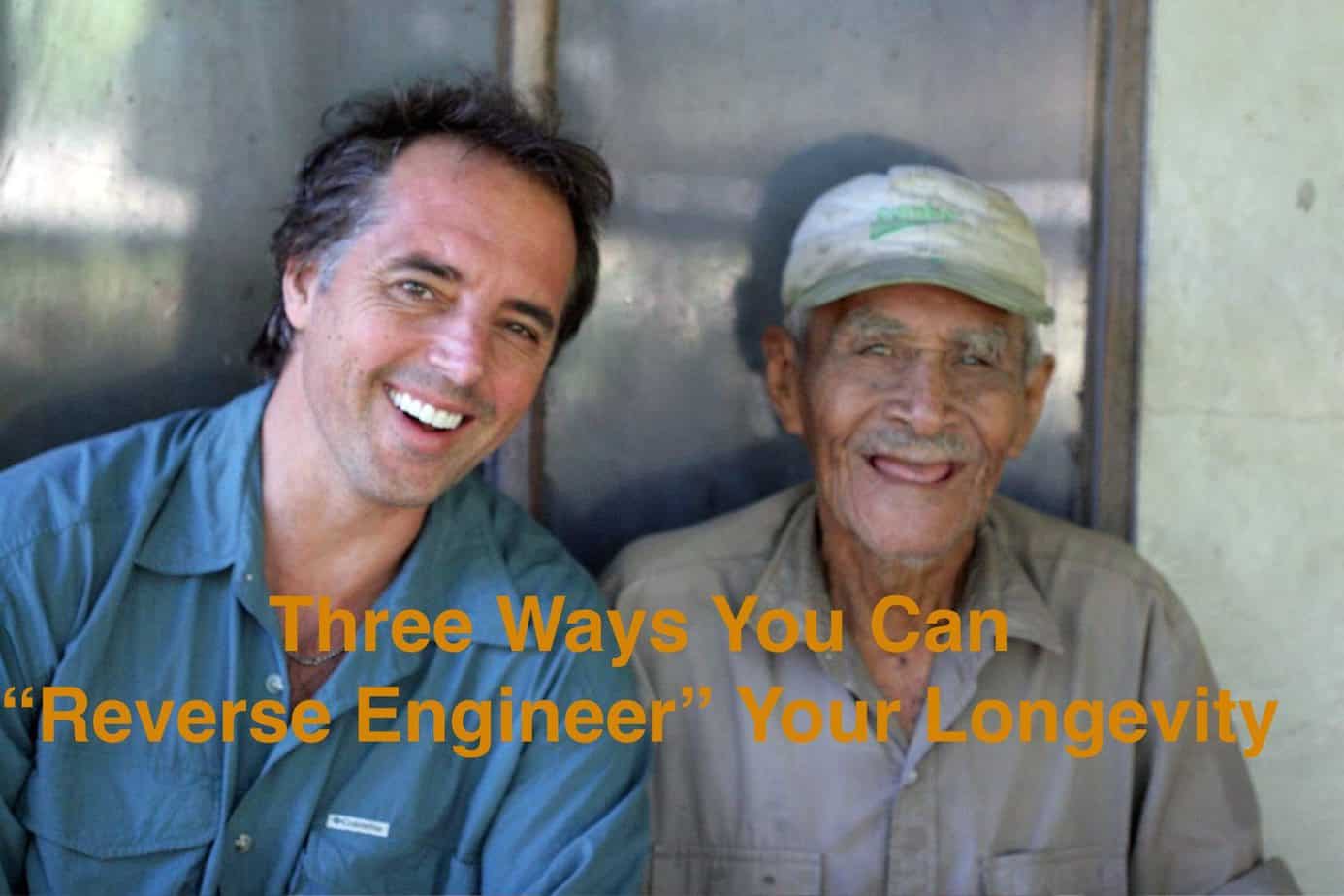 Dan Buettner is a guy whose claim to fame is traveling around the world to seek out the healthiest, most long-lived peoples of this great wide world.

I’ve written about Dan and his findings before.

In 5 Simple Things to Live Longer, Better, I summarize an interview that CNN’s medical correspondent Sanjay Gupta had with Dan about the habits people in the “Blue Zones” share. Want 10 Extra Years? It’s Easier than You Think! shows a video of some very old people working away as if they’re not.

This article looks at the longevity of those in the Blue Zones from a bit of a different angle — how one’s environment supports lifestyle choices that are known to help you live a long and strong life.

The idea is to learn from those who live a long and healthy life, pretty much free of all those chronic diseases that so significantly impair the enjoyment of life in our “golden years”.  What we want to do is to reverse engineer longevity the Blue Zones way.

What follows are excerpts, along with my commentary, of Lynne Rossetto Kasper’s recent interview with Dan Buettner. Lynne is an American food writer and radio journalist, and the host of the American Public Media program, The Splendid Table.

Let’s begin by defining “Blue Zones”, then we’ll get into the characteristics the long-lived people who live in them share, and finally see how we might, in effect, “reverse engineer longevity” for our very own selves.

What are Blue Zones?

“Blue Zones” is a term that describes various places in the world where inhabitants tend to live demonstrably longer than most of us humans. These places have the highest rates of centenarians, and/or the highest life expectancy.

The Zones were discovered by Dan in his ten year collaboration with National Geographic. Although not explicit, the objective of the project was to kinda reverse engineer longevity.

Dan and National Geographic thought this was a great opportunity to learn the lessons of what these long-lived, healthy people are doing in the Blue Zones and apply them to our lives wherever we live.

These are the five Blue Zones:

If you’ve ambled around this website, you may have noted a graph that typically is referred to as “Rectangularizing the Age Curve”, or my preference: “Bend Your Age Curve”. 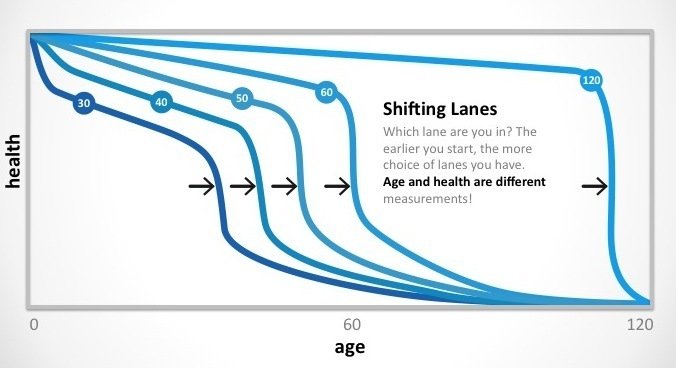 Note that in the graph it says, “Age and health are different”, and you see those arrows “pushing” the various curves further out until the last curve approximates a rectangle.  That’s the place where you’re healthy nearly till the day you meet your maker.

No drooling on yourself slumped over in a wheel chair in front of a blaring TV! Rather, today you’re hoeing the garden, and tomorrow you’re gone.  That, typically, is what the Blue Zone folk tend to do.

Live longer through your mouth

Throughout Dan’s investigation of the Zones, he say one obvious common denominator between the inhabitants is that their health starts at their mouths, or rather, what they put in it.

Working with the University of Minnesota, his team distilled down 155 dietary surveys in all five Blue Zones, which they then shaped into guidelines. You’ll have to read his new book, The Blue Zones Solution, to get the details, but the interview with Lynne Rossetto Kasper gives us a few examples, such as:

Carbs are good. Contrary to the dictates of the very popular Paleo Diet, these long-lived people eat a very high-carb diet, about 65% of total calories, mostly grains; for instance, oatmeal for breakfast, for example. The Okinawans ate mostly sweet potatoes.

[OK, but remember that these people are active — so there’s something for those carbs to fuel — and the quality of the carbohydrates are high… no quick-cook, low glycemic stuff.]
Beans rule. The cornerstone of every longevity diet in the world is beans, says Dan, and argues that they’re the best longevity supplement in the world. Ounce for ounce, they have more protein than beef at one-fifth the cost. About one cup of beans a day should suffice.
[I’ll make all the Paleo people slightly less squirmy by suggesting that you soak the beans overnight, even let them sprout a tiny bit, before you cook them. Doing this will substantially reduce the lectins and phytic acid in the beans, which seems to be the primary reasons that people who eat Paleo avoid beans (and lentils).]

Create the right environment for a healthy long life

As I glean it, by “environment”, Dan Buettner is basically referring to three things:

Dan and his team have been consulting with various cities to improve their food policy. For instance, in Alberta Lea, Minnesota, they worked with restaurants and grocery stores to make the food they offer to the community 10 to 20% healthier. It took about a year-and-a-half to lower their health care costs by a whopping 40% — just by a small improvement in the quality of the food!

We usually get about 50 percent of the restaurants, about 20 percent of the large workplaces and the big grocery chains involved. Then we get somewhere between 15 and 20 percent of individuals taking a Blue Zone pledge. It’s a critical mass. We see drops in obesity by as much as 15 percent in some of our cities. Our big win in the Los Angeles beach cities was dropping the smoking rate by 30 percent, which will save tens of millions of dollars.

Now, they’re in 23 cities in Iowa, and I look forward to hearing about the impact that will happen there.

In the Blue Zones, many interactions with food and one another naturally evolved from peoples’ cultures — what they ate, but also a sense of community among them. They have close friendships that last a lifetime, interact with them almost daily, all within the context of a “sense of purpose”.

How do you superimpose that on your culture?

Changing the quality of the food offered locally requires the community to come together, spearheaded by the political leadership.

Dan’s team only works with cities that invite them. Their city manager, head of public health, superintendent of schools and the CEOs of any local companies must all give a pledge.

They show the city leaders 40 evidence-based policies that create a healthier food environment from which they choice what will work for their community.

If you’re fortunate enough to live in a community guided by Dan Buettner, you’ve got access to healthy food and the support of your community leaders.  But if everyone around you — your friends — are into bad habits, your road to a long and healthy life is seriously compromised.

If your best friends are obese and unhealthy, there’s about 150% better chance that you’ll be overweight yourself, says Dan.  To combat this unhappy factoid, he borrows an idea from Okinawa referred to as “moais”.

Moais are clusters of people numbering five in each cluster. Each person commits to either walking together or eating a plant-based potluck dinners together for 10 weeks.

In Albert Lea, Minnesota about 60% of the moais stay together. What extends from this is a permanent social network that supports healthy eating and exercise.

I refer to this as the “buddy system”, and often preach that for all but the disciplined and super-motivated, that it’s essential for making long-term changes in your life.

What to change your lifestyle?  Recruit a friend, two is better. Make a pact that defines what you’ll do together and when.  Write down the goals and milestones. (Here’s how to do it). And then go have a lot of fun.

Being socially connected with people who care about you and vice versa is a big part of the longevity formula — which I detail in A More Youthful Body Thru Progression, Tiny Habits and A Buddy – so whenever you commit yourself to a big change, take the journey with a friend or two.

After all, who likes to travel alone?

Dan Buettner’s new book is called, The Blue Zones Solution: Eating and Living Like the World’s Healthiest People.  As of right now, it has a 4.5 star rating from 74 customers on Amazon.com, from which I took this description:

“Dan Buettner, the New York Times bestselling author of The Blue Zones, lays out a proven plan to maximize your health based on the practices of the world’s healthiest people. For the first time, Buettner reveals how to transform your health using smart eating and lifestyle habits gleaned from new research on the diets, eating habits, and lifestyle practices of the communities he’s identified as “Blue Zones”—those places with the world’s longest-lived, and thus healthiest, people.

“With this book’s audacious belief that the lifestyles of the world’s Blue Zones could be adapted and replicated in towns across North America, you’ll be inspired by the specific stories of the people, foods, and routines of our healthy elders; understand the role community, family, and naturally healthy habits can play to improve our diet and health; and learn the exact foods—including the 50 superfoods of longevity and dozens of recipes adapted for Western tastes and markets—that offer delicious ways to eat your way to optimum health.

“Filled with moving personal stories, delicious recipes, checklists, and useful tips that will transform any home into a miniature blue zone, The Blue Zones Solution is the ultimate blueprint for a healthy, happy life.”

Grab two friends and together commit to helping each other make some fundamental lifestyle changes now, so that later in life you can live like a Blue Zoner.