Yes, the simple push-up has been shown to reduce your heart disease risk. Statistically, you have a greater chance of dying from heart disease than anything else. Here’s how to choose the right push-up for you. 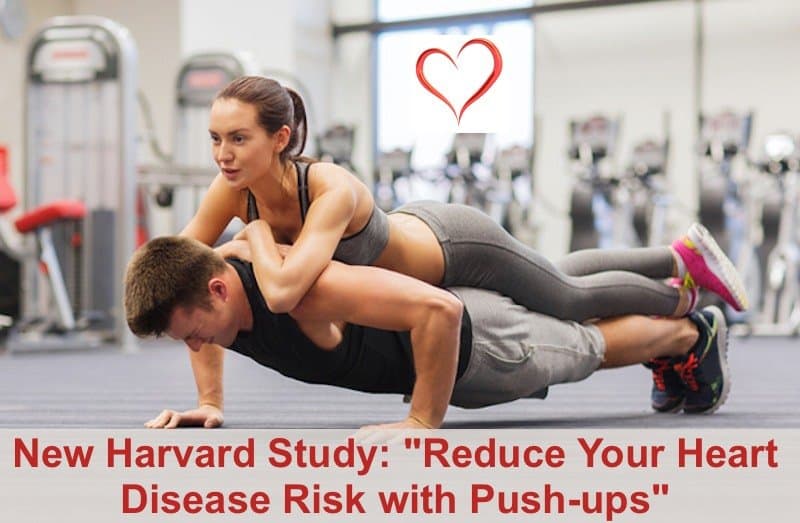 GIVEN THAT heart disease is the number 1 killer of people worldwide, wouldn’t it be mighty fine if you had a very simple way to assess and then reduce your heart disease risk?

Good news — you can!

What am I talking about?

Now please don’t get turned off if the only push-up you’ve ever done is to push yourself away from the dining table. This one simple movement could be a life safer, and in a bit I’m going to show you how to make them not-so-hard through a progressive exercise selection that you can do.

There’s not many things more important than to reduce your heart disease risk.

Push-ups and Your Heart Disease Risk

Your heart disease risk seems to negatively correlate with the number of push-ups you can do; meaning, more push-ups results in less heart disease.

That’s the findings of a Harvard University study published in Jama on February 15, 2019. It showed that middle-aged men who can’t complete 10 push-ups are at much higher risk of heart attacks or strokes. Being able to do 11 or more is the sweet spot:

The risk of heart disease continues to lessen as your capacity for push-up reps increases.

The study found that being able to complete between 21 and 30 push-ups meant men had around a quarter of the risk of getting coronary artery disease or heart failure compared to those not able to do 10 push-ups.

Being able to do more than 40 push-ups was associated with a 97% reduction in risk of cardiovascular disease over the next 10 years, the researchers said.

So, to sum up the heart disease/push-up study:
The study was done on 1,104 occupationally active adult men, firemen. They were stratified into five groups based on number of push-ups completed and were followed up for ten years. Final statistical analyses were completed on August 11, 2018.
The men had an average age of 39.6 years, but this ranged from 21 to 66 years old. While the group had an average body-mass index (BMI) of 28.7 – in the overweight range – they were all active. Even adjusting for the different ages and weights of participants, there was a clear link between number of push-up repetitions done in one set and longer-term health.

Surprisingly, push-ups are a better predictor of future heart health than established fitness benchmarks like running, and were simple to complete, making them ideal for short periods of exercise.

This is the first study to show push-ups can be an effective test for future cardiovascular disease risk, but it would be helpful if its findings were proven in other groups, including women.

Is Heart Disease Different for Women

According to the research compiled by Everyday Health, there are at least eight ways heart disease is different in women than men:

That’s useful information for women, because any one of those eight might reduce your heart disease risk. But do push-ups reduce the risk of heart disease for women as it does for men?

Not sure; hasn’t been tested. But why wouldn’t they?

A systematic analysis of Epidemiological studies was published in Jama in 2009 that indicated an inverse association between cardiorespiratory fitness and coronary heart disease or all-cause mortality in both men and women. This means that men and women who do cardio training have less heart disease.

Why would it be different for push-ups?

So, women, do some push-ups.

Next up is how to do them to reduce your heart disease risk.

So, how many push-ups can you do?

Many of my male friends, including those who were former athletes, can’t do ten proper push-ups. My female friends say something like, “Can’t I get stronger just by watching you do them?”.

The following images show you a progression ranging from assisted push-ups to regular push-ups and beyond.

Beginners who can’t do more than five “regular” push-ups

If you can’t do more than five regular push-ups, cut the load. The “load” is your body weight. In this case, the lower your feet are relative to your chest, the less load your chest, shoulders and triceps have to push.

Choose to begin with wall push-ups or knee push-ups based on how many you can do now. You want to be able to do at least ten reps of three sets with whichever push-up version you choose.

Not so fast, grasshopper

Still moving too fast, unless just warming up.

You can increase the load a bit by curling your heels to your glutes.

As you get stronger you can increase the difficulty of an exercise like push-ups by:

Elbow Alignment: Keep them at a 45 degree angle from your body. Figure that by first touching your elbows to your side once you’re in push-up position, and then flaring them out half way between against your body and perpendicular to it (completely flared out).


Intermediates who can do at least five push-ups

If you can do at least five push-ups in proper form, do them as shown below. Be able to do 19 reps before you move on to advanced push-ups. To get more reps, put your knees on the floor…

I used to be built like him. Then I woke up.

When should you do your push-ups?

It depends on you.

A. If you can consistently program push-ups into your exercise schedule or begin one that has you doing a series push-up sets, at least three sets to start, at least three times per week, then do that.

B. If you can’t do option A, then do your push-ups all throughout the day. Mini exercise sessions add up to real strength and muscle gains. Set your smart phone to chime every hour, and when it does get up and do one set of your push-ups. Shoot for five sessions/sets per day. Because you’re not overloading the muscles involved all at once as you would in option A, you can do this program on consecutive days.

To reduce your heart disease risk, remember these four things: