Find Out Your Real Age!
0 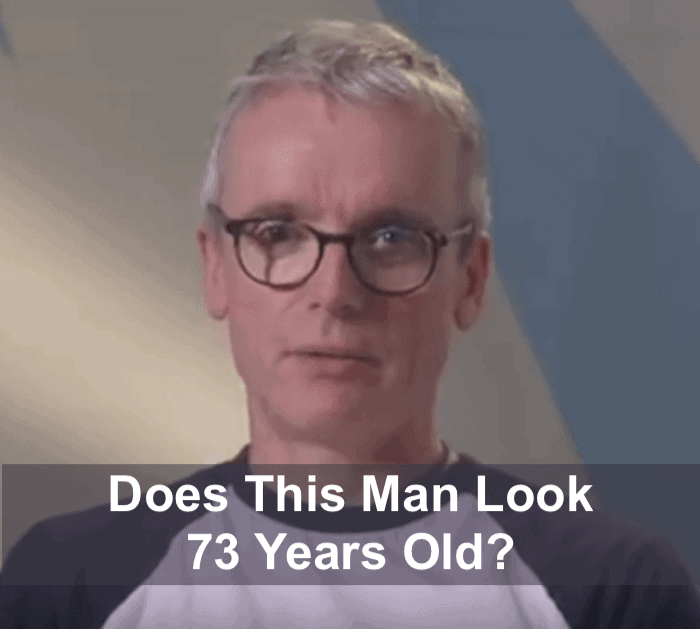 For most of us, our body age is different from our chronological age. Yes, you might have been born 50 years ago, but it’s likely that your body age — the age that your body “thinks” it is, is either higher or lower. This is a story about how three people substantially reduced their body age in just three months.

AS I was strolling around Youtube, I encountered a TV series produced by the BBC called, How To Stay Young. Certainly, that’s a point of interest, so I jumped in and have now emerged with something worthy to share with you about your body age.

I’m going to show you videos chronicling the anti-aging journey three people took after learning that the ages of their bodies were substantially older than their chronological years.

There are many factors that cause aging, but the BBC doctors focused on what was most pronounced in the volunteers they studied, which as you’ll soon see distilled down to:

No brainer, you say?

Perhaps, but you’ll be shocked at how quickly your body ages when you’re not consistently making healthy lifestyle choices.

Our story moderators are Angela Rippon and Dr Chris van Tulleken, who team up with scientists to see what can be done to reverse the aging process of three volunteers in only three months.

The trio of volunteers are put through a variety of tests and placed on a lifestyle plan to turn back the clock on aging, but will it work? Can they reverse their body age?

At this point, you know they did. Cumulatively, these three people reduced their body age by 29 years. In only three months!

Read on and watch:

By the way, although those ages cited above accurately show their chronological age, their bodies tell a much different and frightening story.

If you have ever worried about aging or wanted to turn the clock back, then you’ll want to carry on…

He looks pretty young for 51 and appears lean, but clocking in at a body age of 73, clearly a lot is going on beneath the surface that indicates something is aging Patrick fast.

* According to the Life Extension Foundation, 115/75 is an ideal blood pressure to shoot for.

Plugging in moles into a cholesterol converter to get the unit measurement American’s are most familiar with converts Patrick’s 6.3 mmol/L (millimole per liter) to 244 and 5.1 to 197 mg/dL (milligram per deciliter)

Patrick’s sugar and fat intake are off the chart. His high total cholesterol and blood pressure doesn’t help matters. All this happened due to his penchant for junk food.

Imaging Patrick’s carotid arteries show they’re thicker than they should be for someone his age. Furthermore, formations of plaque are beginning that will accumulate and potentially cause future health problems.

Patrick’s lifestyle choices results in a body that’s tested to be 73 years old, 22 years older than his chronological age of 51.

This 3:16 minute clip introduces you to Patrick and his body age assessment:

A nutrition Professor assigned him tells Patrick that the cause of his aging issue stems from salt, sugar and fat. He needs to find substitutes, she tells him, and they are:

* Although not the most abundantly endowed anti-oxidant food, oats do contain them. But to focus on anti-oxidants is to resist abandoning old and debunked science. As I reported in, If The “Free Radical Theory of Aging Is Dead”, Should You Take Antioxidants?:

The free radicals that our cells produce while making energy are not only not harmful, but can even slow the body’s aging down.

In addition to the diet changes, Patrick was advised to do 40 minutes of vigorous exercise thrice per week, which could cut his cholesterol by 10% over the three-month period (although the right diet packs a bigger punch).

Patrick’s new lifestyle choices brought down his body age from 73 to 64 in just three months.

Jenifer had to have all her “lady parts” removed due to ovarian cancer, from which she is in remission.

Her biggest problem is inadequate sleep.

Ongoing, insufficient sleeping can increase body weight and stress and is an independent predictor of cancer, type 2 diabetes and heart disease.

*According to the Diet Database, this chart shows ideal body fat percentages:

Jenifer’s chronically insufficient hours of restful sleep along with the excess fat in her arteries, muscles and organs puts her at risk for premature aging.

This 3:01 minute clip introduces you to Jenifer and her body age assessment:

Bed has to be reserved for sleeping. No more reading or watching TV in bed. Her brain needs to become conditioned that bed is for sleeping and no other activity than that (and perhaps one other.)

To condition her for sleeping, her doctors put Jenifer on a “sleep restriction” regimen. In her case, she was to go to bed from 1:00 AM to 6:00 AM.  Yes, that’s not eight hours, but the ideas is to first get her body sleepy enough to want to sleep once in bed. Spending less time in bed could help insomniacs sleep better in the long run.Once that’s done, the idea is to extend the hours of sleep time. Exercise was also added to her daily schedule.

Jenifer’s new lifestyle choices brought down her body age from 71 to 57 in just three months.

In Harminder’s case, her paramount issue was stress. Yes, she’s overweight and gets nearly no exercise, but she experiences a lot of stress in her life that she doesn’t deal with appropriately; this is the single greatest issue behind her accelerated aging.

Chronic stress can age you in many ways, as it has a cascade effect on hormones, immunity, fatigue and even your DNA. (Read my article, How Depression and Stress Make Us Age Faster.)

Stress can be identified via blood markers testing for C-Reactive Protein (CRP) and Erythrocyte Sedimentation Rate (ESR). These inflammation indicators need to be brought down or they will accelerate aging.

Forest Tennant, MD, DrPH points out that while both are biomarkers for inflammation, ESR and CRP should be interpreted differently. Due to this basic physiologic difference, CRP is a more sensitive and accurate reflection of the acute phase of inflammation than is the ESR. The half-life of CRP is constant, so an elevated level is mainly determined by the rate of production and, hence, the severity of the precipitating cause.

In the first 24 hours of a disease process, the ESR may be normal and CRP raised. The CRP will return to normal, within a day or so, if the focus of inflammation is eliminated. The ESR will remain raised for several days until excess fibrinogen is removed from the serum.

Here’s a chart showing the differences between ESR and CRP. (source)

The Mayo Clinic says the normal range is between 0-22 mm/hr for men and 0-29 mm/hr for women, but these ranges vary.

Although you can’t see it clearly, the image below showing Harminder’s biometrics for anxiety and stress are quite high (orange and red):

Anxiety and stress is much too high

Importantly, Harminder not only gets stressed easily, she remains there too long:

I didn’t find a clip showing Herminder’s test assessment, as presented for Patrick and Jenifer, but you can see it in the first video above beginning at 21:30.

Physical fitness can beat stress, given that it reduces the level of stress hormones (like cortisol) and increases endorphins.

Problem for Harminder — she doesn’t like to exercise and struggled to keep up her exercise regimen throughout the three-month period.

What did work for her was a mindfulness practice.

She learned to meditate and became attuned to her stress levels — what caused and abated them — via a mindfulness practice.

Harminder’s mediation focused her on physical sensations and not mental worries. In only five weeks, an EEG test measured positive changes in her brain. In one test, her responses to negative and positive images were recorded, and indicated that her mindfulness practice was able to make her substantially less reactive to negative impressions, and thereby cause less stress in her body.

Mindfulness also got her to restart her exercise regimen.

Remember all the orange and red in her stress indicators shown above? Well, it’s a lot better after her three-month program:

Harminder’s new lifestyle choices brought down her body age from 74 to 68 in just three months.

*The risk of developing cardiovascular disease is quantified as follows: low is a CRP level under 1.0 mg/L; average is between 1.0 and 3.0 mg/L.

If stress is your bogeyman, go to Youtube. Search for “isochronic tones” or “theta binaural beats”. (This one is among my favorites.) Plug in your earphones and prepare to get blissed out. For the science behind this, read my article, How You Can Control Your Brainwave Frequencies, The Keys To Happiness.

To get a sense of your body age, you need to know your numbers.

To know where you’re going, you need to know from whence you start.

For the motivated, consider Dr. Peter Attia’s 5 top tests everyone should take:

P.S. Hey, since you made it this far, test how fit you really are.

Physical fitness is key to a long life and good health. Your body’s capacity to transport and use oxygen during exercise (VO2 max) is the most precise measure of overall cardiovascular fitness. Based on the extensive research of The K. G. Jebsen Center of Exercise in Medicine at the Norwegian University of Science and Technology, you can easily estimate your fitness level by answering a few questions.

Take the Real Age Test and Discover Your Biological Age

Get Ticking...
We use cookies to ensure that we give you the best experience on our website. If you continue to use this site we will assume that you are happy with it.OkRead more