Practice Your Fears With Tim Ferriss 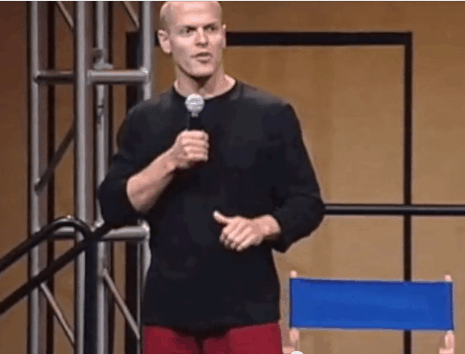 and The 4-Hour Body

, among other impressive things, makes a good case for focusing on your fears before your desires.  Watch.

WHAT WOULD catalyze a profound sense of urgency in your life?

And once this sense of urgency was catalyzed, how would you proceed to make the changes you seek?

{“Named must your fear be before banish it you can” — Yoda}

Stoicism was a school of thought from the Hellenistic period of Greek history, early 3rd century B.C.  The part of this philosophy pertinent to this discussion was espoused by the philosophers Seneca and Epictetus, who taught that,

“… because ‘virtue is sufficient for happiness,’ a sage was immune to misfortune.” (Source)

As applied to us in this life of so many choices and so much concern about choosing wrongly, my sense is that the message is:

If you can be calm in the face of your fears, there’s no downside.

For those of you who haven’t heard about Tim Ferriss, know that he’s one of those rare polymaths who has created a life wherein he follows his muse all over the world, and into all sorts of subjects.

But before he became so “free”, he had to face his fears.  In effect, he learned to be a Stoic.

The objective is to contemplate what would happen to you if the worst thing happened as a result of taking a fearsome action.

Would it really be that bad?

“If you want to improve, be content to be thought foolish and stupid”

An Exercise to Rate Your Fears

As Ferriss explains in the video below, the point of this exercise is to rehearse your worst-case scenarios.

You want to expose yourself to negative emotions such as fear, rejection, embarrassment and financial threat, so as to inoculate yourself from your reaction to these things should you face them in the future.

Take out a piece of paper and make three columns:

Rate them.  Meaning, say on a scale of 1 to 10 (bad to good), rate each of the things in the three columns.

For instance, if a terrible thing that could result from taking an action is rated a 2 (negatively impactful), but the probability of acting to minimize that from happening is rated an 8, and that, furthermore, should that terrible thing happen anyway, the recovery from it is rated a 7…. well, then, this terrible thing ain’t too terrible after all.

What you’ve done is — rather than avoid what you fear — you’ve defined it.

You may find that many of the fears you have are based on undervaluing the things that are easily obtainable.

Define your fears before your goals.

Now to the video of Tim Ferriss presenting these ideas to a Google employee audience:

What do you think?

If you have any thoughts about how to overcome the fears that hold us back, please present them in the Comments section below.