How Many Meals Per Day Do You Think Is Optimum? 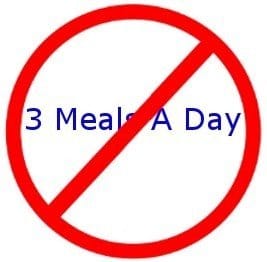 There’s a controversy swirling about. How many meals eaten per day is optimum for health? The traditional three full squares, or five, or six?  Turns out, it depends on you.  Three Doctors and two health Twitterers weigh in.

How Many Daily Meals is Optimum?

SOMETIMES I need to ponder about what to blog about.  Throughout the week I save various articles that I might want to mention, expound or refute.

And then, of course, there’s the stuff taken from my own experiences and ruminations.

Today’s subject, however, is from the “slammed down my throat” category.

Well, actually, that sounds a little harsh. What I mean to say is that I cannot avoid writing about the subject of today’s post because it has thrice jumped out in front of me.

First, it was an article that Dr. Andrew Weil posted on Huffpost that was primarily focused on intermittent fasting, but began as a refutation of the in-vogue six mini meals per day advice commonly given by health expert types.  He writes:

– In practice, those extra meals usually aren’t vegetable-intensive, home-cooked ones. These days, they are likely to be “energy bars” (a euphemism for candy bars), snack mixes, and so on. In other words, high-glycemic-load processed snacks.

-When people are told to “eat many small meals,” what they may actually hear is “eat all the time,” making them likely to respond with some degree of compulsive overeating. It’s no coincidence, I think, that obesity rates began rising rapidly in the 1980s more or less in tandem with this widespread endorsement of more frequent meals. (The other major culprit was the government’s scientifically shaky “low-fat” dietary recommendation that led to rampant overconsumption of carbohydrates.)”

You know Dr. Weil – he’s the avuncular, smiling, bearded, bald guy that writes a lot of books and appears in the media everywhere. (DrWeil.com)  He looks like this ————–>

The second thing that jumped in front of me was a section of a chapter in a book I’m currently reading by Dr. Jeffery Life, The Life Plan: How Any Man Can Achieve Lasting Health, Great Sex, and a Stronger, Leaner Body

“Scientific studies continue to reinforce the notion that the best way to eat if you want to get rid of body fat, gain muscle, reduce your risks for heart disease and other degenerative diseases, and not to get old is to eat five to six small meals every day.” (Page 51, The Life Plan.)

You may not know Dr. Life, but you may have seen his ubiquitous image in advertisements for Cenegenics. 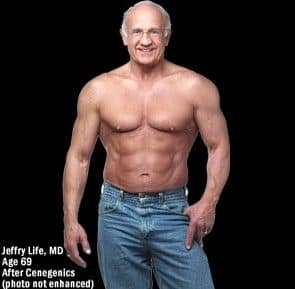 Third to jump out before me: Twitter.  Adam Bornstein @BornFitness (Editorial Director of Livestrong.com), Dr. Yoni Freedhoff @YoniFreedhoff (Editor, I guess, of WeightyMatters.com) and Derek Flanzraich @TheDerek (Founder/CEO of Greatest.com) have today tweeted about the many-a-day meal regimen.

Given that the platform was Twitter, their presentations were terse, but not unfavorable toward the many-meal plan.

But there was a link to Dr. Freedhoff’s post, How Many Meals a Day Should You Eat?, which starts out this way:

“Looking to the evidence base isn’t much help either as there’s plenty of evidence to support pretty much each and every eating style, modality, and diet.  Moreover, I’d argue that even if the evidence did firmly fall into the camp of one style or diet being “the best“, that wouldn’t change the fact that following it may prove non-enjoyable (and hence non-sustainable) to many.”

This is Derek:
[Update: Derek informs me that he wasn’t a part of this “discussion”, which invariably means that I’m hallucinating. So, we don’t know what his view is on this momentous topic.]

So, what’s the truth?

As you can expect from an answer to such a question, the truth is relative and thereby will only “set you free” to the extent that you succumb to the assumptions.

Dr. Weil is writing for the consumption of the general audience.  Everybody.

Weil’s underlying assumption is that although the average person might dream about it, such a person is not on a decisive quest to reduce fat, build muscle or live forever (aka Dr. Life).  The average person will, consequently, overeat the wrong food during a daily multi-meal fest.

For such people, three squares a day is best, Dr. Weil admonishes, and if you want to mix it up, try fasting from time to time.

By now you can make an educated guess about Dr. Life’s underlying assumptions that cause him to assert that multi daily meals are good.

Yes, his (primarily middle age male) audience is on a quest to reduce body fat, get hormonally balanced, increase testosterone, and build muscle.  For these folks several meals each day is the right way to go, he argues, because they’re selecting the right foods in the right amounts to feed bodies that are being tasked to grow muscle.

My guess is that the first two support the third’s assertion that, like I’m saying here, the benefit of multi meals to any individual depends on the individual.

“In my clinical practice, I’m not married to anything other than a person living the healthiest life they can honestly enjoy.

To which I’ll just reiterate that what’s “right” for a person is a relative truth relating to what, how and why he’s doing whatever he’s doing in life.

So, my snarky conclusion, my dear readers is, before you jump on a bandwagon, know how high you’re willing to leap and if you’ll like the music played.

(Translation: If you’re already eating too much of the wrong thing with three meals per day, unless you’ve had a health conversion, six meals per are unlikely to do you much good.)

P.S. Please tell us in the Comments section below how many meals you endeavor to eat each day, and why.