The Most Nutritionally Dense Foods; A Doctor and Billionaire Agree

Leap into good health by selecting foods with the highest nutritional density scores. Here a medical doctor and a research-oriented billionaire show you the best foods on the planet for vibrant health and longevity. 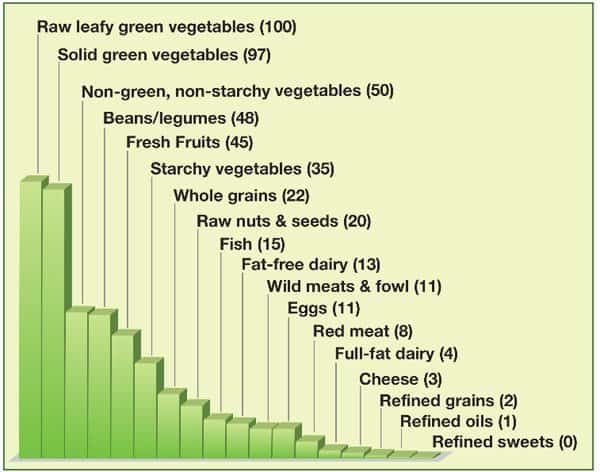 DO YOU know ANDI?

“ANDI” is the acronym for “Aggregate Nutrient Density Index”, which is the numerical measurement of the nutritional density of food, including its vitamin, mineral, antioxidant, and phytochemical composition. The index was developed by Dr. Joel Fuhrman of Eat Right America.

[Read how Dr. Fuhrman’s vegetarian diet stacks up to the paleo diet here.]

1. Your body gets the best fuel for growth, energy and repair; and
2. You get fuller with less calories.

Well, turns out, (apparently) there’s lots not to like about many of the most nutritionally dense foods, because so few of us eat them regularly. Instead, we go for the dopamine rush of salt/sugar/fat/crunch.

Once your palette is lathered by additive-designed manufactured “food”, the ole garden variety (you know, the stuff that grows on farms) simply can not compete.

It’s like someone who can no longer taste the natural salt occurring in food because he adds salt to everything, and/or is accustomed to boxed, canned foods or restaurant food that invariably have copious amounts of salt added.

Well, then, consider gradually adding some ANDI foods to your diet.

One easy way to do this is to get a pile of greens into your blender and whip up a morning green drink for breakfast.

Most of the year, I’ve got kale, red chard, arugula, cilantro and various lettuce species growing in my backyard garden.

Each morning, I putter around the house and clip some greens that then get stuffed into my blender, along with hemp and sprout protein powder, chia seeds, blueberries, fish oil, chlorophyll and Indian gooseberry (for high blood sugar).

A long time veggie juicer, I decided to also grind some greens in the blender after I discovered that my great value NutriBullet blender does a great job of liquefying all the ingredients I stuff in there.

Which is to say, you can cross out the excuse that you’d need to ransom your kids’ education for a blender good enough to liquefy your veggies.

OK, back to the esteemed Dr. Fuhrman, and I’ll throw in a billionaire as well.

At this point you might have an inkling that Dr. Fuhrman extols the value and benefits of having a plant based diet.

He has good company.

There’ this billionaire, David Murdock, who has spent millions identifying the healthiest foods on the planet, and they also are primarily plant based.

Mr. Murdock hasn’t ranked the food as does Dr. Fuhrman with his ANDI scale, but the research he sponsored has come up with the 33 healthiest foods on earth, which I list in An 86 Year-old Billionaire’s Recipe for Longevity. (He’s now 90 years old!)

I was interested to learn which food selections made both lists — Fuhrman’s most nutritious and Murdock’s top 33, so below I copied/pasted Fuhramn’s ANDI list and underlined those foods also appearing on Murdock’s list.

Before you scan it, note something I picked up from the Life Extension Foundation’s Dr. Mike Smith, who referring to the ANDI list said this:

“A food source can be given an ANDI score anywhere from 1 to 1,000, with higher numbers indicating more nutrient dense foods. However, following a diet that’s based solely on ANDI food probably isn’t a great idea. Here’s why: The ANDI doesn’t take things like fat content into account. If you were to eat exclusively ANDI foods with scores of 800–1000, you definitely wouldn’t get enough of the good fats into your body.” (Source)

I mention this because, as Dr. Smith suggests, even a plant-dominated diet needs to include the three macronutrients — protein, fat and carbohydrates — even if some of those respective foods are not high up on the nutrient density score.

And now, here’s the ANDI food chart with David Murdock’s healthy food list noted by those foods that are underlined.

[GO here for David Murdock’s list of the 33 healthiest foods.]

Well, that wraps up another post.  Let us know if you think blending your greens might be a good, fast, doable way for you to get high density nutrition.

Just put your “two cents” in the Comments below.

Thanks, and ciao for now.