No more reflexive reactions to the images in our heads. 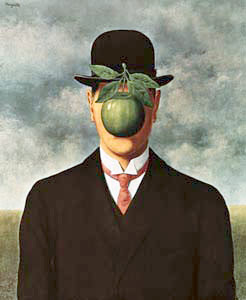 Apple's On My Mind

THE OVERINDULGENCE that often accompanies the Holiday Season makes this a good time to write about a technique I use to slow down the rapacious attack on my svelte gut (the one I have one in my dream state).

Christmas, Hanukkah and the rest is over, but perhaps the ill effects you may be experiencing born of eyes bigger than stomach will hone your attention to this subject, particularly given that New Year’s — and its attendant debauchery — is right around the corner.

I thought to write about this just last night, Christmas night, after having eaten my fair share of turkey, stuffing, mashed potatoes, etc., etc.  Staring at a Christmas special on TV with my family (with five NBA games being played that day, this was a torture), my mind started to become preoccupied with pie.

Yes, no more than an hour after indulging with gusto at the dinner table, something somewhere was signaling me to move to the kitchen to eat apple pie.  I wasn’t hungry.  The TV special was engaging enough.  Yet that picture of a perfectly cut triangle of apple pie kept entering my mind’s eye.

What in the heck was going on!?

I’ve often wondered about that… why, despite not being hungry, does a food apparition appear so indelibly in our minds, resistant to willpower, whispering — nay — shouting for us to bend to its will.

It’s like the only way to excise the image from the mind’s screen is to put the corporeal manifestation of that image — real food — into our mouths.  Soon after that ghostly image appears, like good robotrons, we stand up, go directly to the food in question and chomp away.

Actually, I have been fighting back for some time, with modest results to be sure, but better than going into robotron mode.  What I do is superior to conjuring a flailing modicum of willpower.  Instead, I employ the ole “Substitution Effect”.

I first encountered the concept of Substitution Effect in college economics classes.  Over time, I’ve found this useful to loosely apply to things other than economics.  In the case at hand, I say rather than get that piece of apple pie, get something else, a substitute.

1. Sitting in front of the TV.

(Fine, gonna use those juices)

4. Take the apple pie and turn it into an apple (that’s an apple pie without the bad stuff).

(Substitution effect is being engaged.)

5. Let those juices juice up the desire for the apple.

6. Surrender to robotron impulse to go to kitchen, but eat apple, not apple pie.

7. Return to TV and mindlessly crunch the apple, my mind once again a tabula rasa.

Take away from this story:

We don’t hafta respond to the images (or thoughts) in our heads.  Don’t like it or want it, replace it — just use the Substitution Effect.

Let me know how this works for you… use the Comments form below.