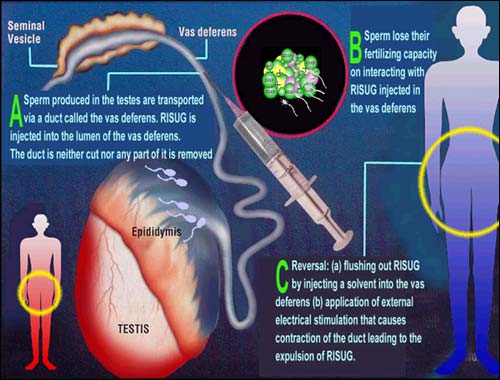 Ladies and Gents… have you been seeking a male contraceptive method?  One that’s simple, safe, relatively cheap and lasts a really long time?  Well, if the gentleman is really brave, you need to learn about why the best birth control in the world may be for men. 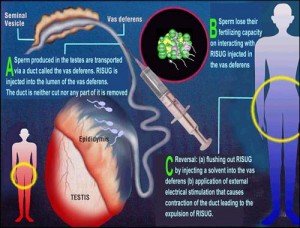 Click to enlarge and read the description of how this male birth control method works.

OK, EVEN though I don’t seem to have a specific subject focus for this blog (health, after all, is a BIG subject), I’ll go way out on a limb and state that birth control is off topic.

But I’m going to write about it anyway.

A friend of the female persuasion sent me an article about a new simple procedure that renders a man’s sperm infertile for a very, very long time.

“Blog about that!”, she declared.

“You don’t even know what your topic is on your blog”, she countered.


Then a mutual friend of ours, again, of the fairer sex was recruited to twist my arm.

“Why is birth control for men so important to all of you”, I whined.

As in a chorus, they sang in various ways the same song that distills down to:

“Because it’s about time that you guys carried the burden of birth control!”

And so with that as an explanation, let me get into the meat of this male birth control matter.

For Brave Men Only (and the women beside them)

Jon Clinkenbeard, author of The Best Birth Control In The World Is For Men, began his article thus:

“If I were going to describe the perfect contraceptive, it would go something like this: no babies, no latex, no daily pill to remember, no hormones to interfere with mood or sex drive, no negative health effects whatsoever, and 100 percent effectiveness. The funny thing is, something like that currently exists.”

And indeed it does, but I’m not letting any needle puncture my testes.

Yes, this “perfect contraceptive” for men is some gluey mixture that’s injected into their scrotum and, in effect, tears apart the sperm by something called the “polyelectrolytic effect.”

The result is that a man can experience the usual delights of ejaculation (sperm does exit), but it carries nothing in it that will impregnate his partner.

Apparently, this procedure is relatively cheap and simple to administer to those remarkably brave men who are willing to proffer their junk to a sharp needle.

The procedure, called RISUG in India (Reversible Inhibition of Sperm Under Guidance), takes about 15 minutes with a doctor clutching a syringe, is effective after about three days, and lasts for 10 or more years.

If during that time period, you get the notion that maybe you’d like to procreate, a trip back to the doctor’s office for another injection that will flush out the gel will get you back to your dangerous self.

For those of who not looking to stop procreation… indeed for those with a baby in the oven, planning for one, or already had one, you’ll not want to miss these amazing photos of a baby from conception to birth.  (Actually, these pics are for everyone ready to be amazed by nature.)