Here’s How Joe Warner Got His 6-Pack in Just 12 Weeks!

Onetime skinny-but-fat Joe Warner exchanged his aerobic routine for some anaerobic intensity and completely transformed his body, losing 17.5 pounds of jiggly and adding 22 pounds of brawn.  Here’s how he did it… 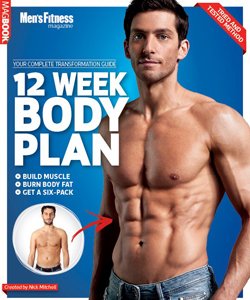 PAY ENOUGH attention to matters of health and you’ll soon be dazed and confused.  That’s because few things in the health world seem to hold steady.

Once upon a time coffee was bad for you, and now many health gurus extol its virtues (as this debate will show).

Once upon a time saturated fat created the dreaded arterial plaque leading to heart disease, now some with flashy credentials say it just ain’t so.

Once upon a time the way to lose fat was, naturally, on a low-fat diet, but not – au contraire – it’s the carbs that make you fat, not the fat.

And now, at least for Joe Warner as depicted in his new book, 12 Week Body Plan

you can build muscle and lose fat fast by working out less, along with that aforementioned low carb diet.

This story caught my attention because recently another debate has been strolling around the Interwebs.

For a long time it was conventional wisdom that aerobic exercise was the best way to lose body fat.

Then it became fashionable among those who pay attention to these things that really the best way to lose body fat is with a combination of resistance training to build muscle and high intensity interval training (“HIIT”), which boosts your body’s production of human growth hormone, a metabolic driver for weight loss, among other things.

And then, just over the last month or so, I started seeing various articles scattered about that cited studies showing that aerobics — once again — is better than resistance training et al for reducing fat, such as this one on The Huffington Post.

Well, I’m not, cause I have this thing called “experience”, and what I know from that are three things:

From what I’ve read about Joe Warner’s experience getting those abs to pop after 12 weeks of exercise and diet is that his experience mirrors mine. (Ahem, minus the six-pack.)

Which is to say, resistance training + HITT + some aerobics served on a bed of high protein/low carb food = muscle – fat.

How Did Joe Warner Get Six-Pack Abs in 12 Weeks?

Importantly, in order to slab on a 22 pound slab of muscle in only 12 weeks, Joe Warner also ate a lot of lean protein.  I haven’t read how much protein, but would guess that it was within 85% in grams of his total body weight in pounds.

I don’t know what Joe Warner weighs, and this 85% metric is simply one espoused by a number of weight lifting coaches in order to maximize the growth of lean body mass (muscle).

That’s a lot of protein, even for a 200-pounder!  And there’s considerable debate about just how much protein consumption is ideal, and how it should be measured. Some, for instance, say that the grams of protein per body weight should be some percent of lean body mass (your no body fat weight), not actual weight.

I’ve never consumed that much protein, and wouldn’t even know how to do so, given that I’m not much of a meat eater and am disinclined to eat protein powder all day.  I’m not advocating you pound down 170 grams either.  What I do suggest is that you experiment.

Add protein to your diet in its various forms (lean meat, legumes, fish, high quality powders), preferably some at each meal and even with snacks. Get a sense for how much you’re consuming.  See if about 50% of total body weight (a much easier number to know) is sufficient to feed your muscles, allowing them to recover from exercise and grow in size and strength.  If not, try increasing the amount of protein consumed.

For more about Joe Warner and his plan, read this Yahoo Health article, or get his book.

Good luck, and over and out.

P.S. Although protein is important, it will not help you overcome inadequate testosterone production. Testosterone start’s declining in their thrities. Those who want to maintain the lean muscle mass and vigor of their youth either get bioidentical testosterone treatments prescribed by their doctor, or use supplements. I fall into the supplement catagory, and highly recommend Mike Mahler’s Aggressive Strength Testosterone Booster (aff link).  You’ll be impressed by how well it works, as noted by the many, many testimonials at Mike’s site.

Click the image to learn more about, or to buy, Joe Warner’s book:

May you use Joe Warner’s example and the resources mentioned to build the body you want!