The 5 Supplements, 2 Drugs and 1 Food That Can De-stress Your Life and Increase Your Lifespan

Although it’s complicated to prove, studies reveal that you can reduce stress and increase your lifespan simply by properly feeding yourself – and your bacteria. Yes, those 100 trillion critters can’t be ignored. Here’s what to do…

IT’S AMAZING to me how doing simple things can have such profound effects. As you’ll soon discover, just tweaking your supplements and diet can substantially affect your stress levels, your health and potentially increase your lifespan.

Certainly worth checking a bit of time learning about.

What you’ll learn in this article:

Let’s begin at the School of Medicine at Indiana University. Scientists there joined with their brethren at the Scripps Research Institute.  Together they identified a series of genes that may modulate the effects of good or bad mood and response to stress on lifespan as reported by Science Daily.

The study was led by Alexander B. Niculescu III, M.D., Ph.D., professor of psychiatry and medical neuroscience at the Indiana University School of Medicine. He and his team grabbed some worms (C. elegans, a roundworm) and humans. With these two decidedly different species, they identified a series of genes that may modulate the effects of good or bad mood and the response to stress on lifespan. In particular, the research pointed to a gene known as ANK3 as playing a key role in affecting longevity. 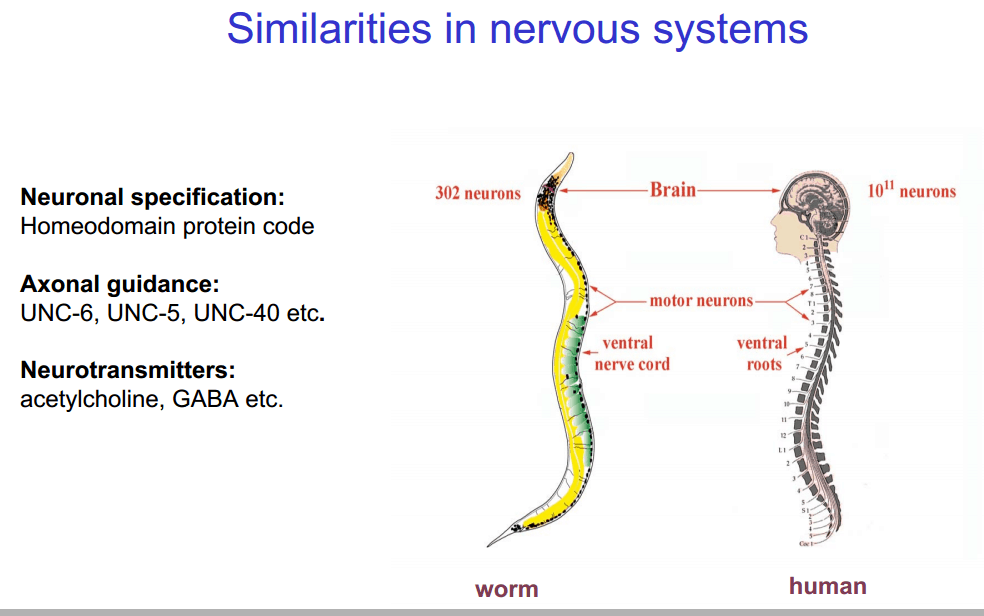 What do roundworms have to do with humans? Inexplicably, the majority of human disease genes and disease pathways are present in C. elegans. (1) In this study, the researchers first identified which worm genes affected by an antidepressant drug called “mianserin” are also in humans. These are genes that are associated with depressive symptoms.

What was discovered is that mitochondrial dysfunction was the top biological pathway for mood and stress-modulated longevity. You may be aware that there’s increasing evidence suggesting a causative link between mitochondrial dysfunction and aging. This has spawned a cottage industry of supplements (such as Nicotinamide Riboside and Elysium’s Basis supplement) that seek to beef up mitochondrial function, which I’ve covered in various articles published on this site.

Click here for links to my articles discussing mitochondria.

Do These 2 Anti-aging Pills Really Work? 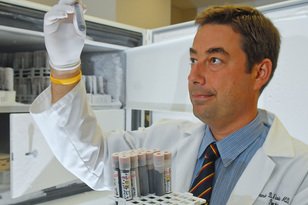 of compounds that may act on these ANK3 genes and promote longevity; namely:

(Note: Read why Pterostilibene is probably better than Resveratrol.)

You now have a list of five supplements and two pharmaceutical drugs to consider adding to your anti-aging regimen, but what about that food ingredient I mentioned?

Fiber, the 1 Food Substance You Must Consume Aplenty

Could it be that totally uninspiring, mundane fiber could have anything to do with extending both healthspan (the number of years lived healthily) and lifespan?

Yes, fiber is our “1 Food” (well, really a dietary material) that does all that.

Not to mention, longevity.

To glean how fiber might increase your lifespan, we hop down to Australia where researchers from the Westmead Institute for Medical Research lead by Professor Bamini Gopinath, PhD. 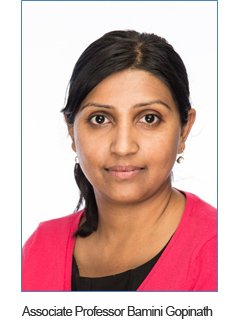 The Australian research team performed a benchmark population-based study that examined a group of more than 1,600 adults, ages 50 years and older, for systemic diseases and long-term sensory loss risk factors as reported at WorldHealth.net.

Their focus was on the relationship between carbohydrate nutrition and healthy aging. The factors they examined included:

You can already guess the conclusion: The fiber made the greatest difference in what the researchers called “successful aging” (which was defined as the absence of disability, cognitive impairment, depressive symptoms, respiratory symptoms, and chronic diseases including cancer coronary artery disease, and stroke.)

Perhaps you’d think that the level of sugar intake would have the largest impact on successful aging, and ordinarily it might. However, as Dr. Gopinath pointed out, the group they studied were older adults, whose carbonated and sugary drink intake was fairly low. If sugar consumption was high, it would likely have a deleterious affect on aging.

Do you consume sugary drinks and/or food?  If so, do yourself a favor and become familar with the risks of consuming sugar:

How Sugar Messes With Your Libido

Sugar Lover, Which Type Are You?

How Sugary Is Your Blood?

Are You Getting Fat and Sick From Sugar?

Are You A Bit Addicted to the Holy Trinity of Salt, Sugar and Fat?

Out of all the variables that we looked at, fiber intake — which is a type of carbohydrate that the body can’t digest — had the strongest influence.

Essentially, we found that those who had the highest intake of fiber or total fiber actually had an almost 80 percent greater likelihood of living a long and healthy life over a 10-year follow-up. That is, they were less likely to suffer from hypertension, diabetes, dementia, depression, and functional disability. (4)

Why was fiber so meaningful to successful aging?

Well, dear reader, I’m going to make some learned guesses to answer that question, because none were described in the article.

First off, given that high blood pressure can lead to various cardiovascular diseases and that heart disease is the leading cause of death in the United States, it’s safe to assume that anything that reduces heart disease increases longevity.

Same thing with diabetes. WebMD reports that diabeties cuts approximately 8.5 years off the life span of the average 50-year-old compared to the same-aged non-diabetic. In fact, older adults with diabetes have a lower life expectancy at every age compared to people who don’t have the disease.

But there may be more!

I’m going to go out on the proverbial limb with my contention that fiber may be so important to extending both healthspan and lifespan because it feeds the trillions of beneficial bacteria that make up our microbiome.

I spent last week twiddling away on the Microbiota chapter of my forthcoming book, The Ageproof Method, and as you’ll see in a minute, fiber is a big part of such a story.

Microbiota is the ecological community of various beneficial and harmful microorganisms that literally share our body space, both inside us (particularly in our gastrointestinal tract) and upon us (our skin). It may be mind-boggling to conceive it, but there are about ten times more bacterial cells on and in you than those that are you, as in human cells.

The discoveries made about our microbiota and its affect on our health is fairly new and astounding. The evidence says that all those buggies profoundly influence our immune system, inflammation, gut health, body composition, brain function, mood — and through all that and more – possibly our longevity.

Pertinent to our topic at hand (fiber) the upshot of all this is that you want to feed the beneficial bacteria that is so important to health, and starve the pathogenic bastards that want to send you to an early grave after making you chronically ill for a spell.

In my article, The 4 Food Solution to the 100 Trillion Reasons You’re Fat, Sick and Depressed, I spelled out just how to feed those good bugs. I’ll save you some reading… you need to do this on a regular basis: 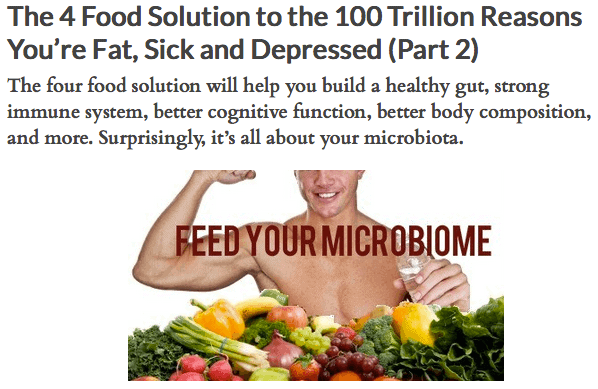 Probiotics are beneficial bacteria and yeast, and can number in the billions in capsules of them offered by many supplement companies, and are also found mainly in milk byproducts, such as yogurt and kefir.

Prebiotics are not the probiotics, though they’re typically lumped together. Prebiotics are food (kinda like fertilizer) for probiotics, typically found in specialized plant fibers, such as Jerusleum Artichokes, asparagus, leeks and yams. It’s more important to focus on consuming them than probiotics, which you can glean by the following table provided by Prebiotin and the video below:

One more thing about fiber is that there are two kinds, soluble and insoluble. As the name suggests, soluble fiber can be digested, whereas insoluble fiber passes through our digestive system largely intact.

Here’s a chart that breaks down the basics about fiber, which I put together from material from a University of Colorado document:

slowly. -Move bulk through the intestines.

-Control and balance the pH (acidity) in the intestines.

-Fruits such as oranges and apples.

-Vegetables such as carrots.

Last but not least, you need to know about Resistant Starch!

Resistant Starch is heralded as a biohack of the decade because all by its lonesome it can:

There are four different types of Resistant Starch, which you can read about here, but suffice to say that you want to consume RS2 (the second type) that can be found in uncooked potato, green banana flour and high amylose corn, as well as in supplement formulations, such as Resistant Starch Powder.

Got four minutes? If so, watch this animation of how Resistant Starch moves through the intestine, feeds the healthy bacteria of the gut Microbiome and helps prevent cancer:

(Go here for an excellent overview of the health benefits of Resistant Starch and why you must consume at least 20 grams a day of it.)

Which leaves us with the fourth important fiborous food source for our microbiome, pea protein.

You could eat peas, but in their natural state, peas don’t have much protein, so why not kill two birds with one stone and get your protein and cultivate a healthy microbiome by consuming pea protein powder?

Within 30 minutes of awakening, make a smoothie consisting of:

The amount of the liquid is dependent on the consistency desired. Blend it all up and let it sit for a few minutes to let the seeds expand a bit (but make sure they don’t make an undrinkable pudding of the mixture) before drinking.

This smoothie will feed the beneficial bacteria in you, satiate you and ensure you start your day on the right foot (whatever that means).