The only way to move forward is to take responsibility for your life. Change your narrative. Get empowered. Recognize that you may not control what happens to you, but you can control your response. Look in the mirror and say, “I am responsible!”. Here’s why… 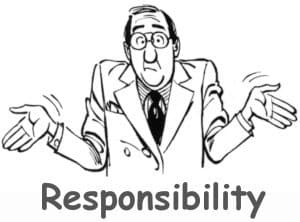 THIS LAST day of the year tends to get us focused on what we wish to experience next year.

The thing is, if you want a different tomorrow than your yesterdays, your narrative may have to change.  As I reminded readers in my last post,

“Doing the same thing and expecting a different result is the definition of insanity.”

Let me tell you one thing that may help you get what you want.  The one statement, said earnestly, that can break the old, repeated patterns that keep our life looking the same year after year.

Look in the mirror and say out loud:

Go over all the things that…

And then simply acknowledge that you’re responsible for all of it.

In my case, I had a charismatic, but pretty awful father who left his family stranded in Africa when I was a kid, and then did everything he could to torpedo us till the kids were emancipated and out on our own.  Then it was benign neglect.

After graduate school, I became a corporate-worker meteorite, exploding past my peers in earnings and prestige. Twice, some company bought mine and gravity took hold of my career and I swiftly fell to earth. Another time, 2008, the financial crises knocked my employer to its knees and me with it.

You may say, “But, Joe, how were you responsible for the financial crisis?”

I wasn’t, nor was I responsible for what my father did, nor for those company buy-outs that flattened my career.

You see, that’s it in a nutshell – when it comes to this responsibility thing, it’s not that we’re responsible for every event in the world, but how we respond to them.

As the saying goes, “Shit Happens”, but we don’t need to roll in it.

Yes, there is plenty of it around.  The older you are, the more of it you may see, if that’s your inclination.

Many of us orient our psychology around helplessness and victimhood.  Captured in the vortex of this drama, our personal narrative is that our struggles are beset upon us by others – they’re to blame.

Certainly, we all know many people who can not change the channel, so fixed are they on a narrative that explains their situations because of what others did to them… their, parents, siblings, children, employers, government.

These people are imprisoned by their past.

The key to get out of prison and get the life you want is to take responsibility for it.

I think about it this way…

Envision a mighty river that divides into two main tributaries, each that further divide into streams. The one tributary is Love. The other is Fear.

Let’s next, turn to Alex Green, and his book, An Embarrassment of Riches

, in which he describes the four root causes of negative emotions.

He says that studies show that once you identify the root causes of negative emotions, you can begin to banish them from your life and no longer be ruled by them.

1. Justification. You can be negative only as long as you convince yourself that you are entitled to be angry. Unhappy individuals will always be found explaining and elaborating on the profound unfairness of their situation.

3. Blaming. There is no quality more closely associated with unhappiness than the habit of blaming others for our difficulties.

4. Poor self-esteem. Low self-esteem is generally characterized by a hypersensitivity to the opinions of others. No one wants to lose the respect of others, but conscientious people don’t need to fret about what other people think.

Although the words are not magic, Alex Green emphasizes the one way to begin to get rid of these underlying factors that create negative emotions is to acknowledge our responsibility for them.

Whether it’s joblessness, substance abuse, overspending, obesity, or interpersonal havoc, you move closer to a solution the moment you say,

You’d have to be a good actor to be able to say these words and still feel angry. The very act of taking responsibility begins to dissipate negative emotions.

And yet, strangely, some of us would prefer to jump from a plane with an untested parachute than look in a mirror and say these three words.

Whether they be the people in your personal or business life, everyone seeks relationships with those who are willing and able to think, who are self-directing and self-managing, who respond to problems proactively rather than merely waiting for someone else’s solutions.

A study done in New York a few years ago found that people who ranked in the top 3% in every field had a special attitude that set them apart from average performers in their industries. It was this: They chose to view themselves as self-employed throughout their careers, no matter who signed their paychecks.

These are people who set goals, make plans, establish measures, and get results.  (For some insights on how to do this, read, How To Change When Change Is Hard.)

Choosing responsibility changes everything. It puts you in the driver’s seat. You now have control. Your thoughts, impulses, feelings, and actions are yours, not those imposed upon you. You are accountable for the consequences they bring and the impact they have on others.

This is not a burden, incidentally. It’s a privilege and an honor to take ownership of your actions. It creates freedom and control. It gives meaning to life.

Self-reliance is the great source of personal power. We create ourselves, shape our identity, and determine the course of our lives by that which we are willing to take responsibility.

Why would you have it any other way?

In this new year, may you get in the driver’s seat, own the road you travel, and reach your most cherished destination.