How You Can Beat Chronic Inflammation (and Age Better) with Exercise, Food and Supplements 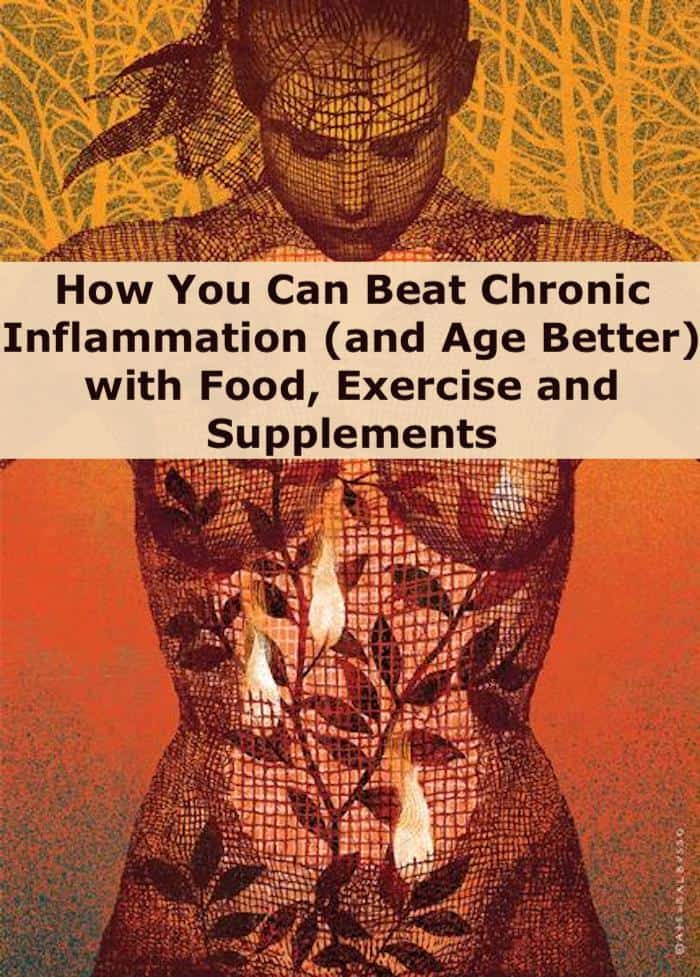 You need to beat chronic inflammation, because you have it (or you will) and it makes everything worse as you age. Read the science behind these claims and how to use exercise, food and supplements as your anti-inflammation strategy.

IT’S A fine, sunny day. You’re riding the range on your favorite horse, a chestnut colored stallion with a white blaze on his forehead. Seeing a young calf tangled in fence wire, you dismount and wrestle with cow and wire to free her. In the tumult, you puncture the skin on your hand with the razor-sharp wire. That cut becomes inflamed, and that’s a good thing.

OK, cowboy, maybe you don’t really have a horse and barbed wire to content with, but (presumably) you do have a body and it’s aging. What undeniably comes with aging is inflammation. In fact, inflammation is so connected with aging that there’s a term for it,” Inflammaging“. In this case, we’re not talking about the inflammation that happens as a result of a cut on your hand, but the chronic inflammation that, in effect, makes small cuts everywhere inside your body with increasing harm as we get older.

If you want to age well, you need to beat chronic inflammation. If you don’t, not much else matters when it comes to a healthy and long lifespan.

For the rest of this piece, I will refer to Harvard Health for its description of inflammation and the health issues it causes, as well as research studies on aging and inflammation.

Harvard Health gives a good explanation about the difference between acute and chronic inflammation.

You have experienced inflammation if you’ve ever twisted your knee, cut your finger, been stung by an insect, or got tangled in barbed wire. 😉 At one point or another, we’ve all experienced the sensations of pain, redness, swelling, and heat that result from an injury or infection; these are hallmarks of the inflammatory process.

Inflammation represents an essential survival mechanism that helps the body fight off hostile microbes and repair damaged tissue. That’s a good thing. But there’s another side of inflammation that’s no good at all, because it’s harmful to your health. The evidence is clear: inflammation, promoted in part by such factors as obesity, smoking, and a sedentary lifestyle, contributes to a variety of diseases.

There are two forms of inflammation: acute and chronic.

Acute inflammation comes on rapidly, usually within minutes, but is generally short-lived. This is what happens in response to that barbed wire cutting your hand. Many of the mechanisms that spring into action to destroy invading microbes switch gears to cart away dead cells and repair damaged ones. This cycle returns the affected area to a state of balance, and inflammation dissipates within a few hours or days.

Chronic inflammation often begins with the same cellular response as acute inflammation, but morphs into a lingering state that persists for months or years when the immune system response fails to fix the problem. This inflammation may stay active even after the first threat has been eliminated.

In other cases, low-level inflammation becomes activated even when there is no clear injury or disease. Unchecked, the immune system prompts white blood cells to attack nearby healthy tissues and organs, setting up a chronic inflammatory process that plays a central role in some of the most challenging diseases of our time, including rheumatoid arthritis, cancer, heart disease, diabetes, asthma, and even Alzheimer’s.

Lifestyle choices, such as exercise, diet and supplements play a role in the diseases and conditions brought about by chronic inflammation, and each will be discussed below. My suggestion is that you absorb what you need to know and then put an action plan in place to beat chronic inflammation.

Your gut “harbors more than 100 trillion microbial cells, which have an essential role in human metabolic regulation via their symbiotic interactions with the host”, says Jeremy K. Nicholson, Ph.D. et al in their 2016 study that examined the impact of gut microbiota (bacteria) on inflammation, obesity and metabolic disease.

The scientists make these observations:

Inflammation and A Shrinking Brain

A study published Nov. 1, 2017, in Neurology found that having certain inflammatory markers in midlife was associated with brain shrinkage and poor memory in older age.

Researchers measured five inflammation biomarkers in about 1,600 middle-aged people and gave them brain scans and a memory test about 25 years later. Compared with people with no elevated inflammation markers, people with high levels of three or more biomarkers scored lower on the memory test and had about 5% shrinkage in the hippocampus and other parts of the brain associated with Alzheimer’s disease.

Inflammation is a key part of arthritis and other chronic joint diseases, says Harvard Health.

Gout is a painful and potentially debilitating form of inflammatory arthritis. It develops when tiny, needle-shaped crystals of uric acid (a biological waste product) accumulate in the joints. The presence of these uric acid crystals triggers the release of cytokines, and these inflammatory messengers attract neutrophils and other white blood cells to the scene.

Gout can affect the big toe, a knee, ankle, wrist, foot, or finger.

Early on, gout flare-ups tend to be intermittent, but if persistent for a long time, the joint pain can mimic other types of arthritis. After several years, uric acid crystals may collect in the joints or tendons. They can also collect under the skin, forming whitish deposits. They are called tophi, which are lumps of tissue that form under the skin of fingers, knuckles, and elsewhere.

Most people with gout make too much uric acid. Often they have a family history of the disease, are overweight and have high blood pressure, high cholesterol, or diabetes. High protein diets, especially those rich in organ foods such as liver, kidney, and sweetbreads can raise uric acid levels and increase the chance of gouty attacks. Some people develop gout because their kidneys excrete too little uric acid.

Now that its been established that chronic inflammation is a very bad thing, how do you test for it and then beat it into submission?

Your Tests For Chronic Inflammation

Before you spend time, energy and money to beat chronic inflammation, it makes sense to first check if you have it. Unless you have an exceptional anti-inflammatory diet (here’s one from Dr. Andrew Weil) and exercise regularly (more on both below), you’re likely to have low-grade, chronic inflammation, which typically increases as you age:

The graph above shows how ESR (erythrocyte sedimentation rate), a measure of chronic inflammation,  increases with age. I’ll speak more about ESR in a moment, but suffice to say here is that the older you are, the more chronic inflammation you need to beat down into submission.

Whether or not you think that the graph above does not relate to you, try a self-assessment for chronic inflammation, and if in doubt, get some blood work done.

ClevelandHeartLab says that you can self-assess your likelihood of having chronic inflammation via these four methods:

(1) Measure your waist. Visceral fat (the kind that surrounds abdominal organs) has been shown to secrete high levels of inflammatory molecules that may contribute to insulin resistance and cardiovascular disease.

A man’s waist should be 40 inches or less, and woman’s 35 inches or less. Frankly, that seems overly permissive. As I wrote in What Your Waist-to-Height Ratio Reveals About Your Health:

(2) Check for gum disease. You might need a dentist for a thorough assessment, but you can check yourself for discolored, receding, painful or bleeding gums. Inflammation is made worse by gum disease.

(3) Disrupted/too little sleep. Those who sleep fewer than six hours a night had average levels of the CRP test for chronic inflammation (see below) that were 25% higher than those who reported getting six to nine hours.

The three blood tests you may consider that measure chronic inflammation are:

Click here to learn more about the CRP test.

According to the Mayo Clinic, the normal reference range is 0-22 mm/hr for men and 0-29 mm/hr for women.

Click here to learn more about the ESR test.

This test may be overkill if chronic inflammation is your only concern.

The Cytokine Panel has the following tests:

How You Can Whip Chronic Inflammation

As with many health interventions, you can beat chronic inflammation with a combination of exercise, nutrition and supplements.

Let’s check back with the 2011 study referenced above. The authors reviewed the research on the effect of exercise on aging, and did their own study. In summary, they found that “exercise training is known to have beneficial effects across a broad spectrum of organ systems, and its anti-inflammatory actions are complicated by the intricate interplay among organs and cytokines.”

What does this all mean in terms of what exercise you should do?

Ideally, your chronic inflammation beating exercise regimen should include:

For tips on exercise, check out:

Dr. Andrew Weil has an Anti-inflammatory Food Pyramid that looks like this:

Harvard Health encourages us to cut levels of inflammation through a healthy diet:

If you’re looking for an eating plan that closely follows the tenets of anti-inflammatory eating, consider the Mediterranean diet, which is high in fruits, vegetables, nuts, whole grains, fish, and healthy oils.

This study makes a strong case for the medicinal effects of mushrooms, stating that they “include anti-inflammatory effects, with anti-inflammatory compounds of mushrooms comprising a highly diversified group in terms of their chemical structure. They include polysaccharides, terpenoids, phenolic compounds, and many other low molecular weight molecules.”

Renown mushroom expert Paul Stamets says that the turkey tail mushroom suppresses inflammatory response, enhances the microbiome, and may be a powerful adjunct cancer therapy. “We think it decloaks cancers for discovery by the immune system,” he said.  This is his brand:

Lastly, I want to give a shout out to a Subscriber named Andrea who told me that she’s getting real relief from Inflamma-Less, a product by Irwin Naturals. Given that this product’s list of ingredients are among those known to reduce chronic inflammation, I’m including it in the mix:

Final inflammation-fighing words before “Your Takeaway”:

Use DMSO Cream To Relieve Your Aches and Pains

How You Can Beat Shoulder Arthritis, Part 3