Gynostemma pentaphyllum, also called jiaogulan, is a powerful adaptagen-type herb.  Studies indicate it may help reverse some chronic illness and give your longevity a boost.  Listen to health advocate David Wolfe and herbalist Truth Calkins explore the benefits of Gynostemma. 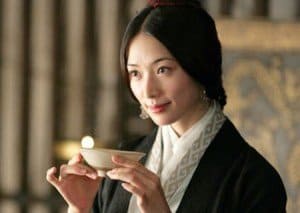 EVER ON the lookout for the means to help us live a long and strong life, I regularly dive into information that may lead me on my Ponce de León quest for the Fountain of Youth.

What’s become clear is that – so far – no one thing will do it; rather, living a long and strong life requires a mix of simultaneous, consistent actions, which include these six:

[Resource: Inspirational Alice – Dancing Under the Gallows at 107]

[Resources: Diet 101 and Superfoods Anyone?]

3. Nurtaceuticals: The common term for these are “vitamin supplements” and I break them out from “Nutrition” because, although food/drink can be the best from of bioavailable nutrition, certain nutracueticals, such as antioxidants and herbs, are often more targeted and potent.

4. Detoxification: Cleansing the ubiquitous toxins of the modern world from our lungs, skin, kidney, liver and gastrointestinal track.

5. Exercise: Beyond helping you be more functionally fit so you can climb stairs and lift yourself over a wall (hey, it may happen someday), exercise includes being flexible and properly aligned.

[Resources: How Exercise Slows the Aging Process and How to Boost Your Human Growth Hormone in 20 Minutes.]

6.  Socially/Emotionally Connected: The data clearly shows that people who are connected with their family and community live longer and happier lives.

So, as you can see, this longevity gig is not some casual, short term endeavor.  It takes a lifetime to live a long time.  And over time, we’re going to learn a lot, requiring constant tweaking of habits.  Almost daily, it seems, science is declaring yet another insight and/or another protocol that may help us reach a very ripe young age – young in terms of how we feel and what we can do.

Gynostemma/Jiaogulan is best known as a herbal medicine reputed to have powerful antioxidant and adaptogenic effects that are thought to increase longevity. Clinical research has indicated a number of therapeutic qualities of Gynostemma, such as lowering cholesterol and high blood pressure, strengthening immunity, and inhibiting cancer growth.

Here’s a quick look through some of the reported benefits of Gynostemma, as presented by wikipedia (check wikipedia for sources of the studies cited below), followed by an audio file interview between health advocate David Wolfe and herbalist Truth Calkins.  Their conversation may convince you to try this remarkable herb.

Gynostemma/Jiaogulan has been found to increase superoxide dismutase (SOD), which is a powerful endogenous cellular antioxidant. Studies have found it increases the activities of macrophages, T lymphocytes and natural killer cells and that it acts as a tumor inhibitor.

Gynostemma/Jiaogulan is known as an adaptogen, which is an herb reputed to help the body to maintain optimal homeostasis, which many scientists think is a key for longevity. Most research has been done since the 1960s when the Chinese realized that it might be an inexpensive source of adaptogenic compounds, taking pressure off of the ginseng stock.

Laboratory tests demonstrate that Gynostemma/Jiaogulan stimulates the release of nitric oxide, causing blood vessels to relax, which is one mechanism by which it reduces high blood pressure. In a double-blind study, Gynostemma/Jiaogulan administered to those with Grade II hypertension showed 82% effectiveness in reducing hypertension, compared to 46% for ginseng and 93% for Indapamide (a hypertension medication).

Gynostemma/Jiaogulan tea has been studied in a randomized controlled trial in type 2 diabetic patients. It may have potential as a hypoglycemic treatment to reduce blood glucose.

Now, Listen to health advocate David Wolfe and herbalist Truth Calkins explore the benefits of Gynostemma by clicking the picture below:

, and I’ll be writing about it again as soon as I’ve had some experience with it.  If you wish to try it, know that it’s sold in many health food stores and all over the Internet, such as on Amazon.com.

If you’ve used Gynostemma, let us know what you think of it in the Comments below.