From a chronological perspective, that makes me 64 years old. But is 64 my “real” age?

No, it’s not, and perhaps your chronological age isn’t your real age either.

can predict your “real” or biological age with great accuracy.

Using it, I learned that my bioage is 44.

Get your BioAge Test and Learn Your Real Age

You’ll need 9 common blood test metrics for your BioAge Test. If you don’t have them, Life Extension Foundation’s CBC tests provided 8 of the needed blood metrics, the 9th (CRP) provided by the C-Reactive Protein Test:

Here’s the Spreadsheet You’ll Get

The image below is from the spreadsheet I used to take my BioAge Test. Type in your email, click the green button and I will send you a link to my Google Drive where you can fill in the “Input” row of nine blood markers that you get from the two tests cited above.

The calculations will automatically be done and provide you with two versions of your BioAge, “Ptypic Age” and “DNAm Age”, which are nearly equivalent; in my case, 44.31 and 43.83 years (see red numbers below).

{Discover your own BioAge}

Continue reading to learn the science behind this method of determining your BioAge.

Essentially, everyone has two ages: a chronological age, how old the calendar says you are, and a phenotypic (or biological age), basically the age at which your body functions as it compares to average fitness or health levels.

A major goal of geroscience research is to define “biomarkers of aging”. Think of this as individual-level measures of aging that capture individual differences in the timing of disease onset, functional decline, and death over one’s lifetime.

While it’s true that chronological age is the strongest risk factor for aging-related death and disease, it’s important to distinguish chronological time from biological aging. Individuals of the same chronological age may exhibit greatly different susceptibilities to age-related diseases and death due to differences in their underlying biological aging processes. Such biomarkers of aging will be crucial to enable evaluation of interventions aimed at promoting healthier aging, by providing a measurable outcome, which unlike incidence of death and/or disease, does not require extremely long follow-up observation.

Their article (in which I go into some detail below) describes a technique for combining nine blood-work values with calendar age to calculate your Mortality Score (probability of death in the next ten years) and your Phenotypic Age, your apparent biological age as implied by your blood variables.

The calculation procedure is rather arcane, involving opaque unit conversions, exponentials and logarithms. Thankfully, we can benefit from a spreadsheet that performs these calaculations, created by John G. Cramer, Jr., a Professor Emeritus of Physics at the University of Washington in Seattle, Washington. It is Dr. Cramer’s spreadsheet that I used to calculate my bioage to be 44, 19 years below my chronological age of 63.

Their are nine blood-work values needed to determine your bio age for the DNAm PhenoAge calculation:

It’s common for your annual blood work prescribed by your doctor to include these blood markers, but as mentioned above, you can get them from Life Extension Foundation:

Up next is how these particular blood markers were determined to be sufficient inputs to do your BioAge Test. 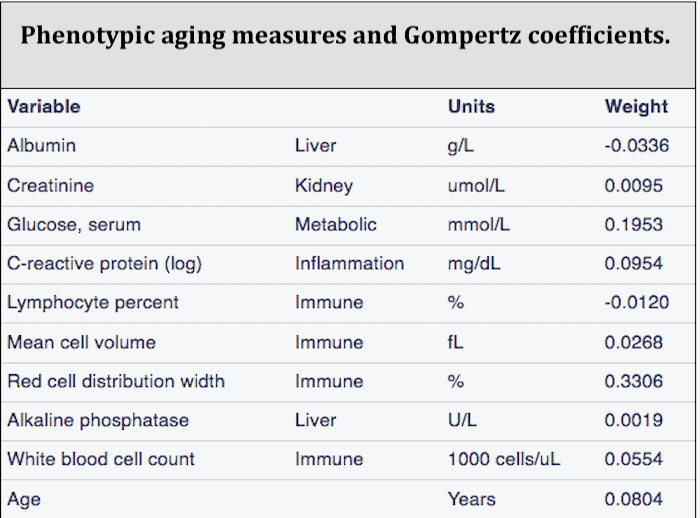 The coefficient values of this model can be found in the Supplememnt Section and Tables of the research paper. Predicted estimates from this model represent a person’s epigenetic age, referred to as “DNAm PhenoAge”.

In step 1, the researchers developed an estimate of “Phenotypic Age” based on clinical measurements. Phenotypic age was developed using the NHANES III as training data, which was narrowed down to nine biomarkers plus chronological age using a regression model. This measure was then validated in NHANES IV and shown to be a strong predictor of both morbidity (disease) and mortality (death) risk.

One potential biomarker that has gained significant interest in recent years is DNA methylation (DNAm). To understand DNAm, it’s helpful to learn a bit about DNA Methylation and Epigenetics.

DNA methylation is an epigenetic mechanism that often modifies the function of the genes and affecting gene expression through a process by which methyl groups are added to the DNA molecule. DNA a molecule carrying genetic instructions for the development, functioning, growth and reproduction of all known organisms and many viruses. A methyl group refers to a hydrocarbon group derived from methane. When located in a gene promoter (region of DNA that initiates transcription of a particular gene), DNA methylation typically acts to repress gene transcription.

Epigenetics is the study of heritable changes in gene expression (active versus inactive genes) that do not involve changes to the underlying DNA sequence — a change in phenotype without a change in genotype — which in turn affects how cells read the genes. Epigenetic change is a regular and natural occurrence, but can also be influenced by several factors including age, the environment/lifestyle, and disease state. Epigenetic modifications can manifest as commonly as the manner in which cells terminally differentiate to end up as skin cells, liver cells, brain cells, etc. Or, epigenetic change can have more damaging effects that can result in diseases like cancer [1].

Chronological time has been shown to elicit predictable methylation changes at many regions across the genome (the complete set of genes or genetic material present in a cell or organism) [2–6], and as a result, the first generation of DNAm based biomarkers of aging were developed to predict chronological age [7–12].

While the current epigenetic age estimators exhibit statistically significant associations with many age-related diseases and conditions13,26 [14–27], the effect sizes are typically small to moderate. One explanation is that using chronological age as the reference, by definition, may exclude CpGs ( whose methylation patterns don’t display strong time-dependent changes, but instead signal the departure of biological age from chronological age. Thus, it’s important to not only capture CpGs that display changes with chronological time, but also those that account for differences in risk and physiological status among individuals of the same chronological age.

Previous work by Levine et al and others have shown that “phenotypic aging measures” derived from clinical biomarkers [28–32] strongly predict differences in the risk of all-cause mortality, cause-specific mortality, physical functioning, cognitive performance measures, and facial aging among same-aged individuals. What’s more, in representative population data, some of these measures have been shown to be better indicators of remaining life expectancy than chronological age [28], suggesting that they may be approximating individual-level differences in biological aging rates. As a result, we hypothesize that a more powerful epigenetic biomarker of aging could be developed by replacing prediction of chronological age with prediction of a surrogate measure of “phenotypic age” that, in and of itself, differentiates morbidity and mortality risk among same-age individuals.

I recognize that this is heady stuff. I don’t fully understand it myself. What I do get, however, is that through comprehensive testing and refinement, gerontologist have been able to develop a model based on nine blood markers that can estimate your BioAge with a high degree of accuracy.

This information is valuable because it gives you some clarity about how well you’re aging, independent of how many years you’ve been alive, your chronological age. If you want to age slowly and thereby extend your healthspan if not lifespan, it’s tremendously helpful to know how you’re doing.

{See you on the inside.}