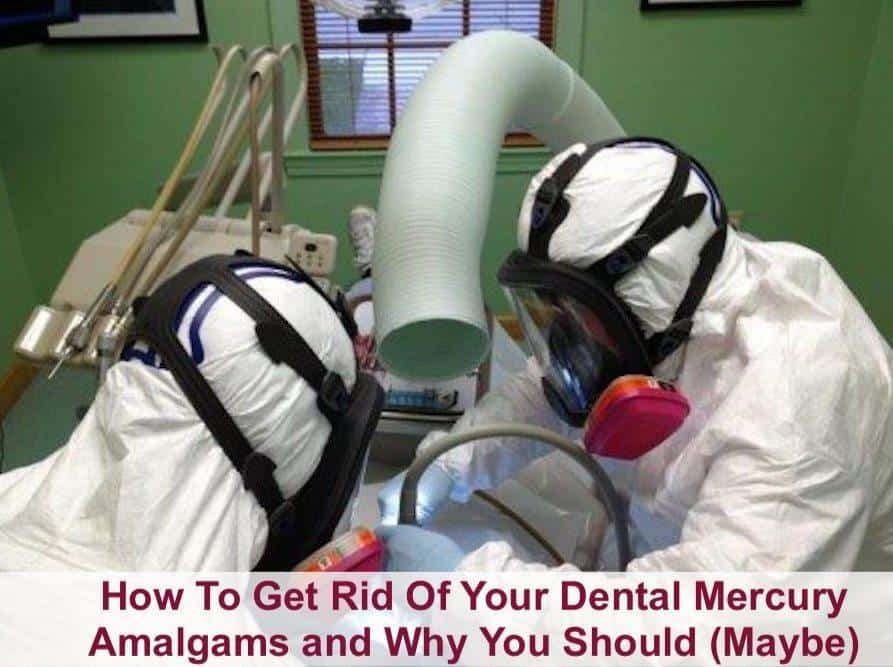 FINALLY, AFTER four decades my teeth are free of dental mercury amalgams.

“Not a problem,” many dentists say in the U.S. in response to the assertion that the mercury in those silver amalgams can damage your health.

The debate rages on, but I did something about all that shiny mercury in my mouth, and perhaps so should you.

According to the U.S. Food and Drug Administration (FDA), a dental amalgam is a dental filling

material used to fill cavities caused by tooth decay, in use for more than 150 years in hundreds of millions of patients around the world.

A dental amalgam is a mixture of metals: Liquid (elemental) mercury (50% by weight), and a powdered alloy composed of silver, tin, and copper.  The chemical properties of elemental mercury allow it to react with and bind together the silver/copper/tin alloy particles to form an amalgam.

Most people who have had cavities drilled out had amalgam fillings put in, particularly before various non-metal composite alternatives were available. If you were to pick a random person in the street and ask him/her to open wide, you’d see flashing silver metal — amalgam fillings.

In America, most dentists and dental organizations say that dental mercury amalgam filings are safe, durable, relatively cheap and should be used.

The FDA walks a fine line on this point, reporting that there is bioaccumulation risk (build-up or steadily increasing concentration of a chemical in organs or tissues in the body), but concludes:

“The weight of credible scientific evidence reviewed by FDA does not establish an association between dental amalgam use and adverse health effects in the general population.”

The American Dental Association says this about amalgam filings:

“Dental amalgam is considered a safe, affordable and durable material that has been used to restore the teeth of more than 100 million Americans. It contains a mixture of metals such as silver, copper and tin, in addition to mercury, which binds these components into a hard, stable and safe substance. Dental amalgam has been studied and reviewed extensively, and has established a record of safety and effectiveness.”

MYTH: Dental amalgam is the same as mercury, which seeps into your mouth and poses a significant health risk. FACT: Amalgam is not the same as mercury. There is mercury in amalgam, but not in pure form as it is bound in ‘intermetallic compounds’ of silver, tin and copper. Once the amalgam filling has set, there is no liquid mercury present, and it does not present a health risk.

So, What’s The Beef with Dental Mercury Amalgams? 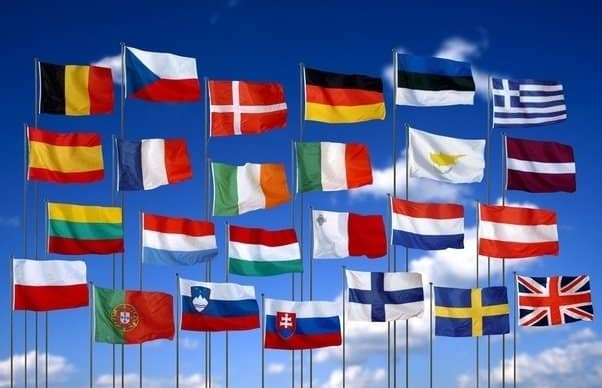 Click on any of the footnotes above to get the details for each topic.

Next, I’m going to summarize some of the scientific challenges to mercury-filled dental amalgam filings compiled by Dr, Case Adams, present a video showing off-gasing of the mercy in amalgam filings, review my experience about replacing amalgams with bio-compatibly materials, and present information about how to detox from mercury.

Should You Remove Your Dental Mercury Amalgams?

Naturopath Dr. Case Adams does a fine job weighing the pros and cons of removing dental amalgams in his article, Should We Remove Our Amalgam Dental Filings?

Here’s a summary of his research:

Dr. Adams concludes his review of the research by quoting a 2014 statement made by the International Academy of Oral Medicine and Toxicology, after a review of recent research on mercury responses among people with genetic differences:

These and other studies suggest that susceptibility to mercury toxicity differs among individuals based on multiple genes, not all of which have been identified. These studies further suggest that the levels of exposure to mercury vapor from dental amalgams may be unsafe for certain subpopulations. Moreover, a simple comparison of typical exposures versus regulatory safety standards suggests that many people receive unsafe exposures. Chronic mercury toxicity is especially insidious because symptoms are variable and nonspecific, diagnostic tests are often misunderstood, and treatments are speculative at best.

Thus, the relevant set of questions to ask yourself concerns your personal exposure to mercury and your capacity to clear it from your body.

Dr. Adams recommends that following five questions be considered in your … to extract your amalgam filings:

I want to stress that it could be stressful on your body if your mercury amalgams are not extracted properly, particularly if your body doesn’t effectively excrete mercury and/or you’re sick.

Dr. Adams points out in studies from Germany and Brazil, urinary levels of mercury after amalgam removal were between 30 and 50% higher than before the removal, although such levels returned to average levels experienced by unexposed people within a year.

Are Your Dental Mercury Amalgams Inert or Do They Off-gas and Enter Your Body?

I mentioned the off-gasing of mercury in amalgam filings. Here’s a video by David Kennedy, DDS that tells the tale:

Dr. Kennedy is showing mercury vapor coming off a 25 year-old’s amalgam filings in an extracted tooth. The background is a phosphorescent screen. The mercury vapor absorbs the fluorescent light, seen as a shadow on the screen.  If you can see it, as we can in the video, Dr. Kennedy says that means the mercury off-gasing is one thousand times higher than the Environmental Protection Agency allows for the air we breathe.

My Experience With Mercury Amalgams

I must have been a sugar-hungry kid, because by the time I was in my late teens, I had about eight big, shiny, silver mercury-laden amalgams in my teeth.

The literature on the topic suggests that decades of the amalgam metals swelling and contracting when I ate cold and hot food and drink eventually broke the teeth.

Could be. I don’t know. But given what the video above shows, under a fluorescent light my meals would have produced enough of a smoky light show to fill the room!

Frankly, I wasn’t sure if this exposure to mercury was affecting my health, but after reading that just about any ailment could be created or exacerbated by mercury toxicity, I wondering if the hard-to-lose chub clinging to my waist, my cold feet or intermittent bouts of fatigue were all connected to mercury exposure.

I got one of the best mercury tests available, the Quicksilver Mercury Test, which was highlighted in my article, Why You Have Mercury Toxicity and What To Do About It. My test results indicated that the mercury level retained in my body was low and that I excreted it effectively. And yet I still wondered to what extent was my every health ailment connected to mercury toxicity.

In my case, I didn’t need overwhelming evidence of the harm mercury amalgams might be doing to me. I needed to fix those broken teeth and I was going to get my amalgams removed at the same time.

In a moment I’m going to show you the before and after photos of my teeth, even though the “before” picture is embarrassing. But first, a bit on where I went for the procedure.

As before mentioned, there’s now a cottage industry of dentists dedicated to offering biocompatable materials for all your dental needs. They use no metals, and certainly no mercury. They’re called “Biological Dentists”.

Many follow a strict protocol for the removal of mercury-laden amalgams developed by a dentists named Hal Huggins. Appropriately, the protocol is called, The Huggins Protocol.

Dr. Huggins has argued that dental mercury amalgams can cause digestive problems such as Crohn’s disease and ulcers, mood disorders such as depression and fatigue, autoimmune diseases such as multiple sclerosis, scleroderma and lupus, high or low blood pressure, arthritis, tachycardia, mononucleosis, and cancers such as leukemia and Hodgkin’s disease.

Across the world, thousands of dentists use his protocol to remove amalgams and replace them with durable, biocompatible materials.

Which brings me to Mexico.

I looked around the San Francisco Bay area where I live to find a biological dentist to extract my amalgams. I found many of them. Estimated price: $15,000.

I did more research and found American Bio Dental in Tijuana, Mexico. This dental clinic practices the Huggins Protocol, is staffed by a cadre of caring, highly skilled and educated staff, and they did the job for $5,000. 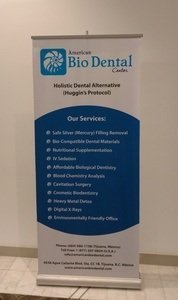 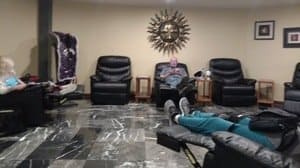 They even sent a van to pick me up and deliver me back to San Diego, which borders Tijuana.

Here are my before and after pics: 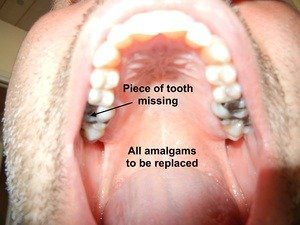 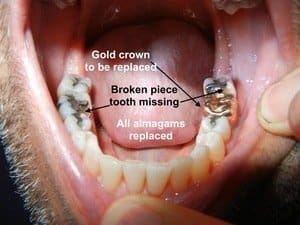 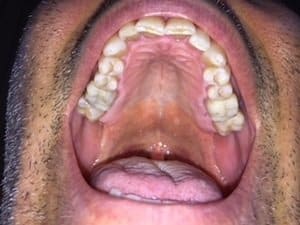 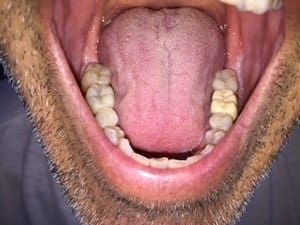 That off-colored tooth is a zirconia crown that replaced my gold crown. Didn’t want any metal in my mouth, even though gold is the most benign of metals that are used for crowns. I could have had the zirconia crown colored to match my other teeth — but didn’t bother given that it’s not observable unless I chew with my mouth open — and surely it’s a closer match than my gold crown.

How To Detoxify From Mercury

American Bio Dental and other Biological Dentists offer an array of IV-administered and oral supplements to help bind to and extract and/or improve your immune system. Typically, these include vitamin C, glutathione, n-acetyl carnitine, alpha lipoic acid, among others.

I elected for an intravenous solution of vitamin C at the dental clinic, but was also taking healthy doses of n-acetyl cysteine, R-lipoic acid, cilantro and chlorella. I experienced no ill effects from mercury detoxification.

But that’s not necessarily typical.

Whether it’s from the mercury amalgams in your teeth, food or environmental exposure, detoxing from mercury is a tricky proposition. If this is of interest to you, I recommend becoming familiar with Dr. Dietrich Kinghardt’s Heavy Metal Detoxification Protocol.

A quick rundown of the supplements and procedures for mercury detoxification similar to Dr. Kinghardt’s can be found on this site, which does a rundown on: