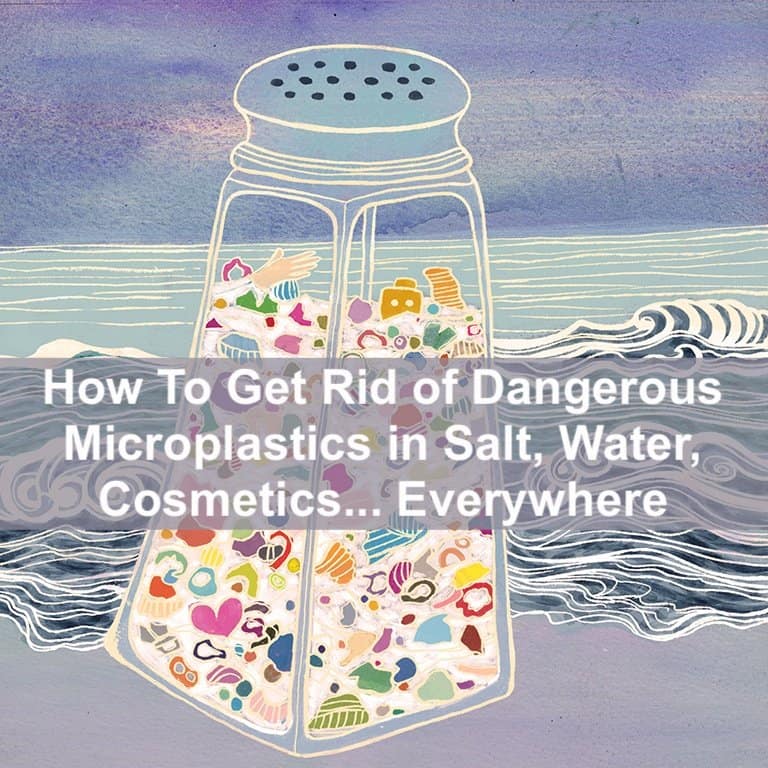 Microplastics are everywhere and they’re damaging more than just the planet. Microplastics in salt, drinking water, food, cosmetics and toothpaste mean they wind up in you. Find out what to do about it. [Watch]

THE WORLD produces eight million metric tons of plastic that winds up in the oceans. It degrades into tiny bits of plastic called microplastics. They’re everywhere. Microplastics in salt, drinking water, food, cosmetics and toothpaste mean they wind up in you. Find out what to do about it. [Watch] 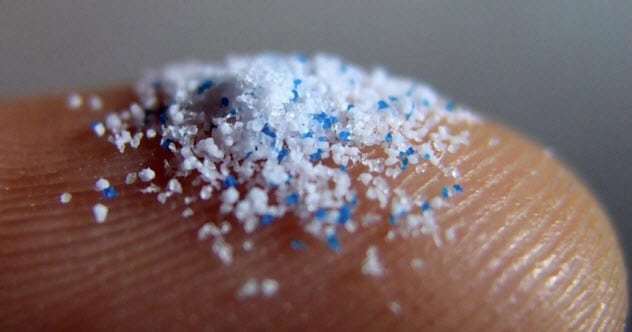 Microplastics are tiny bits of plastic, typically from polyethylene plastic. They are created intentionally and unintentionally.

The unintentional creation of microplastics occur from the degradation of larger pieces of plastics into bits so small they’re not visible to the eye. Such bits measure less than 5 millimeters (0.2 inches) in diameter.

Given that this world is choking on plastic, microplastics are everywhere — including in you!

Plastic is the most prevalent type of marine debris found in our ocean and Great Lakes.

In the most polluted places in the ocean, the mass of plastic exceeds the amount of plankton six times over (2)

Astoundingly, microplastics make up 94% of an estimated 1.8 trillion pieces of plastic in the “Patch” (3)

(1) This is a picture of the Great Garbage Patch of plastic: 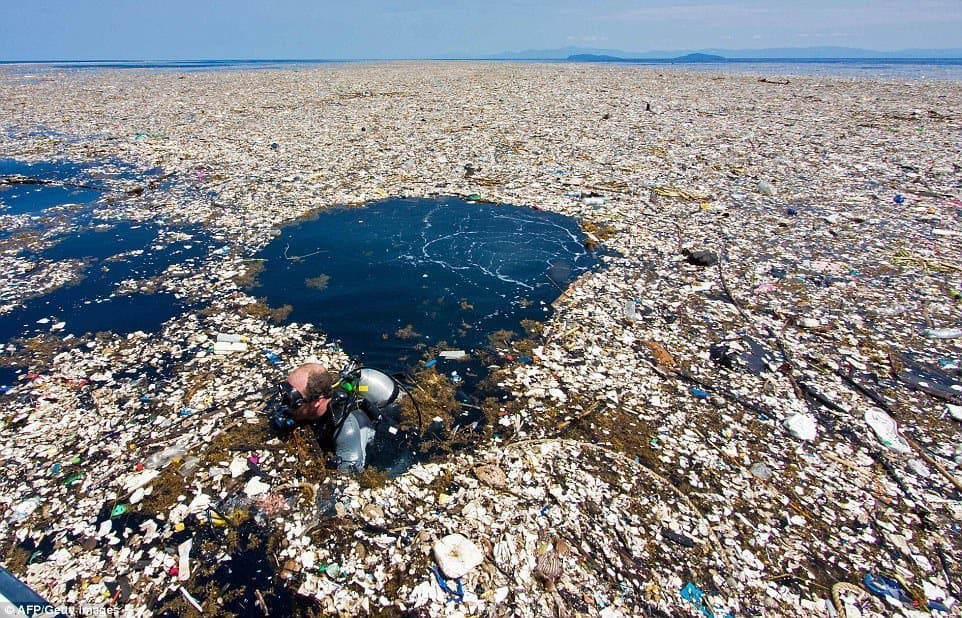 (2) This is a picture of where it’s located: 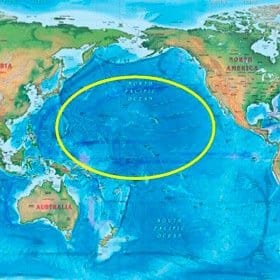 Apparently, the outlook is bleak. This graph projects that the total tonnage of plastics in the world’s oceans will get to 1,800 million tons by 2050: 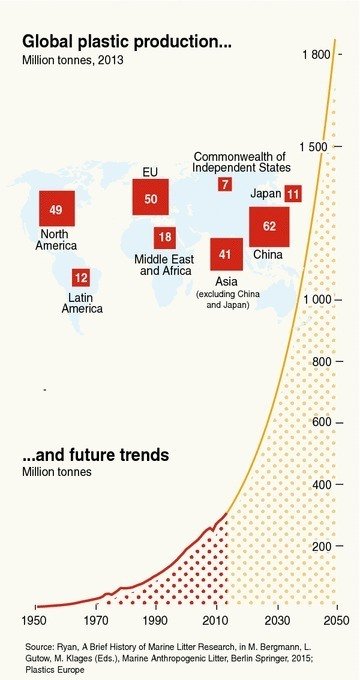 You use cosmetics or toothpaste, yes?

Then spend two minutes watching this:

A widely reported on story of late concerns the microplastics in salt. Many articles have summarized a National Geographic article, Microplastics found in 90 percent of table salt and a study entitled, Microplastics in Seafood and the Implications for Human Health.

The National Geo article reports that microplastics were found in 90% of the table salt brands sampled worldwide.

Adults ingest 2,000 pieces of plastic in table salt on average each year! (4)

Sea salt is made from the evaporation of seawater, rather than being extracted from sedimentary deposits. It’s used for culinary purposes, as well as in cosmetics. Some people believe it offers a fuller taste than regular salt due to its coarser texture and different rate of dissolution. Sea salt is common in many parts of the world and is growing in popularity.

Of 39 salt brands tested, 36 had microplastics in them, according to a new analysis by researchers in South Korea and Greenpeace East Asia. Using prior salt studies, this new effort is the first of its scale to look at the geographical spread of microplastics in table salt and their correlation to where plastic pollution is found in the environment.

Those 39 brands — which were not named — operate in one or more of 21 countries in Europe, North and South America, Africa, and Asia. Of these, 28 were sea salts, nine were rock salts, and two were lake salts.

Only three of the samples were microplastics-free:

Another salt free of microplastics is offered by Ava Jane’s Kitchen, called Colima Sea Salt. I haven’t tried it, but apparently it’s a coarse, unrefined, crunchy, moist sea salt that contains all the trace minerals our body needs.

In a report published last year (2017), The presence of microplastics in commercial salts from different countries, the most contaminated came from China. Chinese salt from different brands contained an average of 681 MPs per kilogram. As they say, “Buyer beware”.

Salt made in countries in Asia had by far the most microplastics of all the samples, which correlates with where plastic most often enters the ocean. Nine of the top 10 sea salts sampled with the highest amount of microplastics came from Asian countries. (6)

Microplastics In Your Tap and Bottled Water 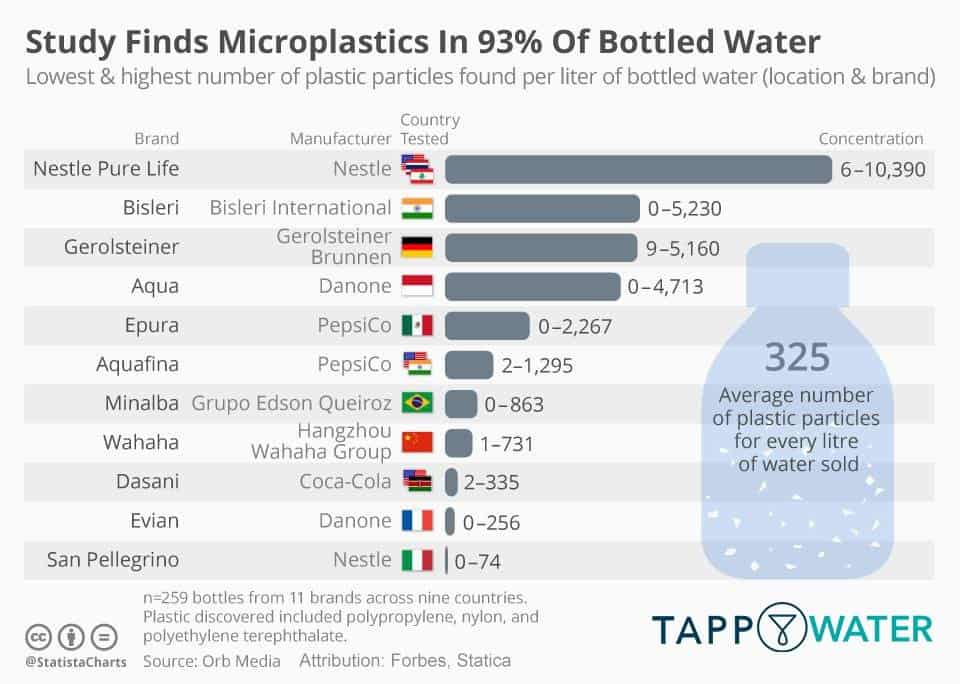 Microplastics in salt largely come from sea water, but there’s plenty in the water you drink as well no matter where you live.

According to The Guardian:

Tests show billions of people globally are drinking water contaminated by plastic particles, with 83% of samples found to be polluted.

Scores of tap water samples from more than a dozen nations were analyzed by scientists for an investigation by Orb Media, who shared the findings with the Guardian. Overall, 83% of water samples were contaminated with plastic fibers.

The US had the highest contamination rate, at 94%, with plastic fibers found in tap water sampled at sites including Congress buildings, the US Environmental Protection Agency’s headquarters and Trump Tower in New York. Lebanon and India had the next highest rates.

European nations including the UK, Germany and France had the lowest contamination rate, but at 72%, this should give little comfort to those living in Europe.

The average number of fibers found in each 500ml sample ranged from 4.8 in the US to 1.9 in Europe.

Tap Water Is Contaminated by Microplastic Throughout the World 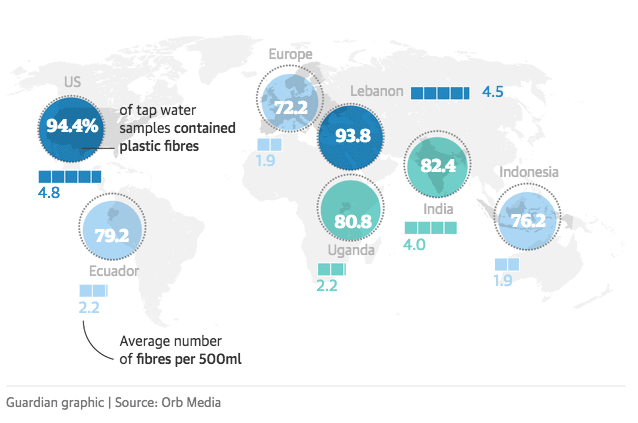 Microplastics in tap and bottled water are not regulated, so it is up to you to remove microplastics and other contaminants from your drinking water, which I’ll address below in “How You Can Purge Microplastics From Your Body”.

We’ve all seen those sad pictures and videos of various marine animals gulping down chunks of plastic or being entwined in it. That stuff is visible. What’s largely invisible is the microplastics ingested by plankton and on up the food chain, eventually to us. 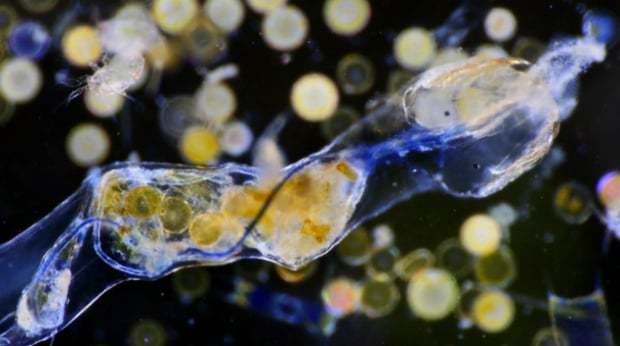 A Healthline.com article examining microplastics in food reports that: 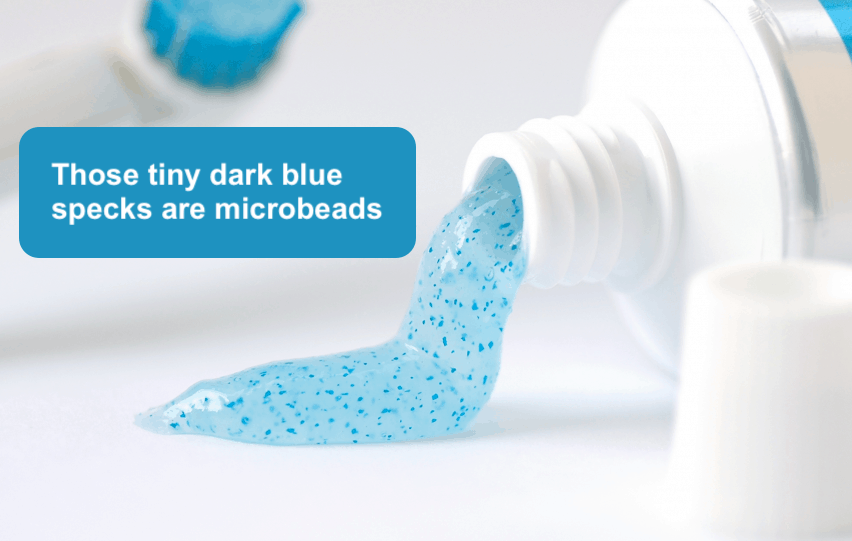 Yes, by now it might sound stranger than fiction, but microplastics in the form of microbeads are used in cosmetics and body care products as a cheap additive that helps to exfoliate and sanitize.

As reported by Paleohacks.com, they can be found in lotions, sanitizers, toothpastes, and body scrubs, as well as other products. Microbeads also add color and texture to cosmetic products such as bronzer, blush, lipstick, gloss, and highlighters.

A single tube of facial scrub can contain upwards of 300,000 microbeads. If you own multiple products that contain microbeads, you could easily have more than a million in your home at any given time.

The microbeads in cosmetics and personal care products are made of different types of plastic, which have deleterious effects on human health. These are synthetic polymers, such as polyethylene, PLA (polylactide or polylactic acid), polypropylene, polystyrene, and polyethylene terephthalate.

Like many types of plastics we routinely use — such as plastic water bottles — microplastics/microbeads can have hormone-disrupting effects on your body, most notably through increasing estrogen. Overall, the disruption to hormones caused by these plastics can result in problems with reproductive hormones, thyroid, infertility, and even an increased risk of developing certain types of cancer.

Before you buy cosmetics, lotions, body scrubs — even toothpaste — read the labels and look up the ingredients on EWG.org

How Microplastics Affect Your Health

Clearly, humans are exposed to plastics of all kinds; microplastic particles are found in our seafood and water supply, in the air we breathe and in the dust in our home. How much damage microparticles in marine, freshwater and land ecosystems has on human health still needs to be determined, for although a number of studies have shown there are microplastics and microbeads and plastic-derived chemicals of all kinds inside our body, the damage they do us is uncertain.

That said, there’s plenty to be concerned about.

Back to that Healthline article, which makes the following assertions:

(References in support of these statements may be found here.)

Undoubtedly, plastic-derived chemicals and a long list of heavy metals — such as mercury, aluminum and lead — bioaccumulate in our bodies, and over time can potentially present us with a toxic burden that can sicken us and contribute to chronic diseases. In this there are two key things to consider:

My article, How 212 Toxins In Your Body Make You Sick and Fat

Tapp Water: The Dangers of Microplastics In Drinking Water

Research study: Microplastics in Seafood and the Implications for Human Health

How Can You Purge Microplastics From Your Body?

Before “the purge” is addressed, let’s consider how to minimizing how much microplastics from salt, water or anywhere else they touch your life.

It’s a simple idea — don’t get microplastics into your body to begin with. The folks at Organic Lifestyle Magazine have a good list to consider.

Second — Purge the Plastic-derived Chemicals Inside Your Body

Carahealth has an excellent, detailed article on detoxification that I recommend you read. Yes, it can get wonky, but you’ll get a good sense about how our body detoxifies chemicals and heavy metals via our Phase I and II detoxification pathways.

What follows is Carahealth’s recommendation for detoxifying microplastics (which, by the way, will detoxify more than plastic stuff).  For details about how these foods and supplements work, read the Carahealth article.

Purge the plastics with these foods and supplements:

I would also add these to the mix:

Read my article, Time For Your Toxic Heavy Metals Detox, Step by Step. 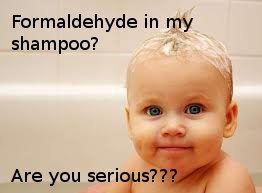 Give the kid a chance

Remember (and do) these four things to substantially reduce your microplastics burden:

Before you go, take a look at How To Detoxify Yourself and Why You Absolutely Must. 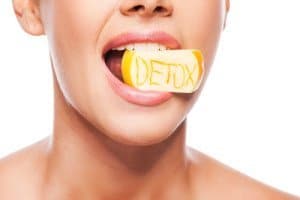