Get Biologically Younger With A Fast HIIT Feast-Famine Program

Increase your healthspan and get biologically younger with feast-famine regimen, plus high intensity interval training. 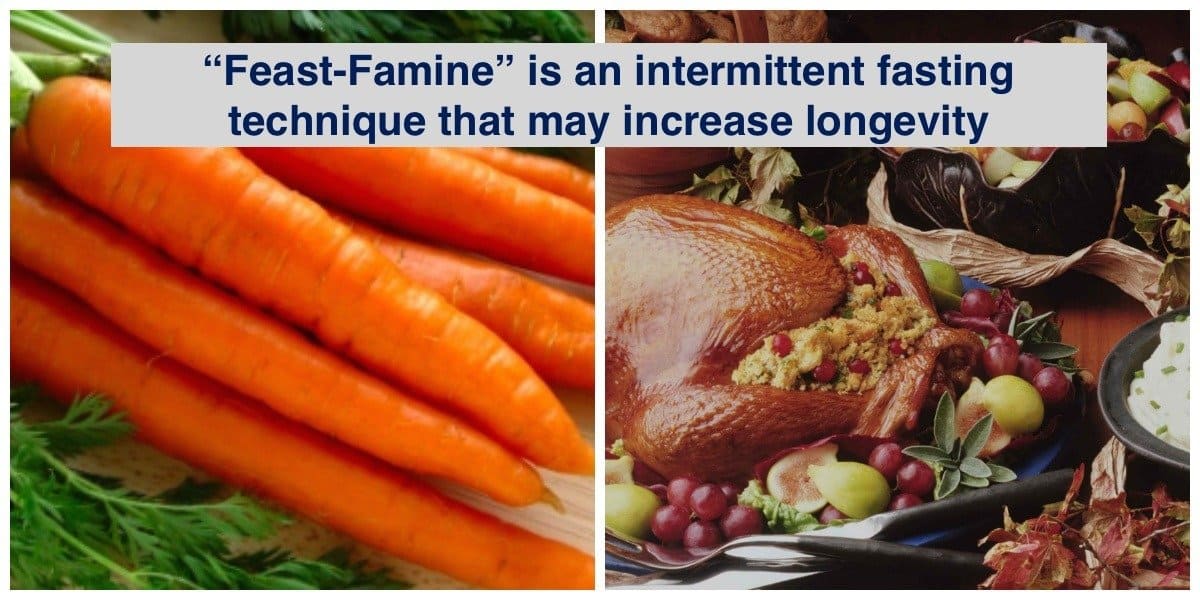 SOMETIMES WHEN I’m asked to characterize my career, I say it’s been “feast and famine”. That’s not a particularly good way to manage ones work life, but it turns out that it may be one of the best things you can do to reduce your biological age.

When you pair periods of feast-famine with a regular HIIT program, you’re bound to extend both your healthspan and lifespan.

The rest of this article endeavors to tell you why this is so, and how you can try it out yourself, but first, a few definitions are in order:

Now that we’ve cleared that up, get ready to find out how HIIT and Feast-Famine can increase your healthspan and lifespan by reducing your biological age.

If you search around for proven methods to improve longevity, you’ll inevitably bump into studies about caloric restriction. Long ago, scientists discovered that putting mice on a super-low-calorie diet extends their lifespans dramatically and combats age-related diseases.

Then they tried that out on primates, and the monkeys lived longer and healthier. That made the scientists happy, but surely they knew that actually getting humans to reduce their calories by around 30% — the amount necessary to achieve longevity benefits – was highly improbable, and therefore the search an easier Fountain of Youth continued.

When it comes to eating, the Feast-Famine regimen might be the fountain in which to bath one’s aging body in pursuit of youthfulness.

That’s what researchers at the University of Florida College of Medicine have said in a paper published in the journal Rejuvenation Research. There it’s reported that alternating between overeating and under-eating can provide some of the same longevity benefits that fasting offers.

Thanks to Dr. Dawson Church’s review of the study, we have a snapshot of how those Floridian scientist-types conducted the experiment:

Per Dr. Church, these were at least three important outcomes of the Feast/Fast experiment:

Let’s look at each result more closely, and then I’ll present my take on this particular intermittent fasting technique, “feast-famine”.

Although it was a relatively short experiment, the Feast/Famine experiment caused a slight increase in the SIRT3 gene activation.

The SIRT3 gene is activated by fasting because fasting induces oxidative stress within the body as it produces a surge in free radicals, which stimulates the SIRT3 gene to increase production of sirtuins.

Sirtuins are protective proteins associated with longevity. Various studies indicate that increased sirtuins extend the lifespans of mice. (1) I know you’re not a mouse, but this holds promise for we humanoids as well.

That sirtuins may extend lifespan due to SIRT3 genes activated by free radicals and oxidative stress challenges the free radical theory of aging, which basically says that much of aging is due to free radicals.

I guess we should define free radicals relative to their complicity in aging. According to Wikipedia:

“…organisms age because cells accumulate free radical damage over time. A free radical is any atom or molecule that has a single unpaired electron in an outer shell.”

When an atom or molecule isn’t paired, it becomes too unstable to exist in biological systems, like us, and over time damage accumulates leading to a range of disorders such as cancer, arthritis, atherosclerosis, Alzheimer’s disease, and diabetes. (2)

So, it makes sense to reason that extinguishing free radicals would be a good thing relative to longevity, but this gets tricky, because it turns out that some amount of free radicals are necessary to stimulate sirtuins and SIRT3.

And that’s not surprising.

The reason that some amount of free radicals may be beneficial is due to the principle of hormesis. This may explain why when participants in the study took vitamin C and E supplements, SIRT3 was suppressed, and some of the benefits of the intermittent fasting were counteracted.

Hormesis is a biological phenomenon whereby a beneficial effect (improved health, stress tolerance, growth or longevity) results from exposure to low doses of an agent that is otherwise toxic or lethal when given at higher doses. (3)

Actually, it doesn’t seem very phenomenal to me in the sense that it’s strange, or unusual, because we experience it all the time. Weight training exposes muscles to stresses that cause micro tears in their tissues, but that makes them stronger as the body responds to that damage by repairing and making the muscles stronger. Vaccines expose the body to the very disease they seek to immunify, but the dose is so small that it triggers and strengthens an immune response without overwhelming it.

Given that information, it might not seem unsurprising that the Feast-Famine researchers think that the rise in free radicals can actually be beneficial to us by triggering protective pathways.

Martin Wegman, one of the authors of the study said:

The hypothesis is that if the body is intermittently exposed to low levels of oxidative stress, it can build a better response to it. (4)

His co-author, Christiaan Leeuwenburgh, said that research indicates that supplements can counteract the effects of fasting, because:

You need some pain, some inflammation, some oxidative stress for some regeneration or repair. (4)

Now, given that these smart, educated and scientifically devoted researchers give evidence that vitamin supplementation might mess with hormesis and thereby interfere with your body’s innate capacity to get stronger by facing various stressors put upon it, you’d think that I’d reverse course and chuck my many supplements in the compost bin.

I’ll get to my reasons why I won’t right after we take a look at the effect of intermittent fasting on blood sugar.

Even if you avoid the sugary carbs that spike insulin levels in order to deal with the sugar assault spilling into the bloodstream, glucose (sugar) levels in the blood of the average person increases with age, and is thought to be a factor contributing to a decline in health as we get older, particularly if adult-onset diabetes happens.

In my article, Get More Sex and A Longer Life by Supercharging Your Blood, I present two graphs that, respectively, show male and female glucose levels relative to lifespan.

The graphs clearly show a correlation between age and blood sugar, in that – all other things being equal – the lower your blood sugar, the longer you live.

For those of you sufficiently uninspired to click the link to those graphs, I’ve copied and pasted them for you: 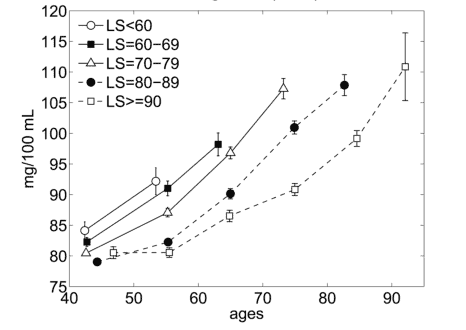 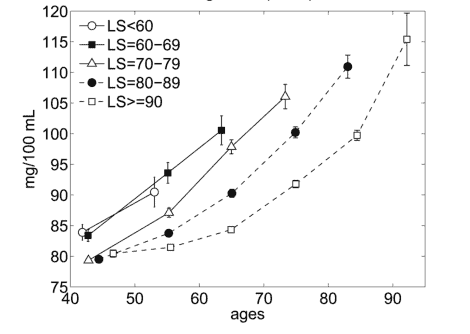 The Y axis (vertical line) shows blood glucose levels, and the X axis (horizontal line) shows age. As you can see by the lines in the graph, long-lived people have the lowest blood glucose level overall, even though it slowly increase with age in this population until approximately 55 years, whereupon it starts increasing more rapidly (steeper curve).

My Take On the Feast-Famine Study

Overall, the studies on intermittent fasting show that we can increase our healthspan and become biologically younger.

Which intermittent fasting technique can you do and sustain?

I routinely do two types of intermittent fasting:

These are what I can do, can sustain and have the health benefits I seek. That may be true for you, or perhaps the Feast-Famine technique will be more to your liking.

Experiment and then do what you can do long term.

And now to the idea of throwing away those vitamins that may mess with hormesis by drastically reducing or eliminating the oxidative stress and resulting free radicals needed to activate sirtuins and SIRT3.

Frankly, I’m a bit allergic to that idea for several reasons, but one will suffice:

It would near impossible to sufficiently repress oxidative stress and free radicals by consuming vitamin supplements. Therefore, I’m betting that there’s enough of both to stimulate sirtuins and SIRT3.

“High Intensity Interval Training” has been around at least as long as the Greeks first created the Olympics. Conceptually, it’s simple… all you do is a physical activity that will nearly exhaust you within, say, 10 to 60 seconds, followed by a rest period that is insufficient for you to recover entirely.

Thanks to Dr. Josh Axe for the rest of the information I’m about to share with you on this subject. In his post about HIIT, he underscored these anti-aging benefits of this type of exercise program:

Dr. Axe goes on to say that in addition to affecting DNA, the wide variety of anti-aging HIIT benefits include:

If you’re so inclined, you can dig deeper into this by reading three articles I’ve written about telomeres and HIIT; to wit:

HIIT It Hard for Your HGH Boost

My Take On HIIT

In addition to all I say in the above linked articles, these are some points for you to consider about formulating your own HIIT program:

Would you like to see Dr. Mercola coached through a HIIT workout?

He’s guided by exercise physiologist Phil Campbell, an expert on HIIT, in the video below, which appeared in Boost Your Human Growth Hormone In 20 Minutes!

The point of this article is to introduce you to two ways to increase your healthspan and reduce your biological age:

Assuming you already do some exercise, select and try out HIIT, keeping in mind “My Take On HIIT” above.

If you’re new to exercise, your HIIT is anything that makes you breathless in a time span of between 10 and 60 seconds. For you, it could be as simple as sitting on the floor and getting up quickly.

I’ll leave you with links to a book by Dr. Church and a HIIT program by Dr. Axe.

Dawson Church, PhD is the author of The Genie in Your Genes, hailed as a breakthrough in the field of epigenetics.