How Was His Illness Treated? 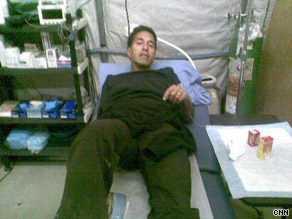 CNN’s Chief Medical Correspondent, Dr. Sanjay Gupta recently contracted H1NI, the so called (misnamed) “Swine Flu”, while on assignment in Afghanistan.  It was tough going for Dr. Gupta and his cameraman, Scottie McWhinnie, who also succumbed to this flu, but after a few days of wrenching coughs, shivers, fever and fatigue they recovered.   How?

Before I delve into that, it’s important to get some clarity about H1N1.

The term “Swine Flu” is inaccurate, as the strain of flu that might become a pandemic, is made up of several different components: swine is one, but also contained in the mix are avian strains.

The effect of H1N1 on a healthy human adult body is similar to the impact of a serious bout of the more familiar varieties of flu, as in the flu that seems to come knocking on your door each year.

In describing his H1N1 ordeal, Dr. Gupta says that he rarely gets sick, and yet he succumbed to this particular flu, H1N1, and in a place where, apparently, there was no H1N1-specific inoculations.  So doctors there treated him like almost any other flu patient: Tylenol and a sinus decongestant.

“Huh, that’s all”, you say.  Well, I said like “almost” any person with the flu because Dr. Gupta and his camera man got quite a bit more attention — they were also given IV fluids “given our inability to keep anything done”, he says.  If you’re at home and contract H1N1, even if healthy, this might become an issue.

So, given the World Health Organizations expectation of millions of infections this Fall and Winter, what should you do?

I’ve posted about the advice of Dr. Weil’s and others here.  What you should do is a function of who you are, as your age and health are important considerations.  Certainly, you can start now to build up your resistance with supplements for the immune system and various antioxidants. And if you hear that knock at the door, even faintly, I encourage you to take New Chapter’s Host Defense.

How Dreaded Covid Inflammation Is Intensified by Age and Chronic Illness