Can a pill make you younger? Elysium’s Nobel-winning scientists say theirs can.  Here’s a video and the story… 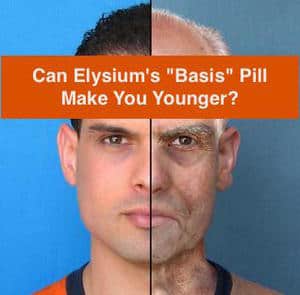 AN ARTICLE I recently read got me thinking about all the smart people and big money being devoted to inventing the ultimate anti-aging pill that can make you younger.

This is a momentous task because aging is not simply one thing that you can sequester and solve; rather it’s a multidimensional, inter-related, complicated symphony of degeneration.

Yes, I made that description up, but it’s spot on.

We “age” because our parts wear out, and they do that for many, many reasons, which is both beyond the scope of this article and my capacity to understand, let alone explain. (But if you want to see a list of 20 theories of aging, go here and scroll down a bit.)

Even if scientists succeed in creating a pharmaceutical that can delay or prevent aging for a bit, it will be expensive and perhaps inaccessible to many of us.

But there is something available right now that is promising. Can Elysium’s Pill Make You Younger?

Pay $60 for a one-month supply, or for $40 per month for a three-month subscription, and you can get a supplement that could do for you what they did in the lab for mice and worms.

In the lab, mice and worms live longer by ingesting certain ingredients, which are over-the-counter compounds that people can take to combat aging. The compound is believed to cause effects similar to a diet that is severely short on calories.

Dietary restriction is a proven way to make mice live longer, and Rhesus monkeys, too. Sharing 93% of their genome with humans (1), these monkeys are the species closest to us biologically that have undergone extensive calorie restriction studies to look at the impact on longevity.

Simply put, scientists pretty much agree that if even you, human person, can put up with about a 30% reduction in your caloric intake – as long is it’s pumped with nutrition – you may be able to live longer, and healthier.

So far, caloric restriction is the only proven way to predictably extend the lifespan of animals. But the hurdle to implementing this is that all animals, particularly we humans who make eating an art form, want to eat more, not less.

Given our predilection for more, not less food, scientists are trying to find a way to make a pill that will mimic the effects of calorie restriction, to make a pill, thereby, to make you younger.

Elysium says it’s got something that will do it. They call it Basis, about which they say:

Basis has two novel compounds. The first, nicotinamide riboside, is a precursor of the critical coenzyme NAD+, which is involved in metabolic processes such as energy production, DNA repair, cellular detoxification, the inflammatory response, and protein folding.

The second part is a new polyphenol compound, Pterostilbene, which like the NAD+ precursor, promotes metabolic health. The effects of both compounds have been scientifically validated in many laboratories.

You can source the ingredients found in Basis outside of Elysium Health, and that’s why I thought I’d be able to show you how to do this at less cost than what Elysium charges for it. But, hats off to them, Basis costs the same for a month’s supply as compared to other high quality brands, and $10 less per month for a three-month subscription.

Basis has 250 mgs of Nicotinamide Riboside and 50 mgs of Pterostilbene per serving. You could buy a high quality product like Niagen by High Performance Nutrition for $47, and Source Natural’s Pterostilbene for $14. Together, these would cost you a dollar more than the $60 for Basis. Even less if you were to buy a Basis subscription, as above mentioned.

Elysium’s study of human participants taking the recommended dose of BASIS, ™  increased their levels of  NAD+ from baseline in whole blood by an average of 40% at four weeks and maintained that increase for the duration of the trial. Participants taking double the recommended daily dose saw their NAD+ levels increase about 90% at four weeks with a much higher level of NAD+.

Read why I doubled my dosage here.

A Nod to Dr. Sinclair

Dr. David Sinclair, who was listed as one of Time Magazine’s 100 Most Influential People of 2014, and is a darling of the life extension proponents, discovered that Niagen might prolong lifespan. His research showed that the cellular age of mice could decrease from two years to six months after being given molecules of Nicotinamide Riboside.

(Niagin and Nicotinamide Riboside are pretty much two faces of the same coin, as far as I can figure.)

Think of it this way — mice that were two years old had the cells of six-month-old mice after being administered Nicotinamide Riboside!

Nicotinamide Riboside (“NR”) occurs naturally in beer and milk, but you couldn’t get enough of it by consuming those foods to improve metabolic efficiency and overall health, as are the claims for this supplement.

NR has been shown to boost NAD+ levels. NAD+ is a critical coenzyme (a nonprotein compound that is necessary for the functioning of an enzyme) found in all living cells. It plays a central role in key metabolic processes such as energy production, DNA repair, cellular detoxification, the inflammatory response and protein folding. And like a lot of things, NAD+ declines with age.

Now, on to Pterostilbene, the second and last ingredient in Basis.

Pterostilbene is a polyphenol shown to improve metabolic health in lab studies. Polyphenols are a class of antioxidants that form over 4,000 species, and are found naturally in blueberries and grapes.

Pterostilibene is similar to resveratrol, that grape “extract” found in red wine that has been heralded as a longevity promoter. Recent studies suggest that Pterostilibene is actually superior to Resveratrol, which might sadden Dr. Sinclair, as he also was one of a team of scientists who discovered that Resveratrol, a molecule in red wine, can “stick to this protein that controls ageing and make it more active”, he said.

I’m looking forward to making some room in my supplement budget so that I can begin trying Niagen and Pterostilibene, whether individually or the Basis brand. To my mind, if your aim is to bend the age curve (it’s shown in this article), then Niagen should play a role, and probably Pterostilibene as well, particularly if it’s superior to Resveratrol.

UPDATE 2/12/18: I’ve taken Basis for more than two years, and am happy to report that I’m still alive. Truthfully, I feel great, don’t get sick and can still exercise with wild abandon, but I can’t pinpoint just one thing I’m doing that’s responsible for this. I’m going 12 things that are responsible for how well I’m aging, the Basis supplement among them.

Everyone who makes a supplement has good story about it. Given that no one wants to spend a fortune on taking hundreds of pills each day (well, other than Ray Kurzweil), we need to be smart about what we consume, and that means checking to see if the science backs the claims.

Those of you who are undeterred by science-speak can go to PubMed.gov and search to see if the supplement (or drug) you’re considering has been studied relative to your expectation.

As of five minutes ago, PubMed displayed 134 studies on “Nicotinamide Riboside”. Go check it out.

For those of you who like plain English, there are websites devoted to truth-telling when it comes to what supplements actually can and can not do. Examine.com comes to mind.

I reviewed Examine.com right here. They produce various reports that can save you a lot of time and money, and have hundreds of supplement evaluations on their site that you can read for nada.

When it comes to Niagen and Pterostilibene, I think the scientific studies – although not conclusive – suggest that these supplements might have a beneficial effect at making us biologically younger, as happened with our mousey friends, whose 30,000 genes have a 99% direct counterpart in humans. (2)

That’s not as good as those Rhesus monkeys that share 93% of their genome with humans, but its a good reason that mice experiment results often parallel what happens with humans.

Prohealth no longer sells the Basis competitor made from the NAD+ precursor Nicotinamide Riboside, so stick with Basis for now, unless you prefer the NMN precursor.

(I receive an affiliate fee if you buy Basis linked from this page, but you don’t pay more.)

P.P.S  Read about two common drugs that may be repurposed for anti-aging,  Rapamycin and Metformin, and if you get on the List I’ll send you the book I’m writing, The Ageproof Method. For that, click here.