Dr. Mark Hyman calls it an epidemic. Blood sugar that’s out of control is turning the people of this nation into pre-diabetics, most having no clue that they’re on the path to becoming diabetic. Is it possible, that despite all the healthy things I do, that I’m on that path too?  Are you?? Watch! 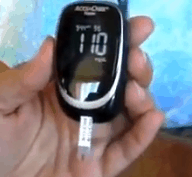 A BIT over a year ago, I got my blood tested. A buddy of mine had been taking a bio-identical testosterone medication prescribed by his doctor, and I observed him gradually go from being a bit listless to an energetic mojo-pumped happy sorta guy. I knew from my readings on the topic that most men begin to lose testosterone soon after 30.

Thirty was a long time ago.

I went to the Life Extension Foundation (“LEF”) website and purchased their Male Hormone Blood Test Panel, got my blood drawn, received the lab report and reviewed the results on the phone with a LEF doctor.

I wrote about this in a post entitled, Boost Your Testosterone Naturally. Yes, “naturally”, because, indeed, my testosterone numbers were low and I wanted to try boost them through supplementation, extra weight-bearing exercise and ingesting more protein, rather than by some testosterone patch, cream or injections.

About a month ago, in August, I again got my blood analyzed, but this time I included a very comprehensive cholesterol-oriented test offered by LEF called VAP. To say that my results from these tests were eye opening is like saying that Mt. Everest is a molehill.

I’ll have plenty to report about these tests in the future; in fact, this post will begin a series of posts on the subject of knowing your blood numbers, and responding accordingly.

Today, I open the series with an exploration of the very first test result shown on the Lab Results printout from LEF, “Glucose, Serum”:

That pic above is a screen shot from my blood test report. It shows a Glucose, Serum result of 100 mg/dl (milligrams per deciliter), which is “flagged” as “High” given that 100 is above the “Reference Interval” of “65 – 99”.

Glucose, Serum is a test that measures the amount of a sugar called glucose in a sample of your blood. Glucose is a major source of energy for most cells of the body, including those in the brain.

Carbohydrates, which are abundant in fruit, cereal, bread, pasta, and rice, are quickly turned into glucose in your body, which then raises your blood glucose level.

Over time, too many carbs too often can impede your insulin’s ability to remove excess glucose from the blood, a potential problem, as any diabetic can tell you.

From the Mayo Clinic:

“The main job of insulin is to keep the level of sugar in the bloodstream within a normal range. After you eat, carbohydrates break down into sugar and enter the bloodstream in the form of glucose, a sugar that serves as a primary source of energy. Normally, the pancreas responds by producing insulin, which allows sugar to enter the tissues.

When your body does not produce sufficient insulin or has become resistant to insulin, the blood sugar level in your body increases because it is unable to enter the cells.

Some sources say that a blood sugar level of 100 is within acceptable limits, and others, like LEF, say it’s of concern.

As psychologists would term it, I’m having “cognitive dissonance”; meaning, a blood sugar level of 100 doesn’t fit with my perception of what should be true.

According to the LEF’s Symptoms and Diagnosis of Diabetes:

My number on the LEF test is 100. More alarming, as the video below shows, a self-administered test using implements designed for diabetics showed my fasting blood sugar number to be 110 this morning.
Did I mention that I’m not happy about this?

Well, in a nutshell here’s what I’m going to do:

– Get on a supplement protocol designed to improve blood sugar control
– Regularly take and monitor blood sugar measurements (see video below)
– If there’s no improvement, see a doctor

Notice that one common intervention for this issue isn’t mentioned. I’m referring to diet. I didn’t list “improving my diet” or some such thing, because at the moment I don’t know how I’d make it better relative to improving my blood sugar.

When it comes to diet, the only thing I wonder about is if my recent practice of intermittent fasting could affect blood sugar negatively.

In my practice of intermittent fasting, I ingest very few calories from 8:30 PM till 1:30 PM the next day. From 8:30 PM till arising, I typically only consume water or tea. Within one-half hour of arising, I ingest about 30 grams of protein powder mixed with water, and one heaping tablespoon of flax seed powder, together about 150 calories.

I also have been experimenting with so-called “Bulletproof Coffee”, basically coconut oil blended with high quality coffee (I abstain from the butter), which add another 150 calories from the heaping tablespoon of the coconut oil, for a total of 300 calories ingested from morning till 1:30 PM.

Could this be the reason for my high blood sugar? Doesn’t seem likely, but I’m going to find out.

LEF suggests a long list of supplements to control/improve blood sugar.  So happens, I already take many of them.  Here are those I’ll add to the mix:

Let me underscore that this selection DOES NOT reflect my interpretation of the best supplements to take among the LEF list of suggestions. As mentioned, I already take most of what they suggest, such as:

The method I’ll use for monitoring my blood sugar is presented in the video below.

I’ll seek to get my normal fasting blood sugar level to between 70 and 90 mg/dl.

According to this article, doctors consider any fasting blood sugar between 70 mg/dl and 100 mg/dl to be normal, but several studies suggest that people whose fasting blood sugar is over 92 mg/dl are more likely to be diagnosed with diabetes over the next decade. So, I will not be content with a modest decrease from my 100 LEF score, or 110 self-administered test results.

My blood sugar monitoring will also include non-fasting measurements taken two hours after lunch and dinner, as well as after exercise.

Normal post-meal blood sugar (referred to as “postprandial”) numbers should range from under 120 mg/dl one or two hours after a meal, with most normal people less than 100 mg/dl two hours after eating. (Source)

I’ll end this post with the aforementioned video showing how I intend to monitor my blood sugar. Stay tune for updates on this subject and for more posts about the other unsavory results from last months LEF blood tests.

Here are blood sugar numbers to guide you: