Two scientists study the latest popular diets and conclude that the best diet consists of “real food”. How surprising. Here’s the details… 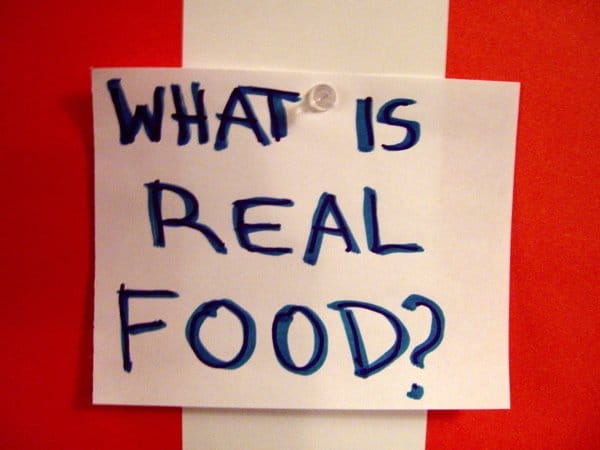 BLOG READERS like to scan and not read line by line, so I’m going to cater to my audience and give you the bottom line.

The best diet verified by science is composed of “real” food.

Yep, that’s it.  You can now move onto something else.

For those whose appetite are whetted, proceed.

The “real “food that a scientific study of today’s common diets say is the best diet looks pretty much as it did on the farm upon which it was grown.

What it’s not is the stuff that typically dominates the center part of grocery stores, as well as most pantries, kitchen cabinets and refrigerators.

In other words, it’s not the stuff in boxes, cans and jars.  Yes, most of that packaged stuff was grown on farms, but then it was delivered to some food manufacturing plant. There it was processed – perhaps some fat squeezed out and sugar and salt put in, or some derivative part of it extracted, enhanced and made into a Franken food like Captain Crunch cereal.  Then it was put into attractive packaging, and the former-food was driven a thousand miles so it could sit for an indeterminable time on a grocery shelf nearby awaiting purchase by you.

Grandma coulda told you that the best diet is the one consisting of real food, and although this may seem implicitly true to you, too, it did take an extensive scientific comparison of the major diets competing for your patronage these days to come up with the “discovery” of the winner.

The reason this is important is because your diet is among the most critical influences on your health. Poor diets figure among the leading causes of premature death and chronic disease. In contrast, optimal eating is associated with increased life expectancy, dramatic reduction in lifetime risk of all chronic disease, and amelioration of gene expression.

But maybe it’s more believable when researchers with the reputations of Dr. David Katz and Stephanie Meller tell you that the best diet is real food. They’re the scientists that did the digging and published their results in a paper titled Can We Say What Diet Is Best for Health?

Despite all claims to the contrary, Katz and Meller discovered:

“There have been no rigorous, long-term studies comparing contenders for best diet laurels using methodology that precludes bias and [confusion]. For many reasons, such studies are unlikely.” (Source)

“… such studies are unlikely” they wrote because typically diet-promoters have a “dog in the fight”; meaning, their biased given some beneficial association with a particular diet.

Unencumbered by any such association or preconception, Katz and Meller went to work and compared these now popular diets:

The diets are represented in this table:

“A diet of minimally processed foods close to nature, predominantly plants, is decisively associated with health promotion and disease prevention and is consistent with the salient components of seemingly distinct dietary approaches”. (Source)

To reiterate… the common denominator across any diet you may care to indulge – the one characteristic it should have to support your health – is that a food manufacturer has not adulterated the food in your diet, and that it’s replete with plants.

Plant-based diets that are “nutritionally-replete” are supported by many favorable health outcomes, such as less heart disease and fewer cancers – these being, respectively, the number one and two killers in America.

Ideally a plant-dominant diet should include not just fruits and veggies, they say, but whole grains, nuts and seeds. If this is even a wee bit convincing, do yourself a favor and pile into Dr. Greger’s videos at Nutritionfacts.org.

The Mediterranean diet has higher fat content that the typical vegetarian/vegan diet, but the researchers found no decisive evidence that low-fat is better than high fat, as long as the fat source is healthy.

That means no trans fat, rancid oils or an unhealthy ratio of omega-3 (polyunsaturated) to omega-6 (unsaturated) fatty acids.

The typical American diet favors too much omega-6 oils, which are unsaturated fatty acids, such as most vegetable oils: olive canola, sunflower, safflower, soybean oils, etc.   These need to be balanced by the consumption of more omega-3 fatty acids, such as fish oils, krill oil, chia seed, flax seed, etc. (Source)

[Read Chris Kresser’s How Too Much Omega-6 and Not Enough Omega-3 Is Making Us Sick.]

Along with its relatively higher healthy fat content, the Mediterranean diet is defined by its high fiber content, moderate alcohol and meat intake, antioxidants, and polyphenols.

It does have favorable effects on heart disease, cancer risk, obesity, metabolic syndrome, and “is potentially associated with defense against neurodegenerative disease and preservation of cognitive function, reduced inflammation, and defense against asthma.” (Source)

Katz and Meller found that carbohydrate-selective diets are better than categorically low-carbohydrate diets. This is because the low-carb diets typically cut, or substantially reduce the consumption of whole grains that they report is associated with lower risks for cancers and better control of body weight.

OK, but know this: Attention to glycemic load and index is an important distinction, about which Katz and Meller agree.

Glycemic “index” refers to how fast a food spikes your glucose levels when eaten.  Sugar has a high index number because it quickly spikes glucose, thus requiring a corresponding reaction from insulin to shuttle the sugar from the blood into the cells to use as energy, or to fat if this extra energy is not needed.

More important than the glycemic index, though is the glycemic “load”.  The load measures how much of the carbohydrate you’re eating. Some high glycemic index foods, like carrots, have a low load because you won’t eat enough of them to be unhealthy, and normal portions are healthy.

Yes, it is the rage, and some very smart people extol the Paleo Diet’s benefits. The idea is to eat like a caveman so all you’re food is natural and bypasses food manufacturer’s tweaks.

If a caveman didn’t eat it, you shouldn’t.

Paleo detractors — not bereft of brainpower themselves — assert that a diet dominated by meat is very unhealthy, as it’s tied to a host of degenerative diseases.

[Read What You Need To Know About Coffee, Saturated Fat And Meat.]

“If Paleolithic eating is loosely interpreted to mean a diet based mostly on meat, no meaningful interpretation of health effects is possible.” (Source)

That’s a summarily dismissal of the possibility of health benefits accruing from a meat-dominant diet.

They note that the composition of most meat in today’s food supply is not like that of mammoth meat, and that most plants available during the Stone Age are today extinct.

Paleo adherents would probably counter that assertion by saying, “Yeah, well you must eat pasteurized, grass-fed meat only, and organic vegetables.”

The Paleo debate rages on, so let’s turn the page.

[Those still on the page, watch Steve Hammersly and I make a Paleo meal.]

No, NuVal is not a diet, but a way of determining if the food in yours is worth eating.

Dr. Katz is supportive of the famous quote by foodie and journalist Michale Pollan, who said,

“Eat food, not too much, mostly plants”,

but thinks such advice is insufficient to guide a person through the complex labyrinth that is the modern America supermarket.

So he developed NuVal, a single numeric value to determine foods’ worth, as opposed to what some consider is a complex nutritional label placed on the packaging of most foods.

I think that NuVal is interesting and worth knowing about, but I’m going to continue blithely on, guided by my forthcoming “conclusions”.

Dr. Katz’s conclusion is to eat “real food”, know its NuVal score, and eat only the foods with the highest score.

My conclusion is more expository:

1. Eat food that looks like it just came off the farm, basically.

2. Eat very little of the carbs that boost blood sugar, which means you need to get a sense for their glycemic load and index.  Simple clue – the more processed, the higher the index.

4. If you eat meat, get it from animals raised on grassy pastures.  Yes, it’s more expensive, so eat less of it.

5. By volume, eat more veggies than any other single food source.

6.  Drink more pure water – most of us drink too little of it.

P.P.S  Check out these guidelines from RealFoodCentral.com