The Best 2 NAD Precursors To Extend Your Healthspan

The two best NAD precursors are two molecules; one called NMN and the other NR. There’s a debate about which better converts into NAD, thereby keeping it at healthy, youthful levels. This is a very important objective if your aim is to extend your healthspan (perhaps even your lifespan) due to NAD’s role in activating a family of proteins called sirtuins, our longevity genes. 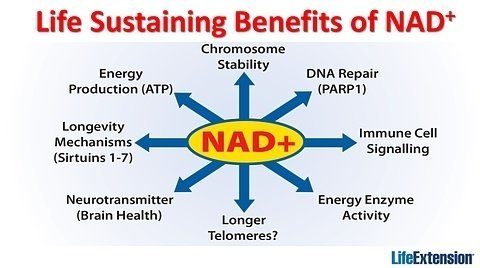 NAD is a coenzyme that no living thing can survive without. This “helper molecule” (often referred to as “NAD+” to denote the oxidized form) exists inside each of our cells and is essential in the production of energy, in particular the Krebs cycle, which produces energy. NAD also works throughout the body to support mitochondrial function and cellular respiration.

There are at least eight life-sustaining benefits derived from NAD:

But there’s a problem with NAD, which is problematic for us. Take a look: 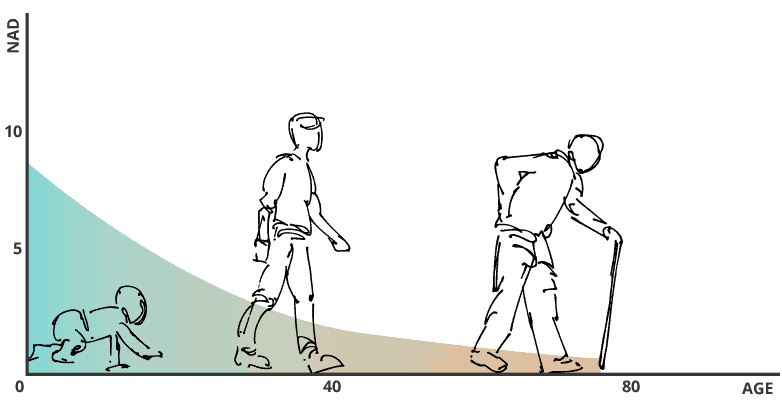 The older we get, the less NAD is produced in our body. By age 50, you may have only half the NAD as you did in your twenties. By age 80, NAD levels drop to only 1 to 10% expressed when young. (1) This really stinks, because the older we get, the more NAD we need but the less we have.

Given that NAD is essential for a robust life, and that it declines precipitously as we age, the natural question is:

How can we increase NAD production in our body?

You must consume the raw material that can make NAD. 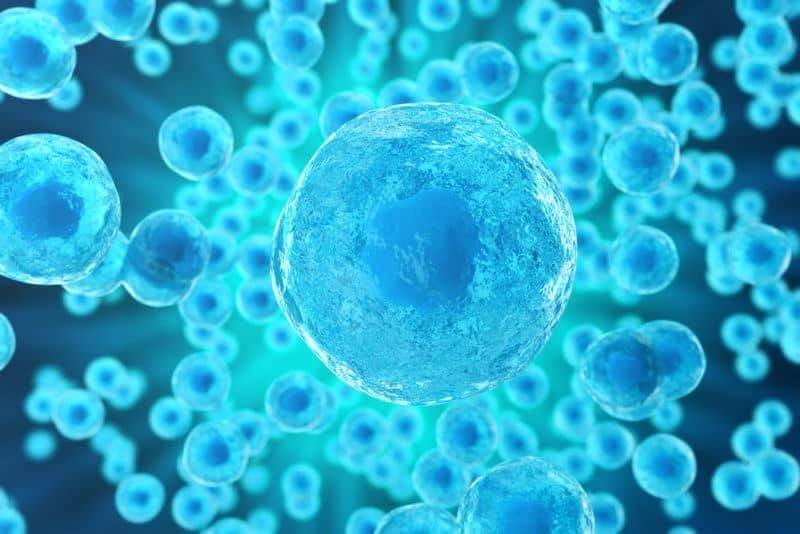 The body’s function in making and maintaining NAD begins with your cells taking certain raw materials — in this case a specific set of molecules that are NAD precursors — which go through a series of chemical transformations that turn them into NAD.  There are several ways NAD can be made.

NAD precursors are the raw materials from which your body makes NAD. Each NAD precursor follows a pathway made up of steps that chemically convert the precursors to NAD. Some pathways are thought to be more efficient than others, some provide more NAD, some provide less, but all of them lead to the same thing: more NAD.

This is where those two other acronyms come into play, as they represent two molecules that act as NAD precursors; meaning, that NAD can be synthesized (made) by NMN and NR, the two most popular precursors.

NMN stands for Nicotinamide Mononucleotide and NR is short for Nicotinamide Riboside. They are both molecules that act as precursors to NAD, meaning that they become NAD through a series of chemical transformations, thereby increasing its level in the body. NMN is similar to NR, the basic difference being that it has an extra molecule attached — a phosphate. In the case of NR, NAD has been increased in both human and mouse studies, and NMN has boosted NAD in mouse studies. (Human trials are underway for NMN, but have not yet been finished.)

Scientific studies of mice demonstrate that the NMN and NR NAD precursors not only increase NAD, but also reduce the biological age of the mice (they become younger than their chronological age). (2) The very few human trials on NR show that it boosts NAD levels in us, but it’s uncertain if this confers similar anti-aging benefits that accrue to mice. (3)  NMN is undergoing human trials now, but the results have not been published. (4)  Most scientists who study NMN, such as Dr. David Sinclair and Dr. Shin-ichiro Imai, are confident that NMN, like NR, does increase NAD levels in humans.

NAD Precursors Are Available Without Prescription

Both NAD precursors can be purchased without prescription as a supplement and are considered safe. Thousands of people supplement with both NMN and NR, me included.

I’m partial to the NMN brands offered by ProHealth Longevity offer because their NMN is pure, is sourced from the same place that supplies the NMN that Dr. David Sinclair at Harvard University and his family consume, and — disclaimer — I consult for the company and feel good about the products they offer.

When it comes to NR, I move from the Tru Niagen brand to Basis, the original NR supplement offered by Elysium Health.

My NAD Precursors and Dose:

This gives me one gram of two of the best NAD precursors (500 mgs each), along with pterostilbene, which (along with resveratrol, also in Pterostilbene Supreme) is a known activator (as is NAD) of sirtuins, often referred to as the “longevity genes”.

Note: A typical dose is 250 mgs per day of either NMN or NR, or 125 mgs of each; however, at one gram I’m following the dose taken by Dr. Sinclair and his family, and by Dr. Peter Attia. The difference is that Dr. Sinclair just uses NMN, not NR, and I’m unsure about Dr. Attia. 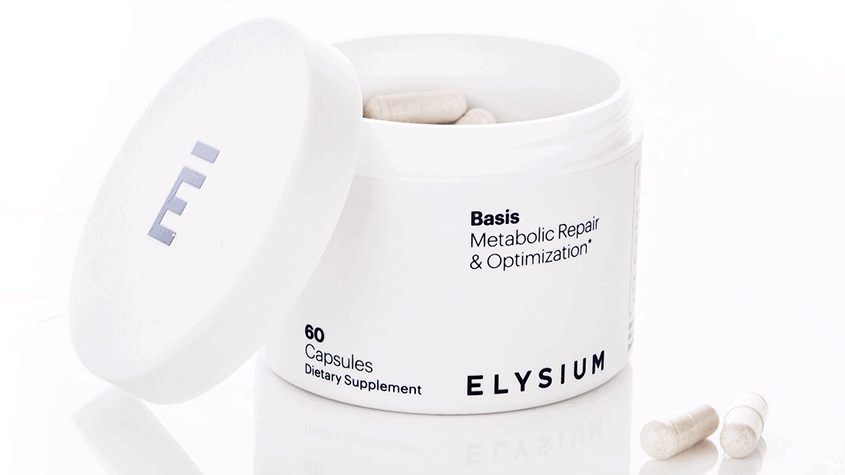 The simple reason I take both NMN and NR is that I by step the debate about which is a better NAD precursor. 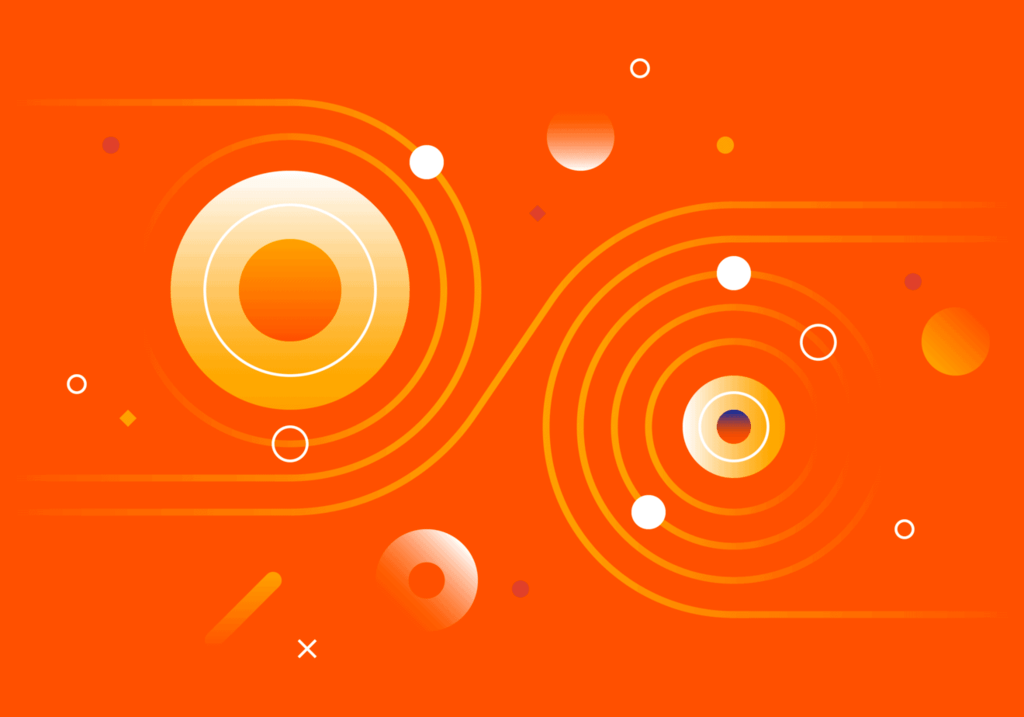 The makers of NMN and NR claim that their NAD precursor is better at converting into NAD, and there are studies to support both perspectives (shocking!).  A 2016 study that mapped the NMN and NR conversion path to become NAD made a conclusion that is no longer accurate:

NMN converts to NR, which then enters the cell for NAD+ synthesis. There is no signs of a direct NMN transport path into the cell.

One big reason it was thought that NMN needed to convert to NR in order to enter cells was due to the size of the NMN molecule; it’s too big to enter cells easily, was the reasoning, given that it has that extra phosphate molecule attached that NR does not. Hence, until earlier this year (2019), much of the scientific community thought that NMN can not directly enter the cells of most tissues to boost NAD (NAD synthesis). But then a new study published in Nature Metabolism in 2019 discovered a new pathway for NMN to directly enter cells — no conversion to NR needed. 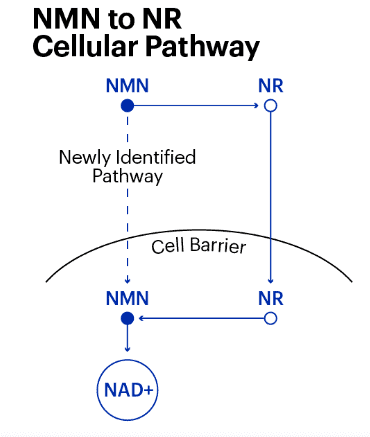 Arm wrestling over whether NMN or NR is the better NAD precursor for humans will not result in a winner until the two molecules are studied side by side in humans. Until then we can make some observations.

As mentioned, the most salient difference between NMN and NR is molecular size. NMN is larger than NR, and thereby was thought to need to be broken down to fit into the cell. Now that a new “transporter” mechanism was discovered earlier this year and was shown to be able to shuttle NMN directly into some cells, molecule size is no longer a viable comparative distinction that favors NR.

Dr. Shin-ichiro Imai is a professor of developmental biology at Washington University in St. Louis, and was the lead researcher in that 2019 study that identified a transporter that allows NMN to get into the cell without converting to NR. He and Dr. David Sinclair (they’re among the top NMN researchers in the world) were postdoctoral students under Dr. Leonard Guarente, perhaps the most well known NR researcher and the founder of Elysium Health, the maker of a NR product called Basis. NR has been shown to enter cells in the liver, muscle, and brain tissue of mouse models. But again, the two have never been matched up against each other in a way that can truly identify one as superior to the other relative to NAD precursors.

Why Should You Care About NMN and NR (The Story of Sirtuins)?

Why does it matter that these two molecules get into your cells and how do they do it, you wonder?

It matters because NMN and NR will increase your NAD, which then helps with those eight healthspan, if not lifespan, enhancements I listed above. It matters because when you have sufficient levels of NAD, your surtins are activated, a set of proteins that regulate longevity. Turns out, that’s a big deal.

Sirtuins are a family of proteins that play a role in aging by regulating cellular health. They’re responsible for critical biological functions like DNA expression and many aspects of aging. However, sirtuins can only function in the presence of NAD+, nicotinamide adenine dinucleotide, which as mentioned, is a coenzyme found in all living cells. (5)

When you think of proteins you might think of an important macronutrient that we need in our diet along with fats and carbohydrates, but in this case I’m referring to molecules called proteins, which work throughout the body’s cells in a number of different functions. Concerning sirtuin proteins, Elysium Health uses an office analogy to explain how they work.

In this analogy, the proteins are the departments at a company, each one focusing on its own specific function while coordinating with other departments. Your body’s cells are the office. In the office, there are many people working on various tasks performed to fulfill the mission of the company as efficiently and durably as possible. Just as priorities in the company change due to various internal and external factors, so do priorities in the cells. Someone has to run the office, regulating what gets done when, who’s going to do it, and when to switch course when priorities change. In the office, that would be your CEO; in the body at the cellular level, it’s your sirtuins.

Because they can only function with sufficient levels of NAD+, sirtuins become compromised as NAD+ declines. Back to our analogy: If sirtuins are a company’s CEO, then NAD+ is the money that pays the salary of the CEO and employees, all while keeping the lights on and the office space rent paid. Simply put, sirtuins manage everything that happens in your cells in order to keep the body as productive as possible, but their functionality falters as the NAD they need declines.

The bottom line on sirtuins is that when activated they help keep you younger by slowing down the aging process, but to do that sirtuins need NAD and NAD needs NMN and/or NR. As mentioned, in my case, I upend the argument about which molecule is a better NAD precursor by taking both NMN Pro Powder and either Tru Niagen or Basis for NR. You may consider doing the same.