Here Come “The Bay Lights” — Can The Bay Bridge Finally Earn Some Respect?

The Bay Area lights up tonight, March 5, 2013, and over the next two years as the San Francisco-Oakland Bay Bridge gets dressed up in individually programmed 25,000 LED lights. Here’s the story and links to the show. 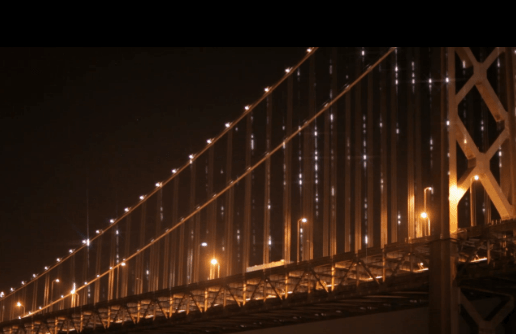 THIS POST is a call out to my sister and the San Francisco Bay Bridge, the forgotten one.

Yes, the Bay Bridge that reaches over San Francisco Bay and connects San Francisco to the East Bay (Berkeley, Oakland, etc.) is often overshadowed by its better known and – many would say – more magnificent partner, the Golden Gate Bridge, which every day suspends thousands of vehicles, bicyclists, runners and walkers over the mouth of San Francisco Bay as it opens to the Pacific Ocean.

Perhaps it’s because it bridges the gateway to the Pacific, or was for nearly 50 years the longest suspension bridge in the world at 1.7 miles, or because it connects San Francisco to bucolic, wondrous Marin County, specifically, Sausalito, my home, that the Golden Gate Bridge humbles its little brother (though the Bay Bridge is longer at 4.5 miles).

A forthcoming two-year LED light show is set to challenge this inequity.  Or at least close the popularity gap.  Because the Bay Bridge is about to get an illuminating polishing of sorts, starting tonight, March 5, 2013.

The project is simply called, “The Bay Lights”.

“The Bay Lights is the world’s largest LED light sculpture, 1.8 miles wide and 500 feet high. Inspired by the Bay Bridge’s 75th Anniversary, its 25,000 white LED lights are individually programmed by artist Leo Villareal to create a never-repeating, dazzling display across the Bay Bridge West Span through 2015.”

Here’s a preview via an artist’s rendition:

Six of the eight million dollars required to construct and maintain this light show over the next two years has been raised, much of it from Bay Area luminaries such as former Googler and current Yahoo CEO, Marissa Mayer, legendary start-up financier Ron Conway and JP Conte, the Chairman and Managing Director of Genstar Capital. (List of Patrons.)

Despite the shortfall, the show will go on. (You can donate here.)

Which brings me to my sister, Kerrilyn.

I’ve had a bird’s-eye view of this project due to Kerrilyn’s role as Executive Producer/Director of this The Bay Lights project.  She’s one of a large, talented team of people committed to this prominent light project that is expected to be seen by billions of people via the media and online.

Speaking of online, do check out Kerrilyn and her team’s work starting tonight with the “Grand Lighting Ceremony” at 8:30 PM right here.