Two anti-aging pills that are FDA-approved and may prove to extend the lifespan of humans are Rapamycin and Metformin.  In Part 1, we’ll examine Rapamycin, learn what the current science says about it, find out if you should try it. 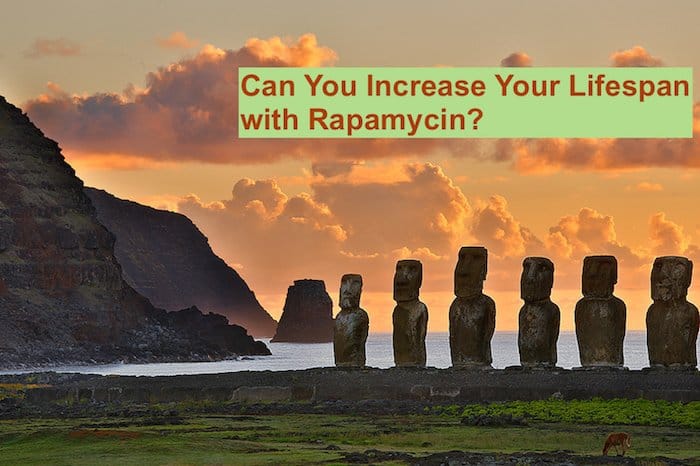 SINCE THE days of Ponce de Leon, the legendary Spanish Conquistador who searched in vain for the “fountain of youth”, the promise of life extension was exercised in the minds of many a dreamer.

Look up “anti-aging supplements” on Google (use the quotes) and (as of right now), you’ll get about 367,000 results.  Look up “anti-aging pills”, and you’ll get 70,300. Among all those are only two that are FDA-approved (although not for life extension, yet), and may increase your years on the planet.

First up is Rapamycin, and then in Part 2, we’ll check out Metformin.

In this article, we'll cover:

A Brief History of Rapamycin

About a year ago (February 2015), Bill Gifford, a Bloomberg columnist and author of Spring Chicken (a book on the science of aging) wrote an engaging article about the discovery of Rapamycin, and the story of the drug company Novartis’s efforts to make the first legitimate anti-aging drug. (1)

Bill Gifford wrote that Rapamycin was discovered in the early 1980s by Dr. Surendra Sehgal on the remote island of Rapa Nui, (“Easter Island”), about 2,035 nautical miles from Chile. Dr. Sehgal literally dug it up from the dirt under one of the iconic, monumental statues, called Moai, created by the early Rapa Nui inhabitants during the 10th-16th centuries.

It became quickly clear to Dr. Sehgal that in the dirt he dug up was a rare bacterium called Streptomyces hygroscopicus that had antifungal properties. Years later, he discovered Rapamycin also suppressed the immune system, which after many studies and trials lead to the Food and Drug Administration (“FDA”) to approving it as a drug for transplant patients.

Why use Rapamycin for transplant patients?

One of the most significant dangers for someone who gets someone else’s organ is that his or her immune system will regard the freshly installed organ as an invader. The immune system doesn’t recognize this new occupant as “us” but “them”, and thereby tries to destroy it. Rapamycin suppresses these immune system urges.

Not only has it been good for transplant patients, but derivatives of Rapamycin have also been effectively used for various kinds of kidney, lung and breast cancers. Now scientists believe that it might just be able to delay the onset of chronic diseases associated with aging, such as Alzheimer’s, cancer and heart disease, and extend your lifespan as well.

This life extension capacity of Rapamycin has already been demonstrated in studies on worms, mice and monkeys (2), which begs the question:

“Can Rapamycin make humans live longer and healthier too?”.

The answer to that question cannot yet be definitively answered, but what we can do is examine how human lifespan could be increased via Rapamycin’s disruption of the so-called “m-TOR cellular pathway”, and examine if it makes sense for you to experiment with it.

How mTor and Autophagy Influence the Aging Process

Before I read Bill Gifford’s article, I was befuddled about how I could describe mTOR so that it could be understood. An acronym for “mechanistic (or mammalian) target of Rapamycin,”, Wikipedia defines mTOR thusly:

I don’t get what all that means, either, so let’s welcome Bill Gifford’s analogy:

“MTOR is like the circuit breaker in a factory: When it’s activated, the cell grows and divides, consuming nutrients and producing proteins. When mTOR is turned down, the “factory” switches into more of a conservation mode, as the cell cleans house and recycles old proteins via a process called autophagy.” (4)

In a minute, you’ll learn that this “autophagy” thing is key, but before that, don’t you wonder why mTOR is a problem given that it helps cells grow by enabling the absorption of nutrients?

Turns out that there are different types of mTOR, which collectively are referred to as mTOR Complex (“mTORC).  Some may be more problematic (or beneficial) than others. MTORC1 is the type that’s most understood, and is the one that may cause or accelerate various age-related chronic diseases. (5)

Turning to another author who can help us with an analogy, Dr. James Watson puts it this way:

“Autophagy is like having a Pac man inside each of your cells that chases down, consumes and recycles dysfunctional organelles, proteins and protein aggregates.” (6)

At this point we know that autophagy is good. We want more of it. The problem is, like a lot of bad things that happen as we age, cellular autophagy declines over time.

In her article, Autophagy and aging – keeping that old broom working, Dr. Anna Maria Cuervo of the Albert Einstein College of Medicine reviewed the genetic evidence in support of tight connections between autophagy, health span and aging.

She made these observations about autophagy and age-related disorders:

Note that each of the age-related disorders that Dr. Cuervo lists is augmented by inhibition of autophagic activity by mTORC1 signaling; meaning that when this type of mTOR (mTORC1) malfunctions, it compromises the capacity of autophagic process to clean up the cellular debris that can lead to chronic disease and various issues associated with aging.

As mentioned, Rapamycin has been demonstrated to induce autophagy by inhibiting the mTORC1 pathway, and thereby increase lifespan in various animals studied. The research indicates that Rapamycin can increase the lifespan in mice up to 30%, which has major implications for humans. (7)

A study led in 2009 by Dr. David Harrison of Jackson Laboratory in Bar Harbor Maine showed that mice at an age equivalent to a 60-year old human given Rapamycin increased lifespan by nearly 10% for males and 15% for females, as compared to same-aged mice given the same diet without the drug. (8) Yes, their lifespan extension was far less than the above-cited study, but note that the Rapamycin intervention wasn’t given until the mice were well into the last quarter of their normal life span.

Bill Gifford’s article presents this fine graph that illustrates the tale, although this one depicted the results of a different study: (1) 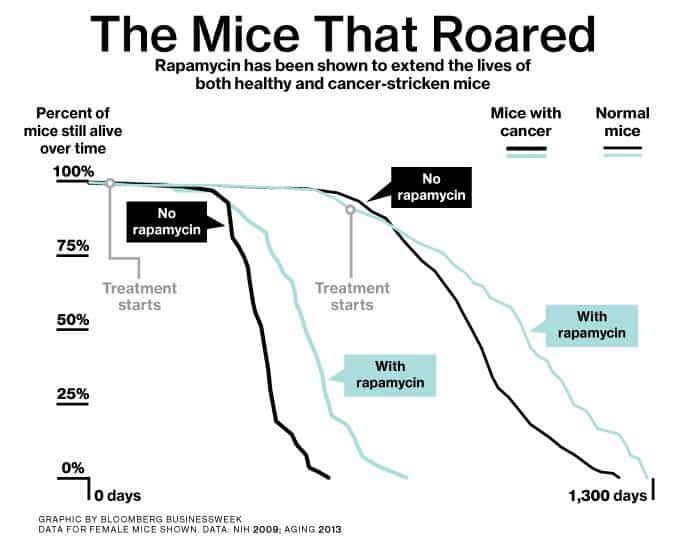 As the graph indicates, mice with cancer and those cancer free lived longer when treated with Rapamycin.

Should Rapamycin Be Part of Your Longevity Program?

It looks promising, it’s exciting, but the big question is: Should you take Rapamycin?

Quick answer: No, not yet. Rapamycin has unwanted side effects.

Long term use of Rapamycin, approved for use in several disease indications, has had side effects such as canker sores, impaired wound healing, weight gain and glucose insensitivity (which could lead to diabetes) – raising questions about its use to prevent the chronic diseases of aging. That said, it’s notable that researchers at the Buck Institute for Research on Aging have discovered new insights into how rapamycin inhibits the nutrient signaling pathway mTOR, a finding that could provide a way to avoid or eliminate side effects of the drug. (9)

Unless you have specific health issues that Rapamycin might successfully address and are prescribed it and monitored under the care of a doctor, stay clear of it.

If you’re the daredevil type and insist on trying it, do it intermittently.

According to a study published in Nature Cell Biology, intermittent dosing with Rapamycin selectively breaks the cascade of inflammatory events that follow cellular senescence, a phenomena in which cells cease to divide in response to DNA damaging agents, which include many types of chemotherapies. The finding, published in Nature Cell Biology, shows that once disrupted, it takes time for the inflammatory loop to reestablish, providing proof-of-principal that intermittent dosing could provide a way to reap the benefits of Rapamycin while lessening safety issues associated with its use. (10)

Buck professor Judith Campisi, PhD, and the senior scientist on the study, said

We think this could provide a paradigm shift in the treatment of age-related disease, including cancer. Imagine the possibility of taking a pill for a few days or weeks every few years, as opposed to taking something with side effects every day for the rest of your life. It’s a new way of looking at how we could deal with age-related maladies…

We have yet to fully understand why suppressing the mTOR pathway via rapamycin increases lifespan and healthspan in mice. This work helps illuminates the puzzle. Perhaps the mice are living longer because they have less overall inflammation, and maybe intermittent dosing will make it possible for us to use it more widely in humans. (10)

I’d like to point out that in a recent article of mine, I presented a quote from an article published in Nature in 2016 that announced a cause and effect relationship between cellular senescence and autophagy, which basically asserts that:

“The regenerative functions of cells decline with age, leading to an irreversible senescence state. Autophagy can keep some of this from happening by reinstating in old cells their former capacity as young cells to maintain proper protein regulation (“proteostasis”), mitochondrial function and oxidative stress repair.” (11)

Yes, we’ve circled back to autophagy. Rapamycin can bump up autophagy, but so can caloric restriction, still the only assured way to increase lifespan. The good news is that you don’t have to restrict your caloric intake all the time to get the benefits. If this is a topic of interest to you, please read:

11 Ways To Increase Your Lifespan, and

Why Intermittent Fasting Is Your Ticket To A Long and Healthy Life.

In my next article, we’ll take a look at another FDA-approved drug, Metformin, now widely used by diabetics that may have lifespan expanding properties.

P.S. While researching this post, I came upon Bill Gifford’s article, which I’ve referenced several times because it’s quite good and informative. I also bumped into his book, which I just purchased. Check it out: