Are You A Bit Addicted to the “Holy Trinity” of Salt, Sugar and Fat?

With health of Americans rapidly declining as quickly as their girth is expanding, the junk food industry is under the microscope.  What investigators are uncovering is reminiscent of the tobacco industry: Addicts are good for profits. Watch the two videos.

YOU NEED only glance around a supermarket to quickly get that most of the “food” offered Americans is manufactured.

You’ll see the perimeter of the supermarket stocked with veggies, fruit, dairy, and meat – the things that mostly look like they did on the farm.  In the vast middle will be stocked everything else, the manufactured food.

What I mean by “manufactured” is that the adulterated food contained in boxes, jars and cans has no resemblance to its former life as real food before it was processed, denatured, pulverized, enhanced and mixed with a bunch of other non-food stuff to become the contents of said boxes, jars and cans.

This is by design and is highly profitable to the manufacturers of such “food”.

They spend millions of dollars to get to the “Holy Trinity”, the ultimate destination of manufactured food makers.

In the above video, he describes the “Holy Trinity”.

The Holy Trinity is based on the Three Pillars of sugar, salt and fat.

The Holy Trinity are:

When the Holy Trinity is achieved, consumers of manufacture food find it irresistible, because this combination of the Three Pillars – which were never intended by Nature to go together – is addictive.

Think that the some in the manufactured food industry are different from the tobacco industry?

As Lays Potatoes would say:

The reason many people cannot “eat just one” is demonstrated by brain imaging machines.

Francis McGlone, a former food scientist and neuroscientist routinely tests how the pleasure centers of brains “light up” when a person eats Holy Trinity food.  These are some of the very same parts of the brain that are turned on by cocaine and other drugs.

So, if you haven’t already, watch the video presented above.  Get educated about what’s happening to you when you eat manufactured foods.

Learn about “sensory specific satiety” and “vanishing caloric density”.  And if you think this is overblown, check out my post,

What’s Making Us Fat and Sick?

It’s full of graphs, charts, explanations of complex and simple carbohydrates, and quotes like this:

“Today, each year an average American consumes between 110 and 156 pounds of sugar. At the end of the 19th century that number was just five pounds.”

Want to learn more about the dangers of manufactured food?

In a hurry?  Read the transcript.

Have a salt habit?


“Salt Linked to immune rebellion in study”, is an article by BBC News Health and Science reporter James Gallagher, who writes: 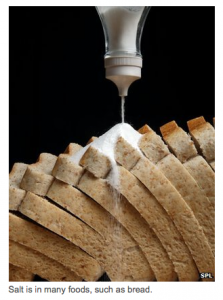 “The amount of salt in our diet could be involved in driving our own immune systems to rebel against us, leading to diseases such as multiple sclerosis, early laboratory findings suggest.”

Please share this information with those you know are eating too much from boxes, jars and cans.