If you could take a supplement that could help you age better, keeping you healthier, longer — wouldn’t you take it? Here are four natural compounds that can’t completely eliminate senescent cells, but just might give you a head start while biotech companies scramble to find the ultimate Senolytic drug. Read and listen up.

JUDGING BY the flow of investment dollars into anti-aging research, longevity is increasingly becoming a robust area of study in the scientific community. And one major effort is to eliminate senescent cells.

Billions of private investment dollars have been spent on funding various longevity start-ups, such as Juveon, Calico, Human Longevity and Unity Biotechnology, which just announced the completion of their $55 million Series C financing, bringing Unity’s total funding to $217 million.

Why are investors putting so much money into Unity, a company that has yet to earn a profit?

Answer: Unity has a lot of smart people working on ridding us of cellular senescence, which just happens to be the focus of this article, and well worth learning about, because:

Cellular senescence is a major cause of aging and the various chronic diseases that accompany it.

Unity is focused on a drug category called “Senoytic drugs“, and in this they’re not alone — many researchers are studying the potential of Senoylitics to eliminate senescent cells. Although the dream might be to one day have a pharmaceutical drug you can pop into your mouth that will relieve you of aging, it’s a long way off, if ever. In the meantime, there might be something you can do right now to take you in the right direction.

In this article, we’ll cover:

How Senescent Cells Age You

What are senescent cells and why would a biotech company focused on extending lifespan focus on them, you ask?

There’s a good reason that Unity Biotechnology is liberally funding research devoted to eliminate senescent cells. As Unity puts it,

Cellular senescence is a natural biological state in which a cell permanently halts division. As senescent cells accumulate with age, they begin secreting large quantities of more than 100 proteins, including inflammatory factors, proteases, fibrotic factors and growth factors that disturb the tissue microenvironment.

These senescent cells’ secretions instigate the formation of various functionally aged and/or diseased tissue that underlies a variety of age-associated diseases. 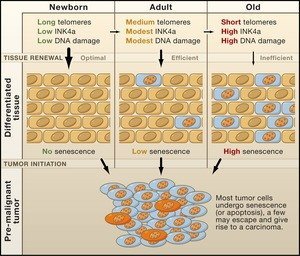 Chris Wiley, Postdoctoral Research Fellow at the Buck Institute for Research on Aging, writes in his article, Aging Fundamentals: Cellular Senescence, that senescence is complex, and consists of many changes to the nature of the cell; among them:

Permanent arrest of cell division – This is the key characteristic that defines senescence. Upon becoming senescent, the cell will never divide again. This prevents it from ever becoming a cancer cell, and most cancers feature mutations that prevent those cells from becoming senescent, which isn’t a good thing, because it means that cancer grows can keep dividing.

Epigenetic changes – Senescent cells fundamentally change the way that their genes are expressed by altering the structure of their nuclei and chromatin. Following induction of senescence, cells undergo a complex change in nuclear structure, including a distortion known as “nuclear blebbing”. In this way, senescent cells resemble those of children that suffer from the premature aging disease known as Hutchinson-Guilford Progeria Syndrome (HGPS). “Changes in the shape of the nucleus are indicative of a range of pathologies, including the premature aging disorder” says Dr. Monica Olvera de la Cruz.

SASP excrections – Senescent cells secrete a myriad of factors with potent biological activities. This senescence-associated secretory phenotype, or SASP, is the most potentially damaging effect of senescent cells. While senescent cells account for less than 10% of total cells in aged tissues, the SASP allows these cells to play a much larger role than their relatively small numbers would otherwise suggest. It is hypothesized that this aspect of senescent cells is what drives aging or age-related conditions.

Thus, this task to eliminate senescent cells is not some skip in the park, as previously noted by the hundreds of millions of dollars chasing a solution, some focused on Senolytic medicines of one sort (drugs) or another (supplements). 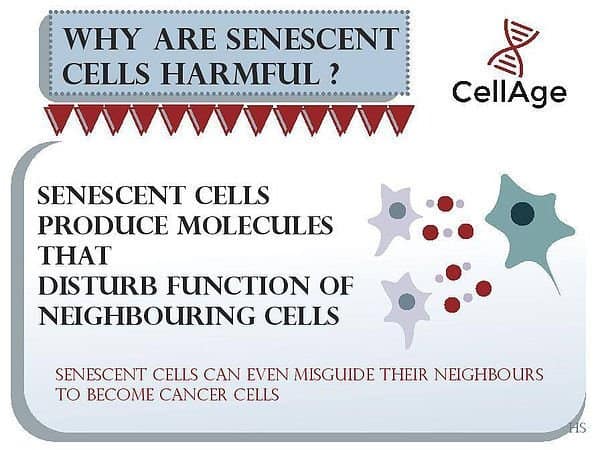 Unity Biotechnology believes the elimination of senescent cells will remove SASP factors (see definition above) — addressing a root cause of diseases of aging. To do this, their focus is on “Senolytic medicines,” medicines believed to able to halt or reverse particular diseases of aging.

Sure would be nice to be able to pop a pill right now that could eliminate my senescence cells.

Dream on, grasshopper, cause it’s gonna take awhile before that particular pharmaceutical drug is available, but there may be another option to explore in the meantime.

Are There Senolytic Supplements That Work To Eliminate Senescent Cells?

The whole point of my two-part series, beginning with Part 1: Can New Senolytic Drugs Delay Aging? was to say:

The three Senolytic supplements fleshed out in Part 2 were:

But now four other natural, potential supplements possessing Senolytic properties have been added to the bunch. The story about these four begins with a partnership between a life extension advisory group/supplement company (Life Extension Foundation) and a biotech firm (Insilico Medicine).

“Life Extension is one of the largest organizations dedicated to investigating every method of extending the healthy human life span. When seeking anti-aging therapies, health and nutrition, we have reported discoveries in the areas of atherosclerosis and stroke prevention, diabetes, prostate health, hormone replacement therapy, and other health concerns. Life Extension’s goal is to conquer the aging process within the next decade.”

Here’s Insilico Medicine’s take on themselves:

“Our Mission is to extend healthy longevity through innovative AI solutions for drug discovery and aging research. We aspire to be a leader in the field of deep learning for drug discovery, personalized healthcare, and anti-aging interventions.”

Did you notice that “AI” part?

Insilico uses Artifical Intelligence (AI) in some proprietary fashion for drug discoveries, and this methodology was used in partnership with Life Extension to make their Senolytic supplement, Ageless Cell.

According to Life Extension Magazine, Life Extension and Insilico Medicine researchers ran computer simulations of more than 200 potential geroprotective compounds and narrowed the list down to four, which they then used to create their Ageless Cell supplement. 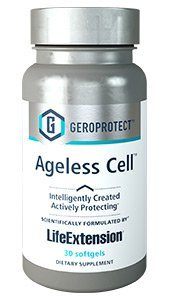 What is a “geroprotective compound”, you ask?

A “geroprotector” is any intervention that aims to increase longevity, or that reduces, delays or impedes the onset of age-related pathologies by hampering aging-related processes, repairing damage or modulating stress resistance.

As mentioned, scientists at Life Extension and Insileco discovered four such geroprotective nutrients that work together to beneficially influence key anti-aging pathways that combat numerous aging factors throughout the body: 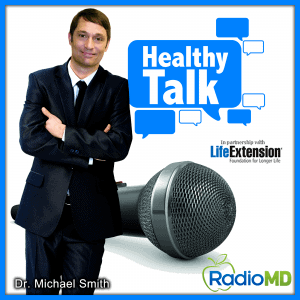 All of this gets me back to that first question:

Are there Synelotic supplements that work?

People that have skin in the game, say “yes”.

My view is that Senolytic supplements are worth taking, simply because:

a) they might work to reduce the aging effects cellular senescence; and

b) they generally improve health anyway, so there’s no downside from taking them.

That said, I only have experience using Quercetin, N-acetyl-cysteine, gamma tocotrienol and EGCG.

Since I’ve done no double-blind experiments on myself with any supplement, I can’t say what they have or haven’t done. I simply follow the science and do what I think needs doing. Therefore, I do intend to add Ageless Cell and the three Senolytic supplements I covered in Three Senolytic Drugs Available Now, which are really supplements, but are referred to as “drugs” in the research material I referenced in that article.

As listed above, these three are:

If you’ve been wondering what supplements might help you lengthen your healthspan, you now have some to consider.

Dr. David Sinclair Supplements For A Long and Healthy Life