Use your 23andMe genetic data to eliminate the guesswork about your ideal diet, supplements and exercise programs. (Save money too!)  Watch.

HAVE YOU ever done a back-of-the-envelope calculation about how much money, time and effort you spend on various diets, supplements and exercise programs — all without knowing for sure if they’re really going to help you?

Well, you’re not alone; here’s some figures for you:

Despite all this money and effort spent on our health, over 60% of adults living in the U.S. and Europe are overweight. It appears that there’s no return on this wellness investment.

My guess is that the money, time and effort spent on diets, supplements and exercise programs yields so little for so many is because of two fundamental issues:

This article focuses on #2. What I’m going to encourage you to do is to get personal, and what I mean by that is to:

I’m going to show you how to do it, and by way of example, use my friend Deborah’s DNA data and reports to tell you why you should do it. (Yes, she gave me permission in exchange for a long weekend in Paris.)

My hope is after looking at all that insightful, pertinent, actionable information revealed to Deborah from her genetics test, you’ll say, “I want what she’s having!”

In case you’re a bit rusty with genetics, let’s review some terms:

Here’s an illustration that may help conceptualize it:

There are two very important things to know about your genetics, both which stem from the concept that…

… Your genes are not your destiny!

The first thing to know about how genetics is Epigenetics, the study of changes in organisms caused by modification of gene expression rather than alteration of the genetic code itself. What this means is that your genes don’t represent some immutable dictate that governs your health concerns. Read my article, Behavior and Epigenetics – The Surprising Reasons Your Kids Care About Your Genetics if you’d like to learn more about it.

The second thing to know about genetics in the realm of gene expression is the topic of this article, “Polymorphisms.”

In her article, in her article, Genetic Polymorphism: What Is It?, Dr. Theresa Phillips tells us that the origin of the word combines the Greek words poly (meaning multiple) and morph (meaning form), resulting in a term used in genetics to describe multiple forms of a single gene that exists in an individual, or among a group of individuals.

SNPs, or “Single Nucleotide Polymorphisms” affect nucleotides within a gene, and are very common variations that we all have, but not necessarily the same ones. A SNP may or may not have functional significance. What we want is to find the SNPs that are significant.  This can be done by acquiring your 23andMe genetic data and analyzing it by such services as FoundMyFitness and LiveWello. The aim is to determine your genetic risk factors for various diseases. Armed with that data, you can do something about it.

Personalize Your Nutrition Based On Genetics

We’re fortunate that Dr. Rhonda Patrick made a video describing how we can use DNA tests to learn about our genes, how certain kinds of nutrients affect our metabolism and what we can do to minimize our chances of getting various diseases.

Dr. Patrick’s video breaks down, point-by-point, what gene polymorphisms you might look at, and how they relate to very specific micronutrients. Importantly, she focuses on the genes with common polymorphism that many of us have, such as these:

Dr. Patrick points out in her video that 23andMe stopped generating health reports after the FDA slapped their hand due to the perception that such reports were akin to diagnosing diseases and, as such, are the exclusive purview of the medical profession.  However, as you’ll soon see, they still offer some important wellness reports and, of course, provide the raw data that other services, like Promethease, FoundMyFitness, LiveWello and others can use to generate insightful genetic reports.

Next up is a look at the genetic data and reports you can get from 23andMe using my friend Deborah’s data.  Then we’ll see the other health reports can be generated at FoundMyFitness, run by Dr. Rhonda Patrick, and LiveWello; again, using Deborah’s genetic data.

As you scroll through the following screen shot from Deborah’s 23andMe page, note the following information her genetics test revealed that’s associated with body weight: 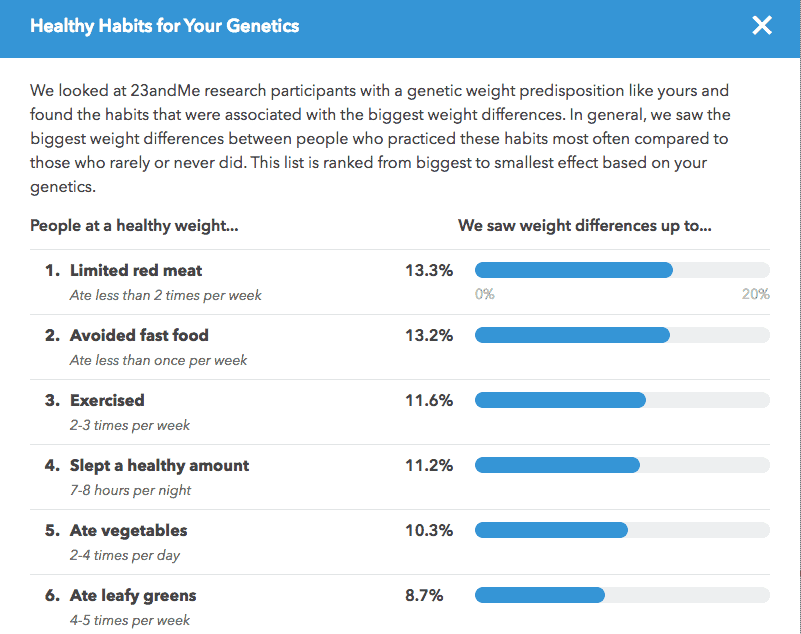 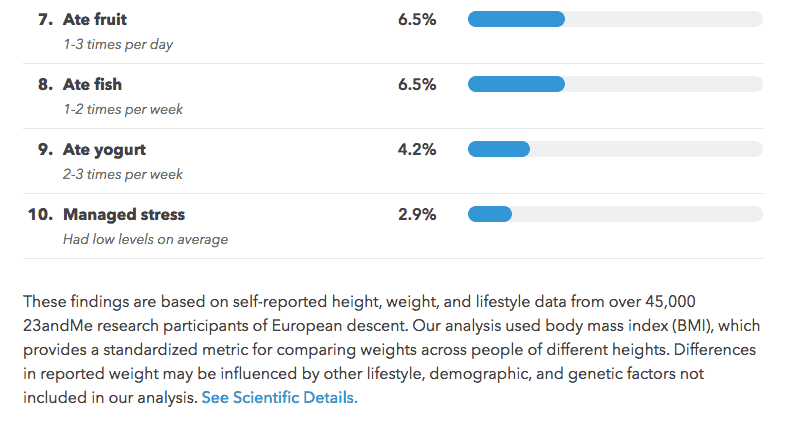 You might think that the 23andMe genetic data was valuable, and it is, but it’s just scratching the surface of what the DNA data can reveal. Websites like FoundMyFitness and LiveWello (see below) show you how to quickly upload your 23andMe genetic data, and then they analyze it and produce insightful and actionable reports.

As you’ll see in a moment, I opened the “Click to Read More” button in the report below concerning phosphatidylcholine levels, vitamin D and celiac disease, because many people are affected by having too little of the first two, or too much gluten causing the last.

In One Supplement to Boost Your Brain Power and Reduce Wrinkles, I wrote about 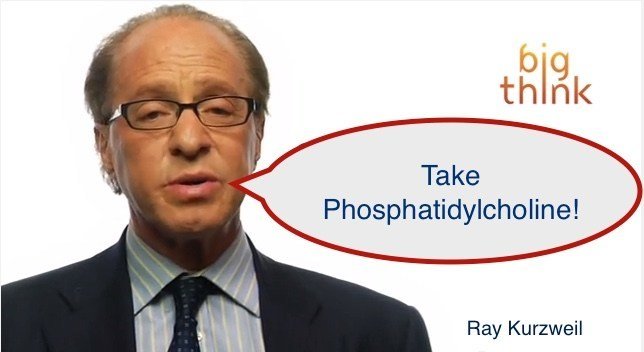 Turning to vitamin D, know that according to a Scientific American report,

Three-quarters of U.S. teens and adults are deficient in vitamin D, the so-called “sunshine vitamin” whose deficits are increasingly blamed for everything from cancer and heart disease to diabetes…

You may read more about this extremely important hormone (yes, vitamin D is actually a hormone, not a vitamin) in my article, 30 Reasons To Take Vitamin D.

Finally, the reason I chose to provide more information to you about celiac disease in the FoundMyFitness genetics report for Deborah is simply because you can not tread the isles of a supermarket in America without being bombarded by a staggering array of non-gluten foods.

So, what’s the problem with gluten?

Simply put, for some individuals gluten can exacerbate chronic inflammation in the gut, which then can lead to a cascade of unhappy health issues, such as SIBO (Small Intestine Bacteria Overgrowth). But we’re talking only about six percent of the population with gluten sensitivity, and only one percent with that actually have zero tolerance for gluten — those with celiac disease.

Thus, though it’s unlikely you have gluten sensitivity, much less celiac disease, I draw your attention to it given how much attention has been given it in the marketplace.

Now, finally, check out the genetic report for Deborah generated by uploading with a single click her 23andMe genetic data onto the FoundMyFitness gene-report-crunching tool. To read it more clearly, click the report and then click the magnifying glass icon.

Once you have received your 23andMe genetic data, if you want to get a FoundMyFitness report like the one above, just go here, sign-up and click one button that will upload your 23andMe data and then generate the report.

Last up is the LiveWello reports, which are most extensive I’ve found that make some sense to someone without a PhD in genetics. I’ve shared a few here: 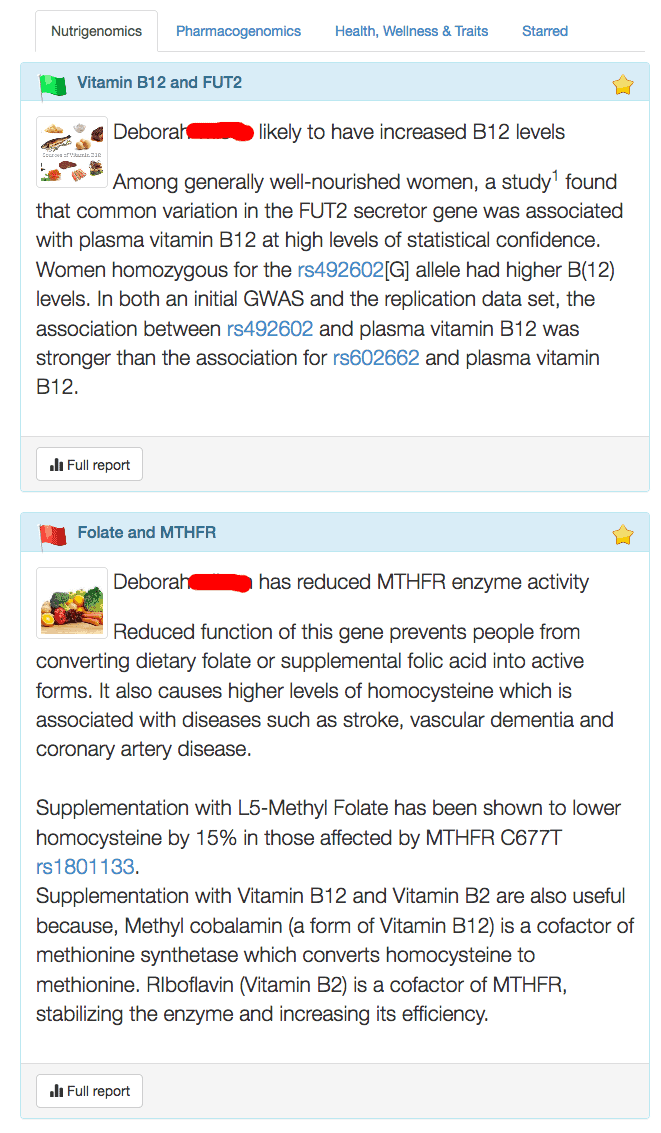 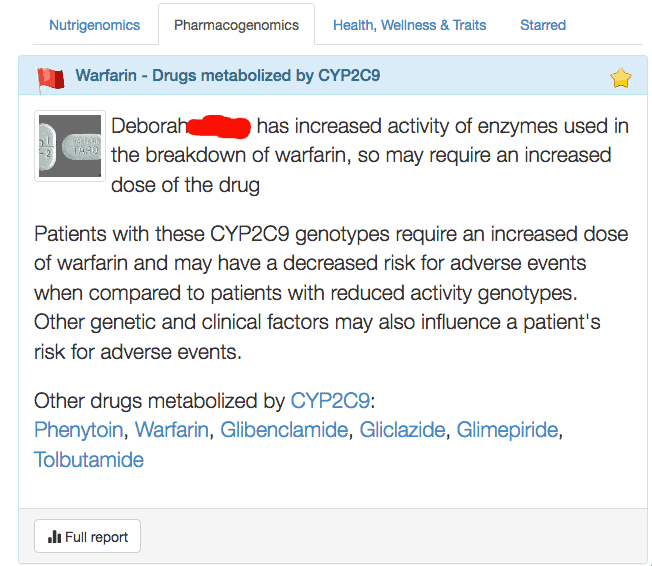 So, Deborah knows that she probably doesn’t need to supplement with vitamin B12, that she should check her homocysteine levels checked (a simple blood test) and if she ever needs a blood thinning drug (warfarin), she’ll need more of it than most.

This is a screen shot of a list of reports that LiveWello offers: 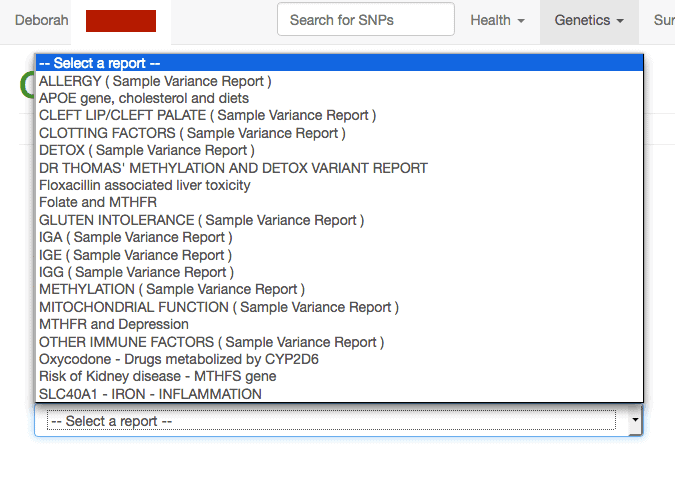 Here’s a silent video of how to use the LiveWello site:

As I just wrote above, once you have received your 23andMe genetic data, if you want to get any number of LiveWello reports, just go here, sign-up and click on the various reports you’d like to generate.